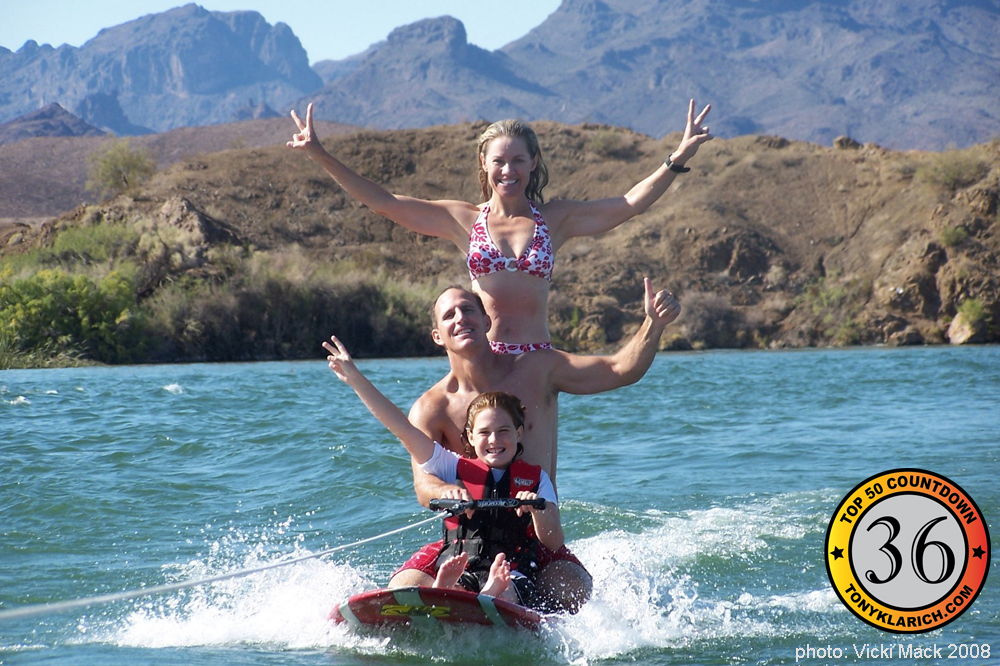 For several years in the 1980s we did a family watersports photo for our Christmas card. This was one was my favorites, set on the Parker Strip of the Colorado River. It was a little tricky for all three of us to do a deepwater start on this stand-up paddleboard (SUP), but with a little planning we were able to do it the first time. I have used this ride as “proof” for one of my 60+ documented rides in towed watersports (click on link below to see the master list in chronological order). 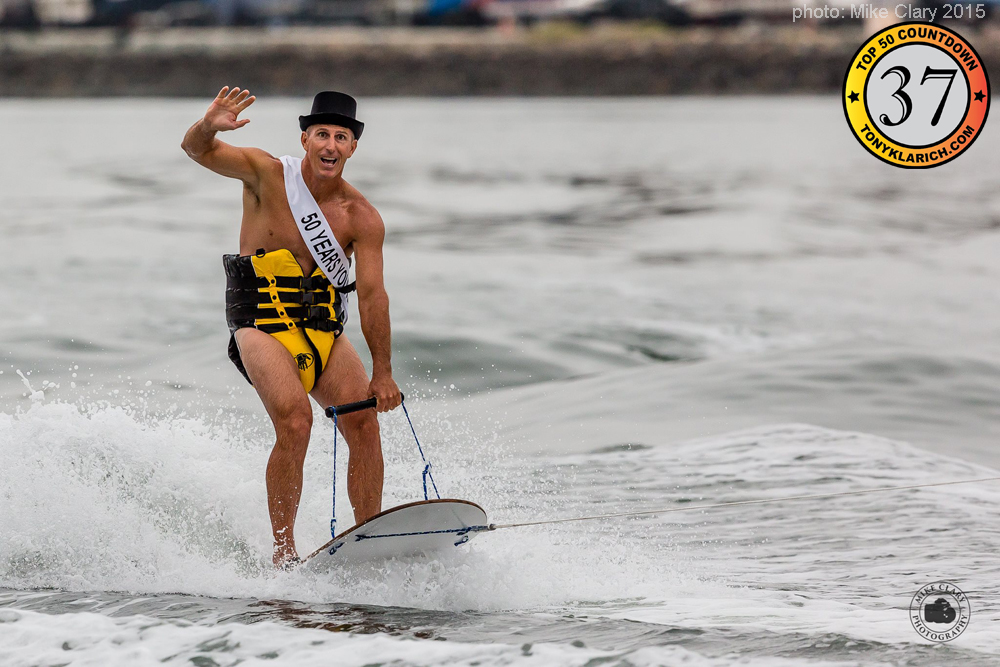 I kicked off my 50 for 50 ski event in 2015 with this ride on a Ski Skimmer, a device normally used to train 3-5 year olds how to ride. This one in particular was made by my friend Mike Mack, and is the same one I used to teach my son how to ride in 2003. But there’s even more meaning behind this ride…I dressed up as “Baby New Year”: a symbolic ride to start my event. My sash reads “50 Years Young.”

I don’t know why, but performing as a big baby always cracks me up. It’s so silly and fun, and the perfect way to feel young. This photo by Mike Clary was chosen as the cover shot by my local newspaper, The Friday Flyer. Check out the quality story and 10 more great color photos from the 50 for 50 by clicking on the link below.

50 50 for Story in Friday Flyer with Photos 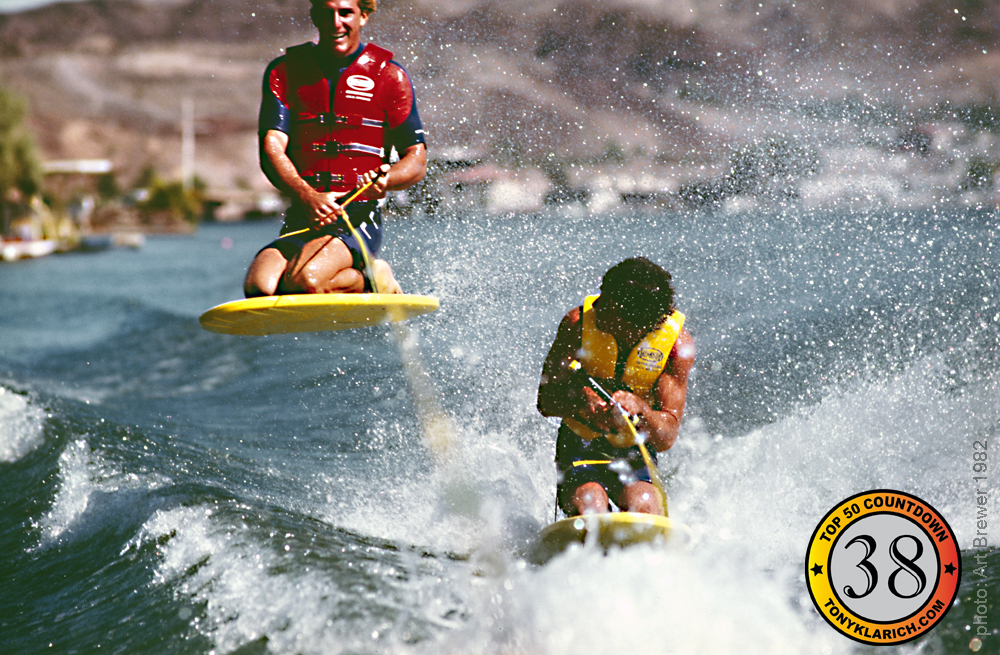 Uncle Mike co-invented the kneeboard in 1972, so it has always been a part of our family’s ski heritage. Mike hosted weekly ski shows to promote his shop on the Colorado River in the 1970s-1980s, and this act was always one of the crowd favorites. In the days before big wakes and towers it was always a nail biter to safely clear the rider down below. The biggest move was a wake 360 over the top, but the simple straight jump made for better still photos.

This was my first professional photo shoot by legendary surf photographer Art Brewer. A photo from this session became my first photo in a national water ski magazine in 1983. Soaring over uncle Mike was symbolic of our “sibling rivalry” in skiing. After years of trying my hardest I was finally starting to challenge him as the “top dog” in our skiing circles, both in kneeboarding and hot dog slalom skiing.

We are both riding the SM1 (Ski Master), a trick board designed by uncle Mike in the mid 1980s. 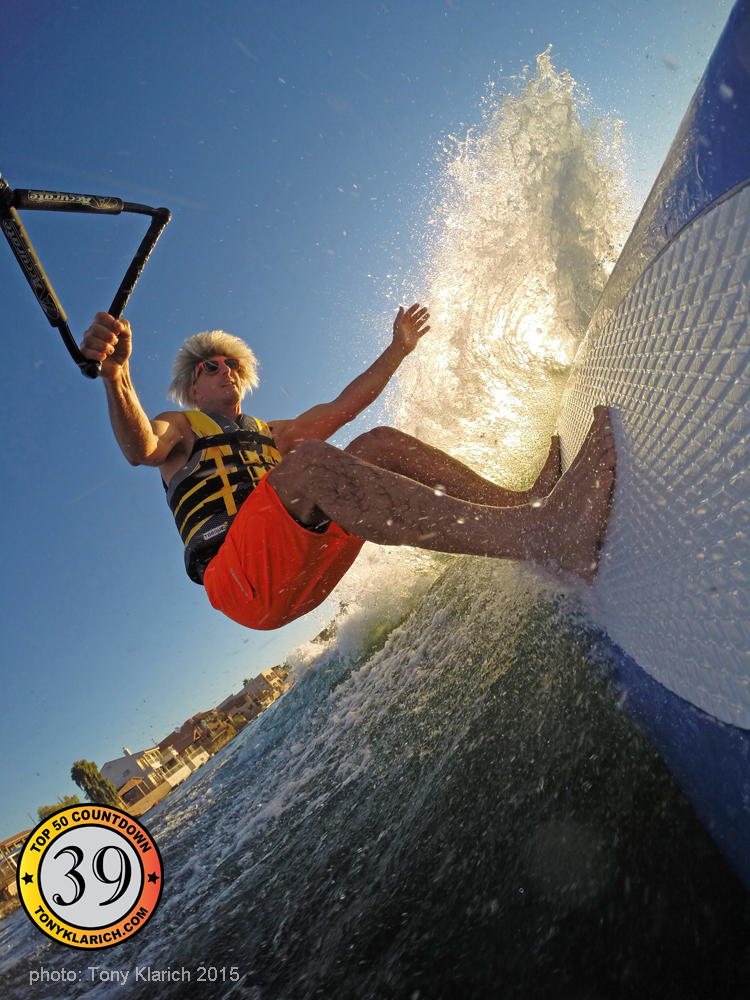 Kicking it off the lip during a beautiful fall afternoon on the Colorado River. I purposely directed the boat path so that the setting sun would shoot through the wall of water.

Riding a wakesurf board with a 25-foot rope is one of my favorite things to do when the water is rough…low speed, low impact, and the falls aren’t too bad! 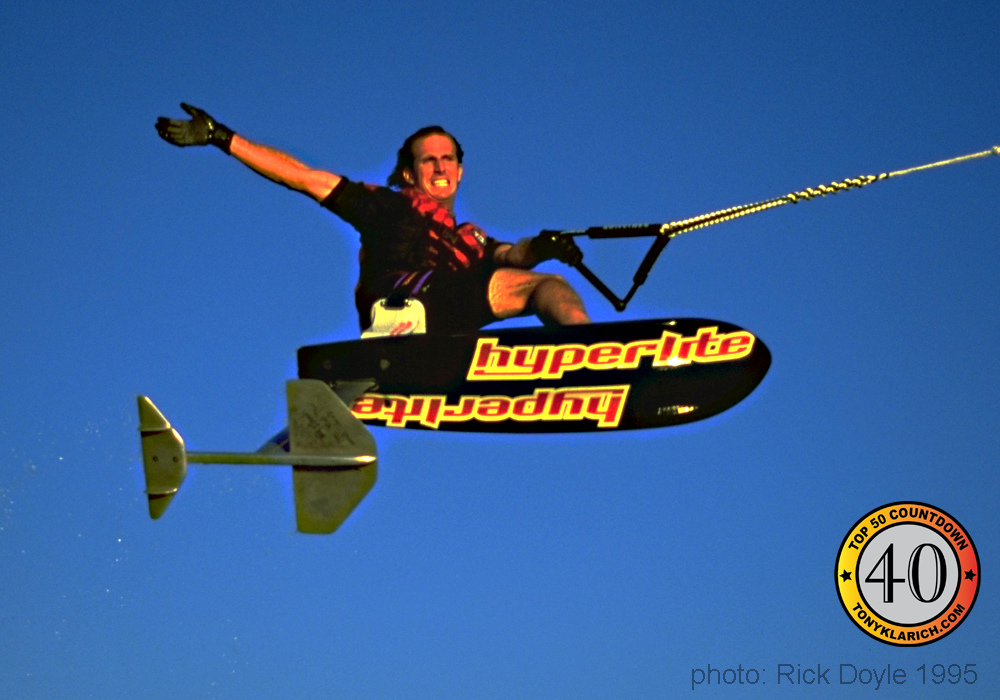 In the mid 1990s I was at the top of my game as a hydrofoiler, and heavily involved with Hyperlite wakeboards as a rider and promoter. Herb O’Brien (HO Sports) pressed the deck for Air Chair in his Seattle factory starting in 1989, and made this custom deck with the Hyperlite logo especially for me. The technology developed for making these Air Chair decks included the widest board in the industry at the time, and the use of full cloth graphics. The breakthrough developments on the Air Chair deck in 1989 were directly incorporated into the Hyperlite in 1991, the world’s first compression molded wakeboard.

In the days before GoPro, my photographer Rick Doyle used a full-sized water housing for his SLR camera, shooting rolls of film with 36 exposures. I jumped nearly over the top of Doyle to get this dramatic shot. I liked this photo so much that I eventually used it for several years as a main logo for Flight, the Hydrofoiling Newsletter.