A Love Letter to Cypress Gardens

A Love Letter to Cypress Gardens

email
For many skiers, the ultimate expression of water skiing emanates like a homing beacon from Winter Haven, Florida. It was there in 1936 that Dick Pope Sr, and his wife Julie opened Cypress Gardens, the first theme park in Florida. Once the ski shows were added a few years later, the park became internationally famous for not only its lush gardens but also for its beautiful and daring skiers who became the major attraction.

Dozens of dynamic ski records and firsts were beamed across the globe by Pope’s media machine. Cypress Gardens introduced barefoot water skiing, the swivel ski, the first 3, 4, and 5-high human pyramids, stand up hydrofoiling, wake surfing and so much more. 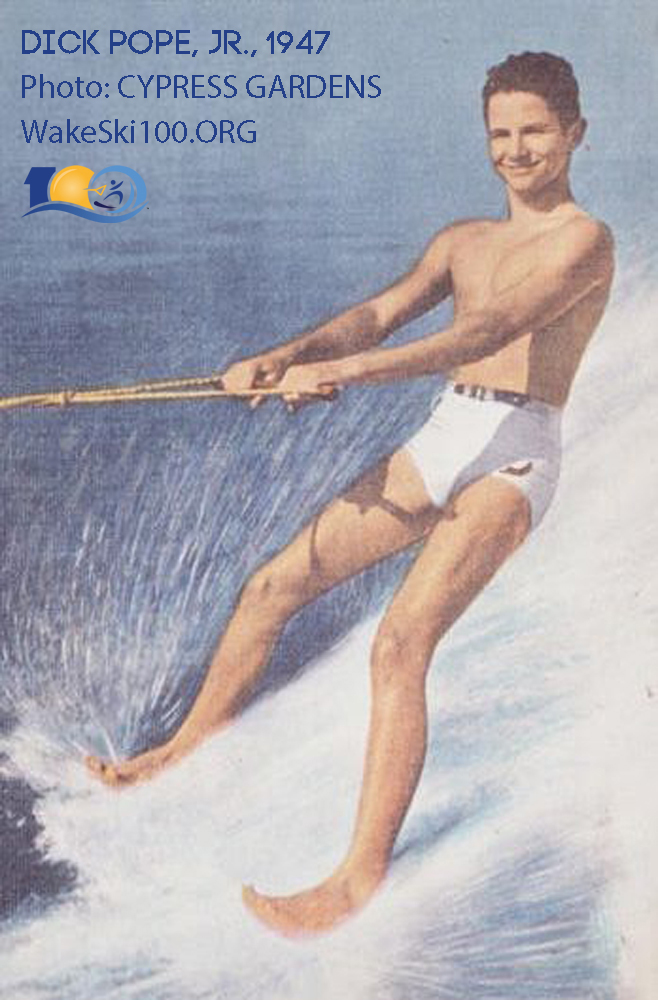 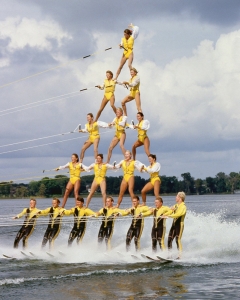 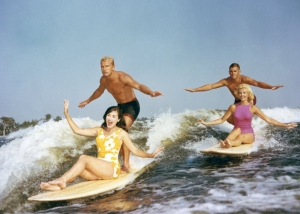 Wakesurfing at Cypress Gardens: a History by Tony Klarich

I am a dedicated skier, historian, and student of the sport and for decades have been enthralled by Pope’s films and photos. The 1953 feature film Easy to Love brought Hollywood to Lake Eloise. Elvis and Mahammad Ali made their way to the Gardens. TV specials were shot with stars like Johnny Carson, Carole Burnett and more. And then there were the amazing photos; tens of thousands of them, mostly shot with a large negative format Hasselblad camera – the same one used for the Apollo moon missions. Pope built a series of highly specialized photo boats called the Miss Cover Girl to put his teams of skiers and photographers in the perfect positions for timeless shots. The unique photo set up scored hundreds of magazine covers including Sports Illustrated and Life Magazine. 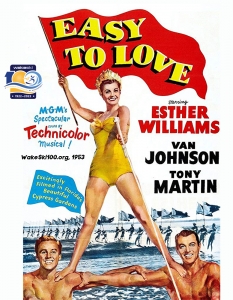 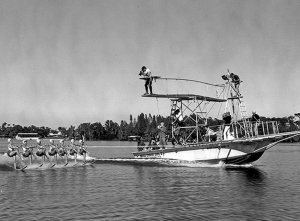 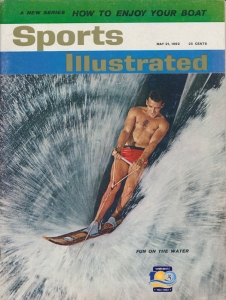 Maybe you’ve seen a few of these iconic images: Willa McGuire as the prima ballerina skier, Alfredo Mendoza riding a broomstick handle dressed as a witch (I did a tribute shoot for that one a few years back), guys and girls frolicking on the water, and of course the flag lines. These timeless images of wholesome fun in the sun are everywhere on the internet, often seen and easily found. Many have transitioned into the marketplace on everything from pillows to lamp shades. 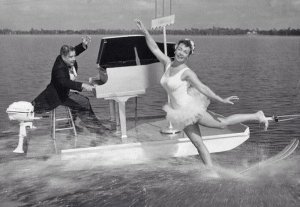 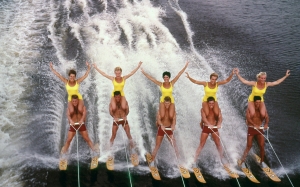 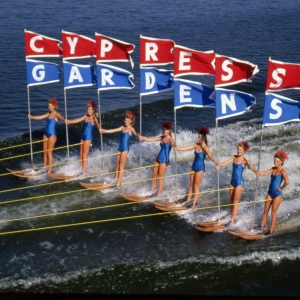 A Red White and Blue Salute to Cypress Gardens

For years I have dreamed of having a home in the area, specifically to carry on in the tradition of Dick Pope. The added bonus is that Winter Haven, and because of Lake Eloise is the “Water Ski Capital of the World”. I thought I would get around to moving after retirement but that’s several years in the future.

Meanwhile my chiropractor friend and classmate Terry Weyman gave me a call saying he had a pair of his father’s skis for me. I helped Terry become the Water Ski Pro Tour doctor in the 1980s. He went on to specialize in sports medicine for high level athletes in rodeo, bicycling, and for Olympic teams. On the day of the gift we met for a meal, recounting the good old days at chiropractic college and on the Pro Tour in what ESPN promoted as “Hot Summer Nights.” Finally Dr. Terry explained that his father had done some film work for Dick Pope back in the day, and that Dick Pope had personally given him a pair of Cypress Gardens Aqua King Combos as a thank you for good work. IN my world that makes them a Sacred Relic of Skiing. Of course I Would take good care of them for the Weymans.

Just a few weeks later I had the Aqua Kings out on a glass calm private lake, GoPro in hand. The images were special. It is amazing to think that a simple ride on a pair of combos could create such a compelling shot. I shared the image with Dr. Terry who was thrilled, and the posted it to the rest of the skiing world who ran up the likes on social media. 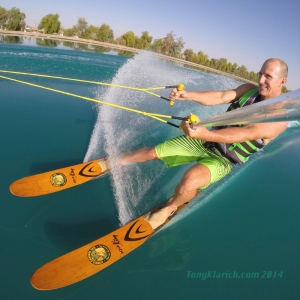 Now all that was left to do was complete the perfect circle.

In 2019 I received the Award of Distinction from the Water Ski Hall of Fame. The inductions were in Florida, and since my wife Tanya loves real estate, and I was hoping to retire in the area, we thought it we be nice to check out some houses. In short order we were recommended to Keith St. Onge who was at the inductions, recently retired from traditional barefoot competitions as longtime reigning champion, and now focusing on selling real estate. We planned to meet the next day for viewings. Later that night Tanya was researching properties online and came across a sweet home on Eloise. I jokingly said I would buy it for her!

The next day we met KSO and headed out to view 5 or 6 potential places he had found, with our last stop at the home Tanya found. The first few had potential, but our last stop on Lake Eloise was beyond words. We could have looked years and never found it a place like this. It was just a few houses down from the old Cypress Gardens (now Legoland) on the west facing side of the lake for breathtaking sunsets. It was a spectacular house built in the Key West tradition, with an oversized bar and dock area for skiing and entertaining, a lakeside jacuzzi, and stately Cypress trees draped with Spanish moss framing the historic lake beyond. 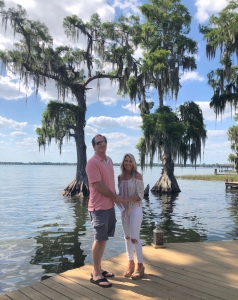 Buying a home was not on our radar, but we found ourselves at the perfect home. KSO and I talked about freeboard water skiing, while the Tanya and our friend Kathy dreamed of hosting weddings. I took a seat at the kitchen counter inside and it felt as if I had been there all my life.

Over the next 24 hours we thrilled ourselves with the possibility that we could pull it off, and somehow it seemed as if God lined everything up perfectly for us to own this home and do special things with it. Financial obstacles miraculously cleared in just hours and Tanya made a low but reasonable offer asking the owner to leave everything in the house.

It is hard to fathom that this home had been on an off the market for 10 years, with offers higher ours. We managed to get our story to the owner Gary that I was a long-time professional skier of note who wanted to transform the house and acre of grounds into a mini Cypress Gardens. Too bad the Mastercraft in the driveway was already sold, but we got just about everything else with no changes to our accepted offer. We viewed it on Sunday, Tanya made an offer on Monday, and it was accepted with no changes on Wednesday. The escrow lasted just 30 days and suddenly we found ourselves new owners! 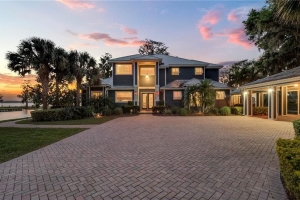 Thanks for buying it for me Tanya! 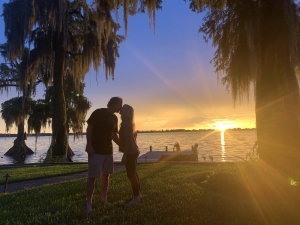 Sealing the deal with a kiss

It took a few months to get the grounds up to standards, and we struggled through learning how to run a short-term rental. It is way harder than I ever expected and I am thankful for my wife’s real job as a property manager. We have managed to partner with local skiers to assist the transformation: Keith and Lauren St. Onge, Joe Sawaska who has become our groundskeeper and concierge, Larry Gohn resurfacing the main dock, Nick and Jack Lyman with woodwork and general help. Our insurance guy is Dave Dershimer, who once acted as a water ski for Johnny Carson himself! There are so many more amazing friends and skiers – this place feels more like a community than any place we have ever been! 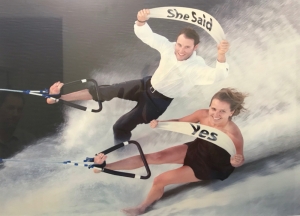 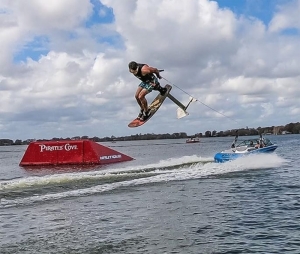 Joe Sawaska continuing the foiling legacy in the show course 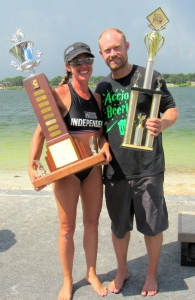 We work with WINNERS!  The Lymans 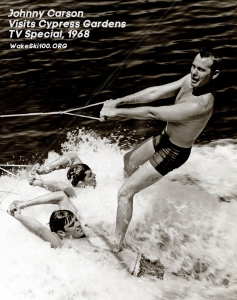 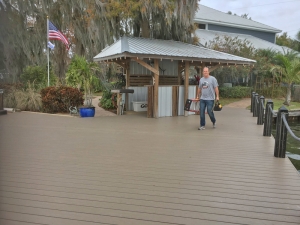 The story has come full circle now as the combo skis given to me in California by Dr. Terry have made their way all the way back to the Cypress Gardens Lake House Ski Room on Lake Eloise (far right). 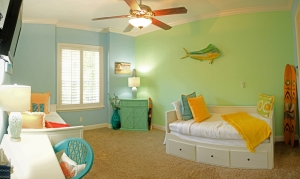 The “Ski Room” is a work in progress. The general vibe is light and fun.

We are working hard to share the story of the world’s most famous water ski lake and all that has happened here. We hope to extend that story with events and new rides of our own. We are already have a Wake Ski 100 Hydrofoiling event planned for April 24-26, 2020 and ministry work with In His Wakes. 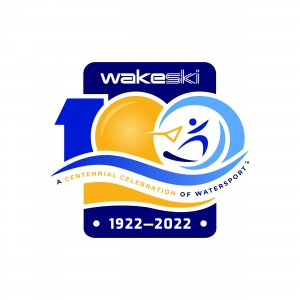 In future years I hope to create a workshop like Mr. Pope’s, where all the crazy ski ideas in my head can be manifested and photographed on the hallowed waters just outside our door. Our dreams are big, from building a Florida Pool on our property to creating a Cypress Gardens Experience with vintage equipment and the next in line photo boat, Miss Cover Girl 6, we dare to dream that we can honor the past and carry on the legacy.

Cypress Gardens, I love you!

PS Tanya you too!

In His Wakes Ministry