Big air was always a big deal in hydrofoiling. In the earliest days without a seatbelt Bob Woolley jumped the highest. Mike added a seatbelt to the Air Chair, and vaulted past Bob for top honors. Then Mike and Jon Wilborn went at it for years. But no one really knew how high riders were jumping until Flight Worlds held the first Big Air contest in 1998. My friend Ron “Air Boom” Stack stepped up to sponsor the Big Air event, so I left it up to him to come up with something to measure the jumps and promote his product. Ron built a 20-foot tall extended pylon, and mounted it on his 1967 banana colored Ski Nautique, “Old Yeller.” It wasn’t perfect, but with multiple judges and video playback we crowned the first Big Air World Champion, Mike Murphy with a leap of  17′6″measured at the highest point.

At the following Flight Worlds we tried to improve the way big air was measured, so I turned to John Clemmons to create a system to judge the riders. He rigged up a floating dock with a pole-vaulting frame, a sport in which he was still involved. In between the frame we strung a series of stretchy bands at intervals of one foot. The grid measured jumps of 15 to 20 feet high, and was 20 feet wide. Qualified jumps had to be within the grid, and competitors had to ride them out. Video was used to replay the jumps, and measure the highest point each rider cleared within the grid. The floating dock was considerably more difficult to set up than the single boat with a tall pole ised in 1998, but the width of the course and video replay gave a much more accurate result. That year Brian Vesely cleared 20’6” for a new World Record. 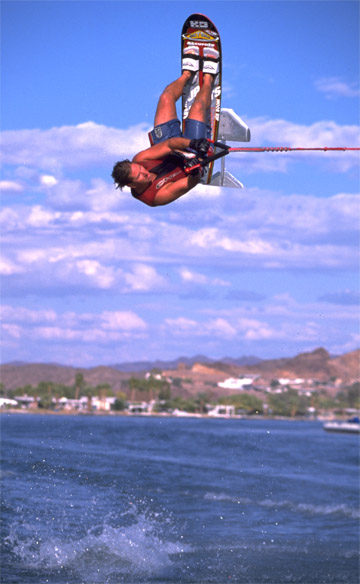 At the Flight Worlds in 2002 Damon Moore was finally able to come through in the clutch for a victory with one of his enormous laid out front flips. Trevor Sudweeks and Geno Yauchler rounded out our list of Flight Worlds Big Air Champions in 2003 and 2004.

One of the problems of judging big air was that it was tough to set up a reliable course. Things moved around on the water, and the measuring devices were a chore to get on and off the water in a timely fashion. There was also endless debate about camera angle, and whether or not we even needed a measuring rig behind the riders.

The major breakthrough in measuring hydrofoiling big air came from the chance viewing of a TV show. Bryan Steele watched Parks Bonifay’s Double Up contest on the Fuel Channel. The wakeboarders used video frame count to measure their jumps. Bryan immediately developed guideline to adapt frame count for hydrofoiling, and announced it on foilfreaks.com.

Most video cameras shoot at a consistent frame rate of 30 frames per second (fps), so counting the frames of a jump became the indicator of total hang time. Bryan was convinced that it also was a reliable indicator of pure height, and had the mathematical formulas to support his view. The standard procedure for measuring frame count started at zero, when any part of the front blade broke the surface of the water. The last frame is when the foil first hits the water.

Now foilers had a frame of reference that measured jumps reliably. A rider in Texas doing a front flip could compare his height to someone in Switzerland.

The USHA Hydrofoiling Nationals in 2006-2007 were the perfect venue to implement frame count. The Nationals were organized by the Rocky Mountain Hydrofoil Club, and represented the premiere USHA event for foilers to test their skills against one another. The 30 fps video standard was not accurate enough, and cameras using 60 fps were used right from the start, giving increments of ½ frame.

The frame count method has since continued to be the gold standard for reliably measuring hang time, and using a mathematical calculation height can also be determined. Anyone with a video camera and a willingness to go big can join in the conversation. As of 2018 4 riders have officially topped 60 frames, at or exceeding 2 second of hang time! As of Jan, 2018 the record is 64 frames held by Ben Ferney.

In 2004 Billy Rossini set an official Guinness World Record for the “Highest jump on a hydrofoil.” Billy was one of the pioneers in developing the big air style of kneeboarding in the 1990s, so he was no stranger to charging it hard and letting it all fly.

Billy Rossini tearing it up on a hydrofoil and kneeboard

The Guinness crew came out to measure the record using survey equipment and triangulation. The highly calibrated lasers recorded very accurate measurements, which can be reproduced. Billy used a kicker wake from a large boat, and his jump was officially recorded at 23 feet from the water.

Billy’s Guinness World Record has come under question by some members of the hydrofoiling community ay large, questioning the use of a kicker wake, reproducibility for others to attempt the record, and what point of the jump (lowest point vs highest point) was used for measurement. I would respond as a rider not particularly interested in going for big air myself, that anyone who questions this result, especially the elite big air riders, should apply to break the record.

Guinness World Records: “Highest Jump on a Hydrofoil” (with application)