Mike is fond of saying that there never would have been a Sky Ski without Peter Schörno. When the legal battle heated up between Bob and Mike, Peter stepped in and gave Mike all the support he needed to flight the case, and when the legal drama was over he helped get Sky Ski off the ground.

Peter loved to Sky Ski, and became friends Mike after several lessons with him. Peter was from Switzerland, and he was able to travel the world for foiling because he was a successful entrepreneur in the gaming industry. His first big hit was a slot machine called Super Cherry. He built a lucrative business from there, developing even more slots, and eventually opening a string of casinos in Switzerland and the surrounding countries. Fortunately for those of us lucky enough to have been hydrofoiling at that time, Peter loved to share. He organized an annual trip for foilers starting in the mid 1990s that continued for about 10 years. My wife and I were invited to take two all expenses paid trips to hang out with Peter, and the experience was incredible. 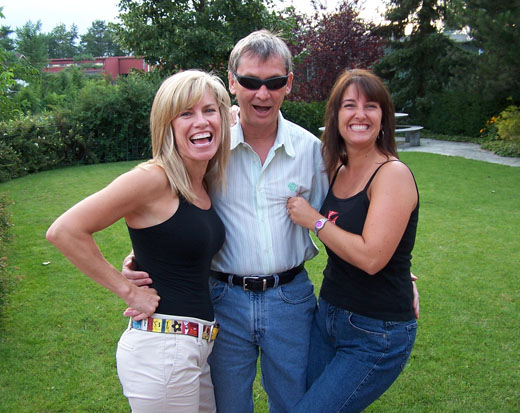 We flew business class on Swiss Air from LA to Zurich, Switzerland. The 10-day trip was a tour of Peter’s homes and toys, with plenty of riding and ski shows to boot. Peter collected fancy cars like others collect sporting equipment. He had a red Ferrari Enzo, Lamborghini, and lots of other exotic cars with hard to pronounce names. We’re talking $500,000 to $1.5 million each. One day I asked him how many cars he had, and it took him several minutes to figure it out. Even then he wasn’t sure. He had three cars at the house in Zurich, two at the house in the Alps…that’s how he came to an approximate number. Just the specialized license plates ran him in the tens of thousands of dollars. He often complained about the cars being uncomfortable to drive, and that their main function was “for the eyes.” 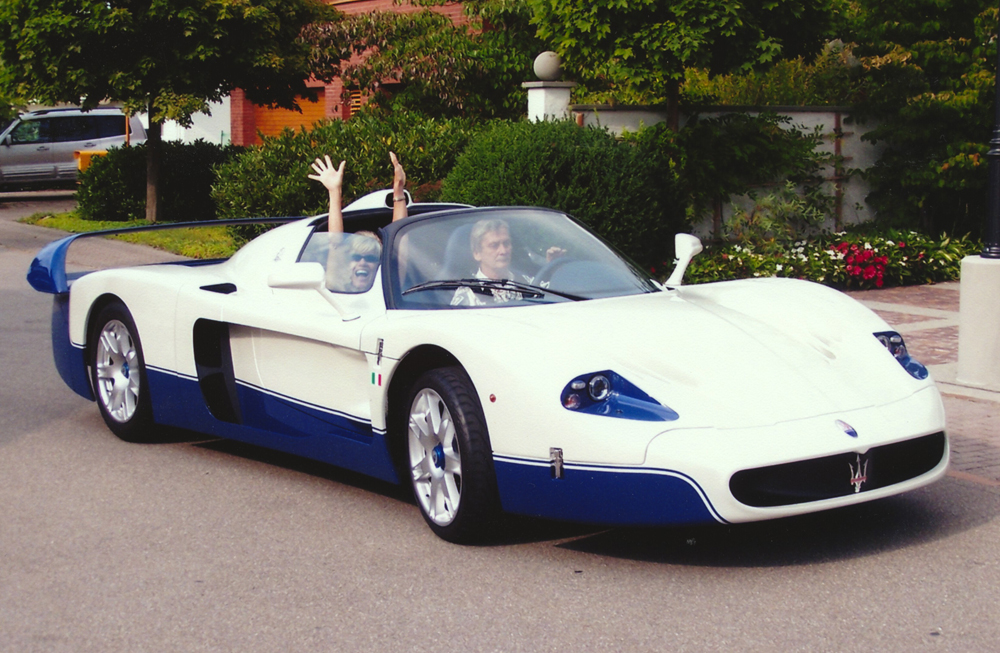 Peter takes Shonna for a ride in his Maserati (Klarich, 2005)

On one of our trips Peter planned a show on Lake Lucern over the mountains from his house on Lake Zurich. So we loaded up the gear into five or six of his best cars and headed through the Alps. Just one of these cars was enough to turn heads, but a caravan of them had people stopping, pointing, and staring. Peter and Swiss foiling champion Nino Iodice loved to rev the engines inside the numerous mountain tunnels.

For another show on Lake Geneva, Peter wanted to be able to fly us to the site. He didn’t want us to drive back to Zurich, so he chartered a special skydiving plane that was able to take off from the short runway at the local airport. We flew over the Matterhorn on our way there, and surprisingly it reminded me of the one at Disneyland. The show was another first for me. European women often sunbathe topless, and there were plenty of female fans barely able to contain their excitement.

The meals were always a feast. There was plenty of grilled meat and expensive red wine. Bruno was the pre-meal entertainment with traditional waltzes on an accordion. It took a couple of days to figure out that he wasn’t really playing, it was a computerized sound track and Bruno just hammed it up. On two separate occasions Peter cleared out fancy restaurants for our private dinner parties. It was five-star all the way. After one of our nights out Shonna and I were relaxing at Peter’s home. I had my hand on her big belly when our little “Poomba” kicked for the first time.

It was about this time that Mike and Jon Wilborn were battling it out for the King of Big Air. Mike trimmed his foil up for more lift and pop. Jon bumped up the speed. At the height of the challenge both guys were riding somewhere near 34 mph. I let them go at it, thinking that was way too fast to ride a foil. They were both going huge.

I chose to limit my riding speed to about 27 mph and a reasonable amount of air and hang time. It came back to my old philosophy about distance jumping versus freestyle jumping. Distance jumpers are always on the edge while freestyle jumping in a show is about being in control. When you constantly ride on the edge, there comes a time when you inevitably fall off, often with injury as a result. There is an element of risk in learning new moves, but once you have them down, it is pretty easy to stay in the safe zone. Pushing the speed and height was never something that motivated me. I was more about smoothness, consistency, and longevity.

But every so often you have to lay it on the line to prove that you can hang with the big boys. I went for the biggest air of my life behind Peter’s 50-foot Sunseeker speedboat with three 502 engines. The wake was so big that at first it seemed as if no one would even try and ride. So our day on the speedboat started out as just a pleasure cruise. But with a boat full of testosterone, it wasn’t long before Jon Wilborn, Mike, and I were trying our luck foiling behind the massive wake. The lip of the wake was almost head-high on the approach, and the nearly vertical drop-off on the other side was several feet. Forget about regular wake jumps. It was a lot easier to just go for a big roll and land in the flats. After a few “easy” rolls, I decided to really air one out with a giant front flip, certainly my biggest one ever, and the biggest jump of the day. My heart was racing for several minutes before and after the move. The guys always rode me about not always riding for big air, but that one move kept them in check for at least a year.

Peter was having so much fun he arranged for us to stay for a few extra days. The rescheduled return flight was the most expensive plane ride I have ever taken. It was so amazing I saved the receipt for all these years: $5,936 for a one-way ticket.

We had our second trip to Switzerland when our son was five years old. This time it was a smaller group including Keith and Honkala and his wife Sonja. It was all about serious riding this time, motivated mostly by Keith. We both pushed each other to try new tricks, and I did a new move on my Sky Ski all ten days of the trip. I’ll admit a few were Swiss cheese, but I did manage to land a wake wrapped helicopter to front flip combo (the “Super Cherry”), and heli to back roll to front flip combo (“X,Y, Z.”)

Nino Iodice, the top European foiler rode with us too. Marlise kept everything organized and our son K2 hung out with her daughter Nicole. Nino and Marlise owned the Fly-In Bar in nearby Bern. It was decorated with hydrofoiling memorabilia and included a mannequin of Mike Murphy on a Sky Ski. 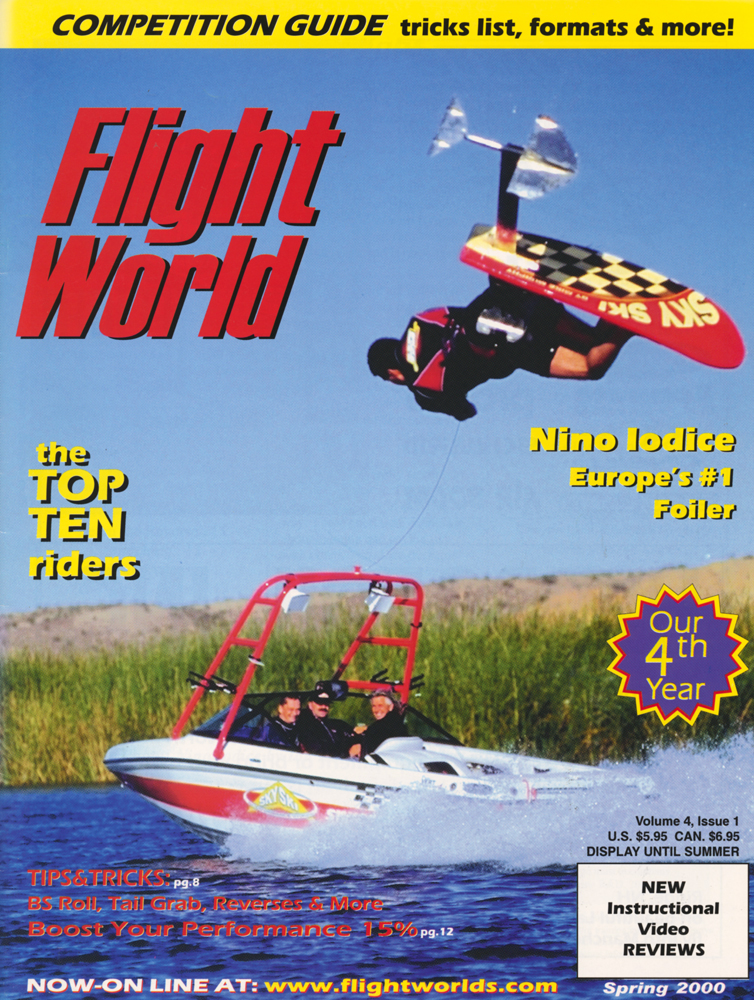 Nino took me out for the fastest car ride I’ve had to date. 120 mph in his yellow Ferrari seemed smooth and controlled, but when he pushed it up to 180 mph you could tell that things were serious. Once was enough for me!

We headed south to stay at Peter’s beautiful home on Lake Lugano, on the border of Italy. One afternoon we took the boat across the lake for ice cream in Italy. As we pulled up someone on shore was calling my son’s name. It was quite a surprise to run into fellow foiler Bryan Steele and his girlfriend Amy Devening, who just happened to be on vacation at the same spot. What a coincidence!

The Peter Schörno hydrofoiling trips with family and friends were a lifetime experience that we will be forever thankful for. 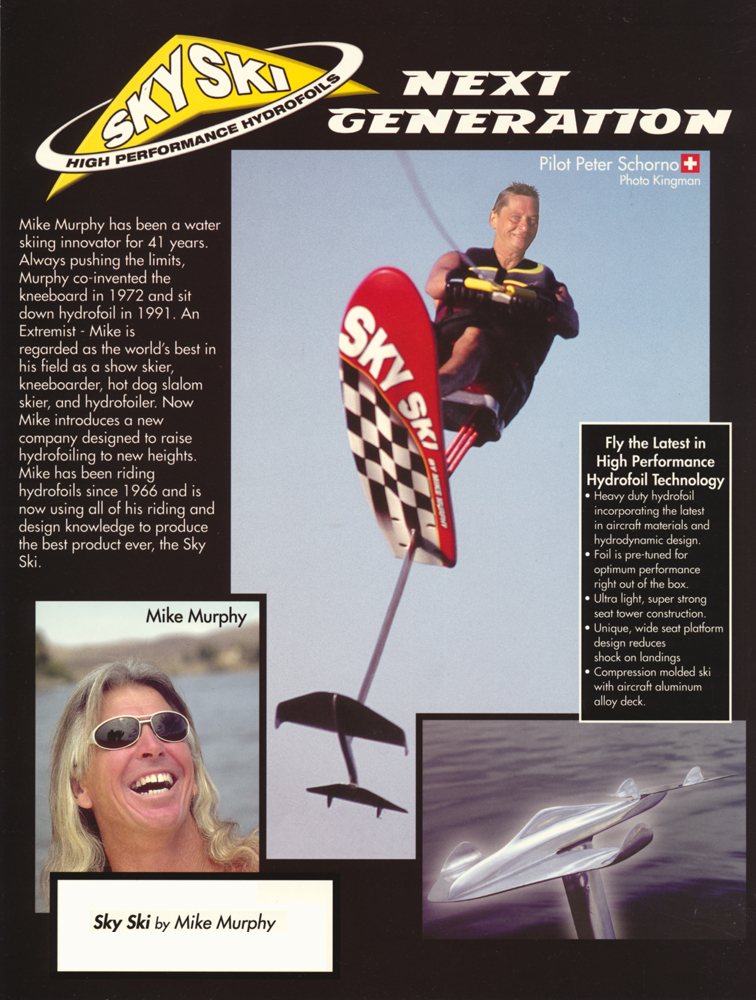