In 1998 I teamed up with Chuck Sacks of California Skier to put on the Flight Worlds of Hydrofoiling. Chuck controlled the Lake Elsinore inlet channel, which was close to home and had calm water. It was another education in planning and organizing a big event, complete with vendors, sponsors, exhibition acts, and insurance coverage. It took an army of volunteers to keep things moving. Ted Rupp played the wise Solomon, our chief Judge. Mike Mack acted as chief boat driver, and Cheryl was in charge of keeping the mountain of paperwork organized. Tommy Phillips came out from Denver just to announce all the action and show his support.

Over 80 competitors from five countries made the trip to compete at the Flight Worlds ′98. It was my personal best as a competitor in the pro division with two first place finishes out of four events, and a third place in Big Air which surprised even me. The Big Air event was hotly disputed, and in the end Mike Murphy rode away from the biggest jump of the day, clearing the 18-foot mark. He was absolutely glowing for weeks after that victory. “Father Time” had triumphed yet again. 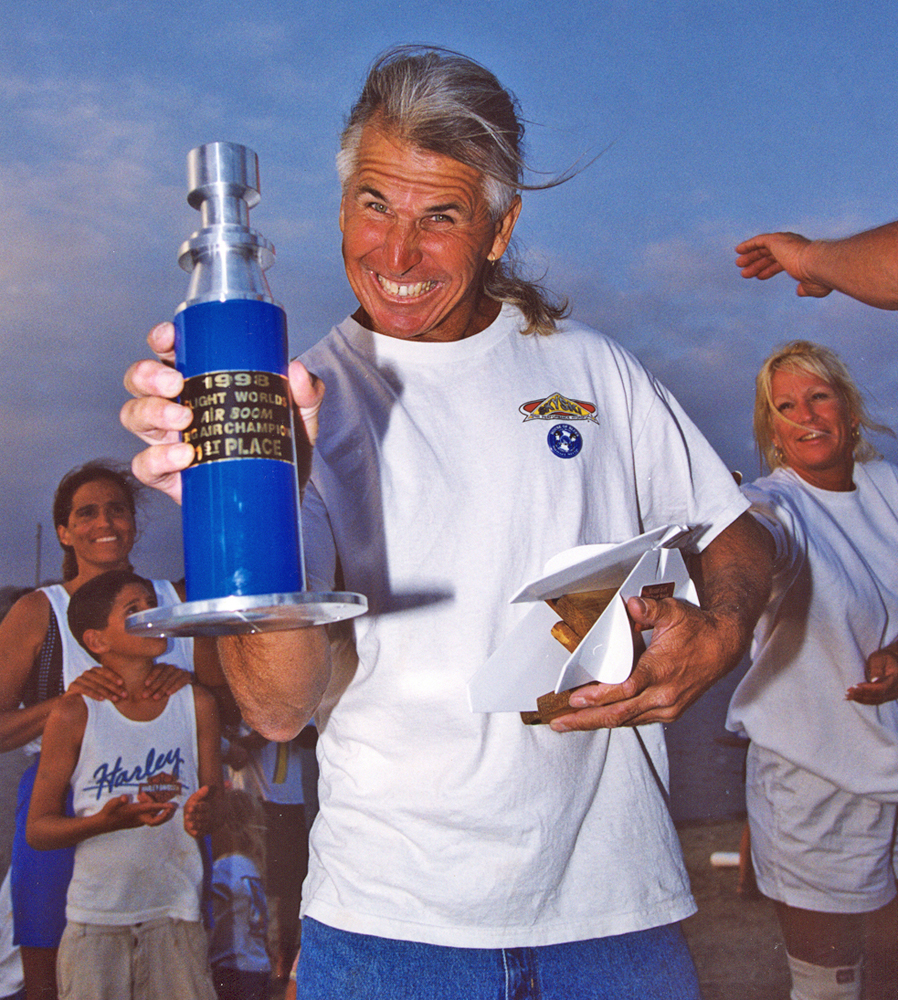 Other notables were Damon Moore who won the pro Free Ride with his clean combos, huge air, and giant laid out front flips. Cheryl Roberts stood out for the women, taking a first place finish while being the first woman to ride away from an invert in competition. 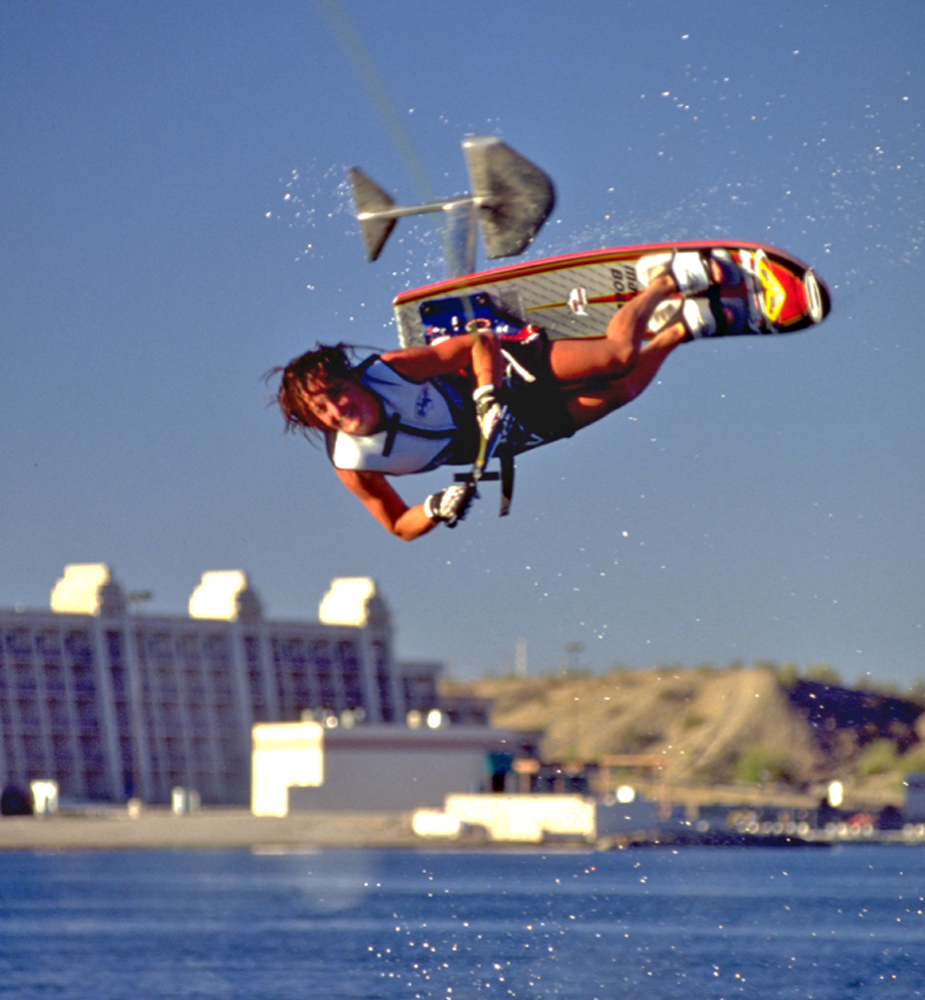 1999 was an off year for the Worlds, but there were plenty of foiling events. I chose to attend the Great Canadian Fly at the request of Ron Young and the Crane Lake Aquaholics. Troy Gratton was our gracious host who opened his home to many participants in including the Air Junky crew and other foil fanatics from around the U.S. and Canada. In addition to the festivities and riding, Nathaniel Ostashewski was filming for an event video and more importantly to me, an upcoming series of instructional videos dedicated to foilers. His “Hydrofoiling (I-IV)” series of videos became the all-time best selling instructional videos for the sport. 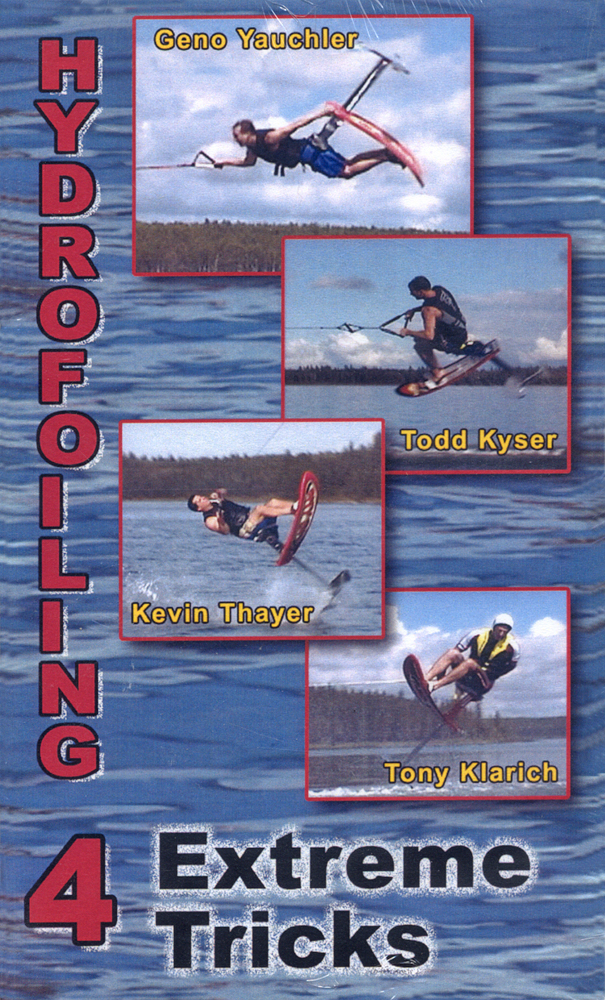 Jon Wilborn was the poster boy of the First Canadian Fly-In; showing off his newly minted “Double D.” He was the first person to complete two revolutions on a foil. It was a double back flip dismount off a kicker wake. I saw Jon crash hard on his move dozens of times, but he was persistent. When he nailed one it looked like it was the kind of trick that any of the top riders could land. But Jon was the lone man doing the Double D for several years. Jon’s style was aggressive, and what he lacked for in years on the water he made up for in a willingness to sacrifice his body to achieve his goals. Whether it was going for big air or learning a new trick just out of his reach, he got good fast by taking his bumps and bruises. The crowd at he Canadian Fly-In knew this, and went wild when he tried the Double D because his big move could result in the thrill of victory of the agony of defeat. 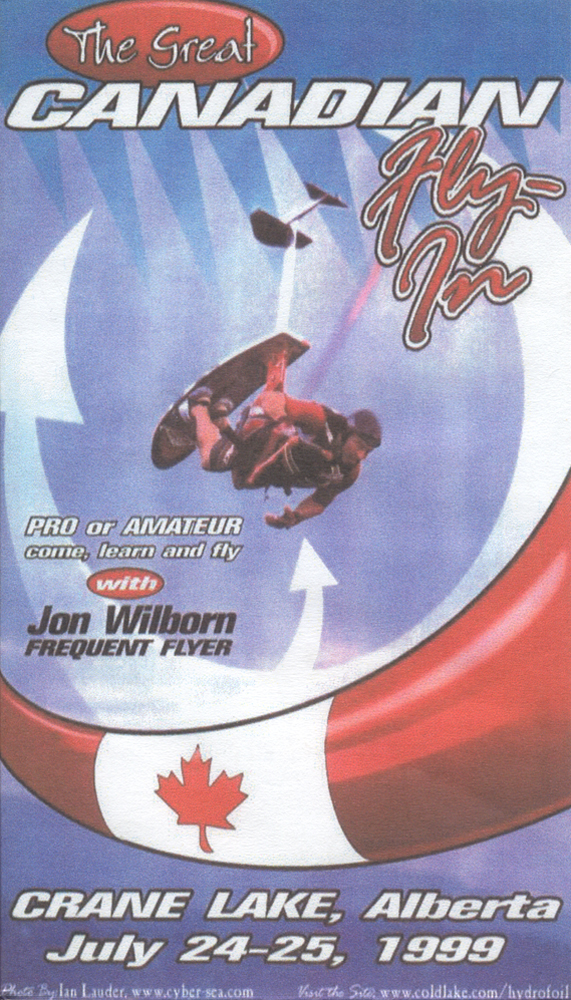 Jon’s wife Teresa and his son Jon, Jr. were in attendance to complete the family picture that often accompanied fly-ins. Jon was also riding high as the co-inventor of the Sky Ski Shock Tower with Bobby Taylor. The Shock Tower allowed the seat to move up and down with a built in bicycle shock; just enough to reduce the impact during landings. Dozens of riders at the event were already using them happily.

I never used the Shock Tower as my regular seat because it was so heavy. I also I felt like I lost a vital connection between my ski and me. It felt like driving with bouncy shock absorbers. The concept was great for most riders, but I was in the thick of developing the new sink style combo moves that required “stiff shocks” for a quick response. The sink style combos were coming on strong, and I had a hard time doing them with a Shock Tower. My workaround solution came from Mike Mack, who was using a kitchen cutting board for the top of his tower. For me it was love at first ride. It actually reduced the overall weight of the entire Sky Ski, and offered just enough spring to help cushion my landings. I used Mack’s set up though 2014, and the basic concept was used by several foil manufacturers.

During the first Great Canadian Fly-In the Crane Lake Aquaholics also rigged up a boat to try and set a new record for towing the most foilers. I watched from the sidelines with amusement as the team set up. The tow bar consisted of an elevated crossbar at least 20 feet wide to help keep riders separated. It worked. A new record was set with 12 riders getting up from a deepwater start. The two chase boats with their giant Canadian and US flags made for a stirring background of a wonderful event.

In the late 1990s it was getting harder and harder for me to stay on top. I added a triple gainer combo dismount and wake wrapped helicopter to the rapidly expanding tricks list. Jake Kinnison came out with a gainer around the boat. Geno Yauchler and Damon Moore were battling it out with combos, tied at ten consecutive back rolls each. I still had considerably more major tricks than anyone, but other riders were taking them a lot bigger. The big air that defined Damon Moore’s riding went a long way to help him be named alongside me as one of the two top hydrofoilers in 1999 by Water Ski Magazine. [i] 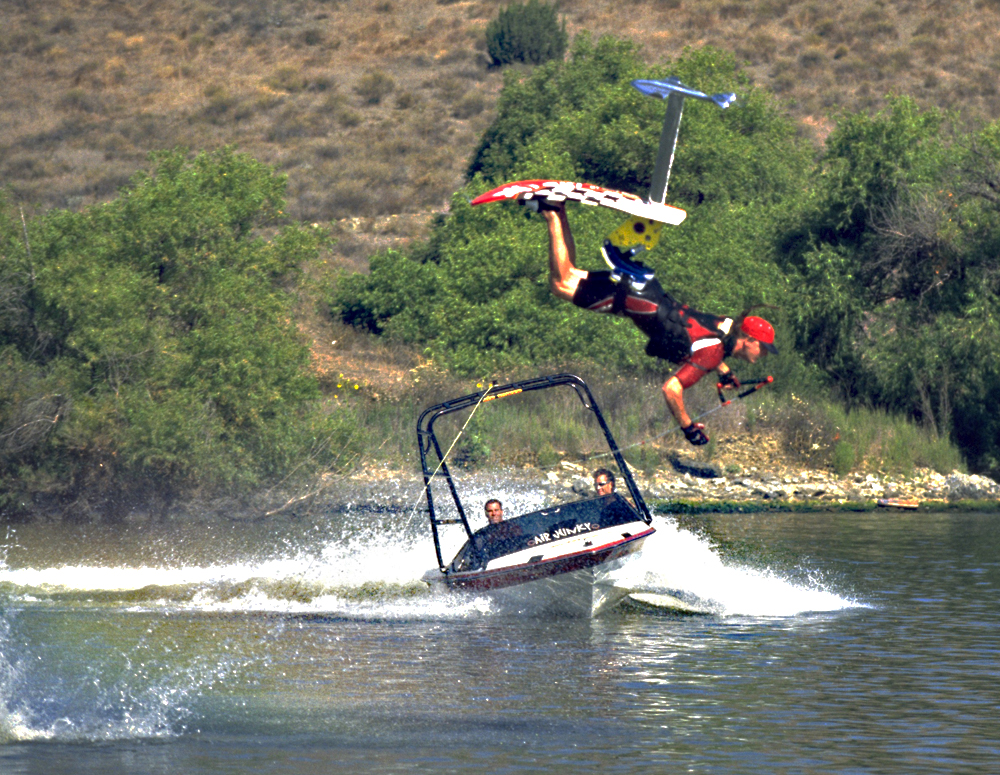 The boat goes one way, Jake goes the other…all the way around the boat! (Kingman, 1999)

Uncle Mike has always been an idea guy, and it seems as if he always has a few new products or concepts in various forms of development. 1999 marked the introduction of one of his best ideas ever. His new product was debuted in the “Calabria Signature Series Boat by Mike Murphy.” Mike’s signature boat had a few bells and whistles for hydrofoilers, including a notched swimstep to get into a foil without getting wet. But the big new innovation was his PureVert wake system. The name was genius on at least two levels and the wake enhancement system was even better. Previous systems required the use of pumps, bags, and various other devices. Mike’s ballast tanks were located in the floorboards below the water line so that no pumps were required. The whole thing filled up in less than three minutes by pulling two gate valves at the back of the boat. The patented system has since been licensed to several other manufacturers including MasterCraft, MB Sports, and others. But the end product of an easy to use wake system started out in our garage in Canyon Lake. Mike bolted on a pair of hydrofoils to the back of his personal boat to suck down the back of the boat, and enhance the wake. The system worked well enough, but required too much fine-tuning, so he abandoned using foils. The concept was eventually used by Malibu Boats as the Wedge System. 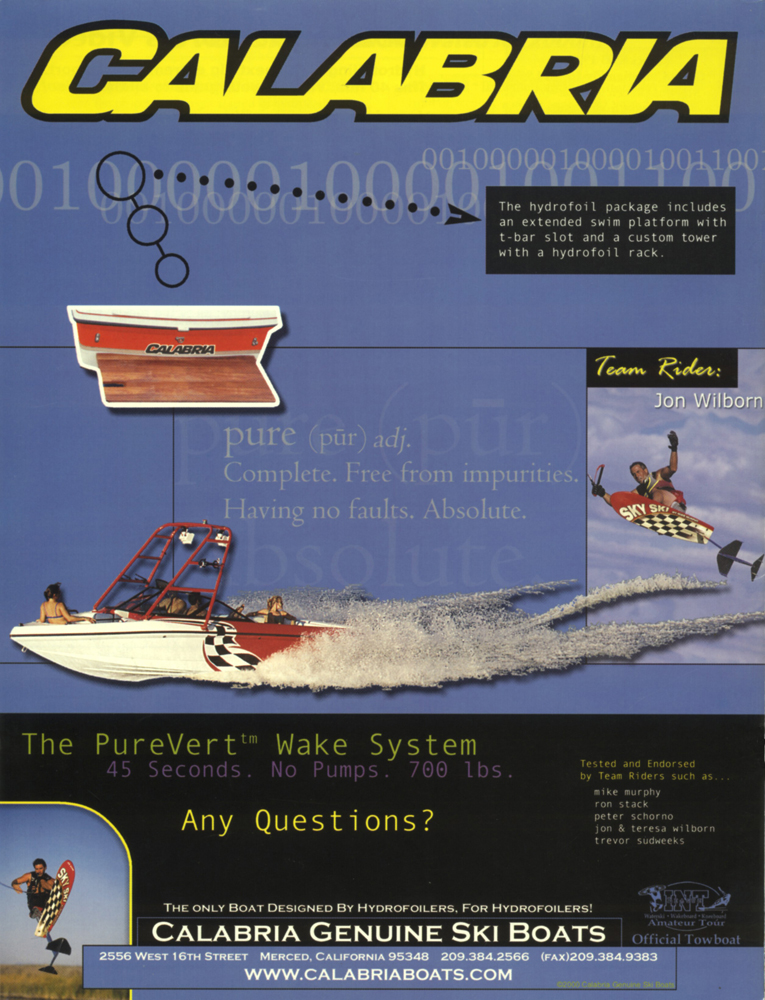 Mike’s PureVert Wake System was revolutionary in the boating industry. (2000)

Through the years Mike has been developing new concepts like the wake kite (his failed because it used an additional rope between the kite and boat), the T-bar handle, and many more. He already holds more than a dozen patents for various watersports products.

As ingenious as Mike could be, he could be just as gross. He brought his boat to Cypress Gardens in 1999 to help me train for the 1999 World’s Greatest Skier Contest. It was an invitational competition consisting of numerous events, and hydrofoiling was one of them, which I’ll get to in a later chapter. The moment of grossness occurred when Mike and I were sitting across from one another on the gunnels of his boat. Mike was a big fan of pulling his pants down and farting, and that day was no exception. He aimed his “chicken eye” my way and let one rip. A tiny piece of something ejected from his butt, flew across the boat, and landed on my arm. I looked down in disbelief. I calmly showed the dirty evidence to the culprit who laughed hysterically as I rolled myself over the edge of the boat and into the water.