Mike, Ron Stack, and I dominated the early days of inventing new moves on the foil. We came up with nearly all of the first 100 tricks that would be considered the standard moves in the sport.

The overall level of riding skyrocketed again around the turn of the century, and different styles of riding started to emerge. Some riders went for the big air while others focused on combos or inverts. I chose a style that centered on smooth controlled riding that I would be able to keep up for years to come.

Another style of riding that got a lot of attention was adding cheese. Being cheesy was going out and doing something new, even if was as small as adding a one hander to a jump. A plain old wake jump became a fashion air. Grabbing the tower during an invert made you a cheese whiz! The individual tricks were often considered silly or stupid, but gathering up enough cheesy bits often opened up pathways to cool looking “real” tricks.

Ron Stack was the undisputed big cheese. He had grabs galore and tweaks aplenty. It only took a few seconds of watching him ride to see he had a style all his own. His inverts list was relatively low, and at only 22 mph it was never about big air, but any fan of foiling would always take notice when Ron was riding.

Ron’s 1995 signature move was the “Floater.”[i] He got the idea from a motocross move called the “No Hander.” Freestyle motocross (FMX) was an early influence on foiling, and the godfather of the sport, Mike Metzger, used a training facility within site of Murphy’s house in Canyon Lake. We were in the midst of the revolution of FMX as Brian Deegon, the leader of the Metal Mulisha, also lived in Canyon Lake at the time.

Ron started his Floater with a cut into the flats for a jump. In mid air he let go of the handle completely, and floated it in mid air for a couple of seconds before recovering the handle and riding away. He soon figured out that a little tug on the handle during the takeoff would advance him on the rope, and allow for a longer handle float.

The Floater was a real breakthrough. We had never seen anyone in towed watersports do anything like it. But Ron never settled with just the basic move – roll in the giant wheel of cheese! Ron put both hands behind his head during a jump and reclined while the handle floated. He called it the “Lazy Boy.” The Stack master invented even more handle tricks including the “Typewriter” and “Spinner.” 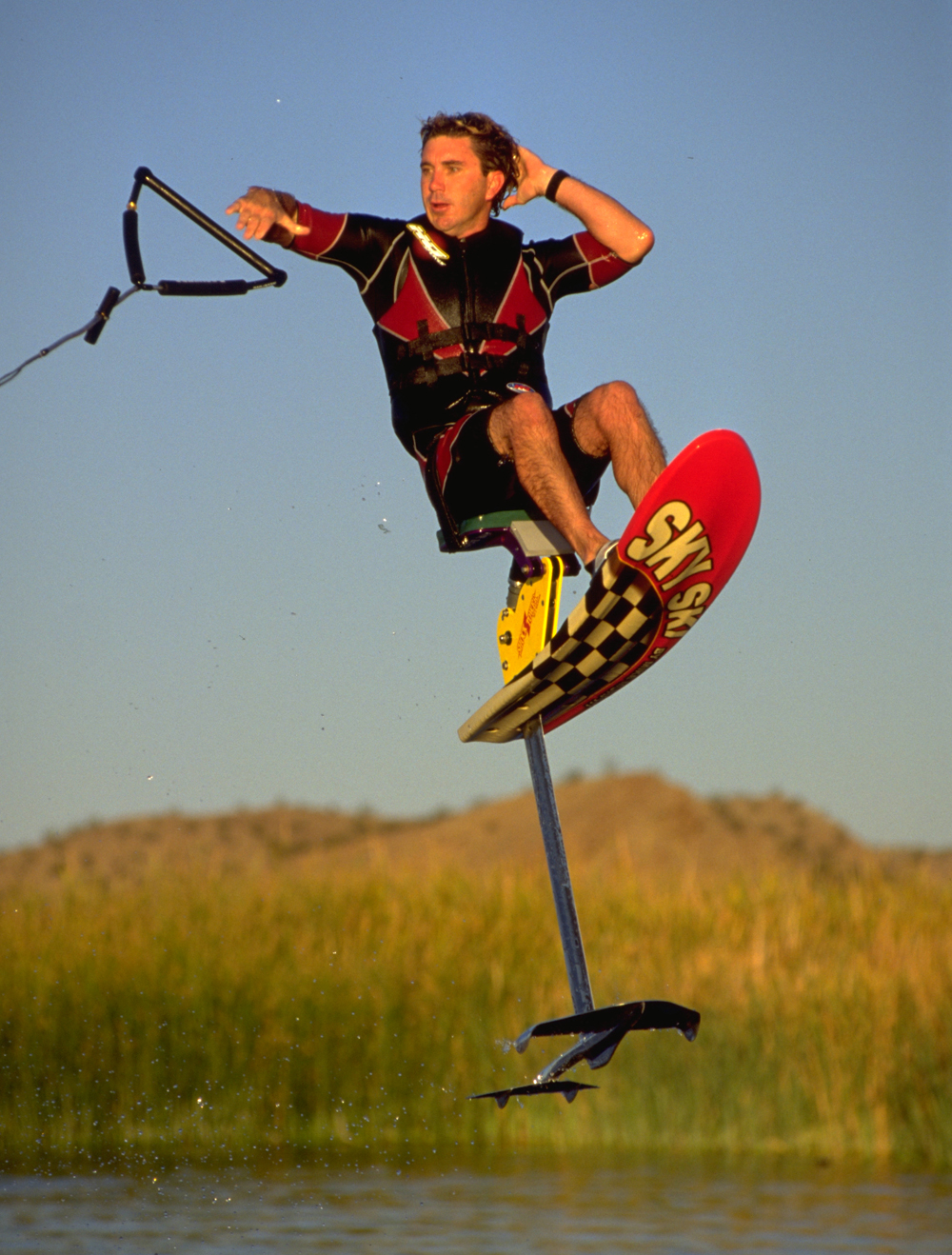 Ron “AirBoom” Stack reaching for the handle after a Lazy Boy (Lauder, 1999)

Ron and I were training partners in cheese. We challenged each other to be the cheesiest rider of the day. One time I went out, jumped and tried to wrap and unwrap the rope in mid air. Ron wondered why have the recovery at all and on his next turn simply jumped up, pulled in the rope and landed in the wrapped position. The “Air Wrap” was born. Not a breathtaking trick in itself, but when we used it as a set up for wrapped tricks it added a nice touch.

Ron’s cheesy moves almost always included adding a grab to an existing trick. His initial inspiration came from the grabs and tweaks of wakeboarding. He mastered the nose grab, Cross Rocket, and Stiffy. The best example of a cool looking trick that came out of adding a simple grab was his “Method Floater.” Ron jumped, then reached forward to grab the rail by his feet as he floated the handle. That trick has to be classified as one of Ron’s signature moves, and a hydrofoiling classic. 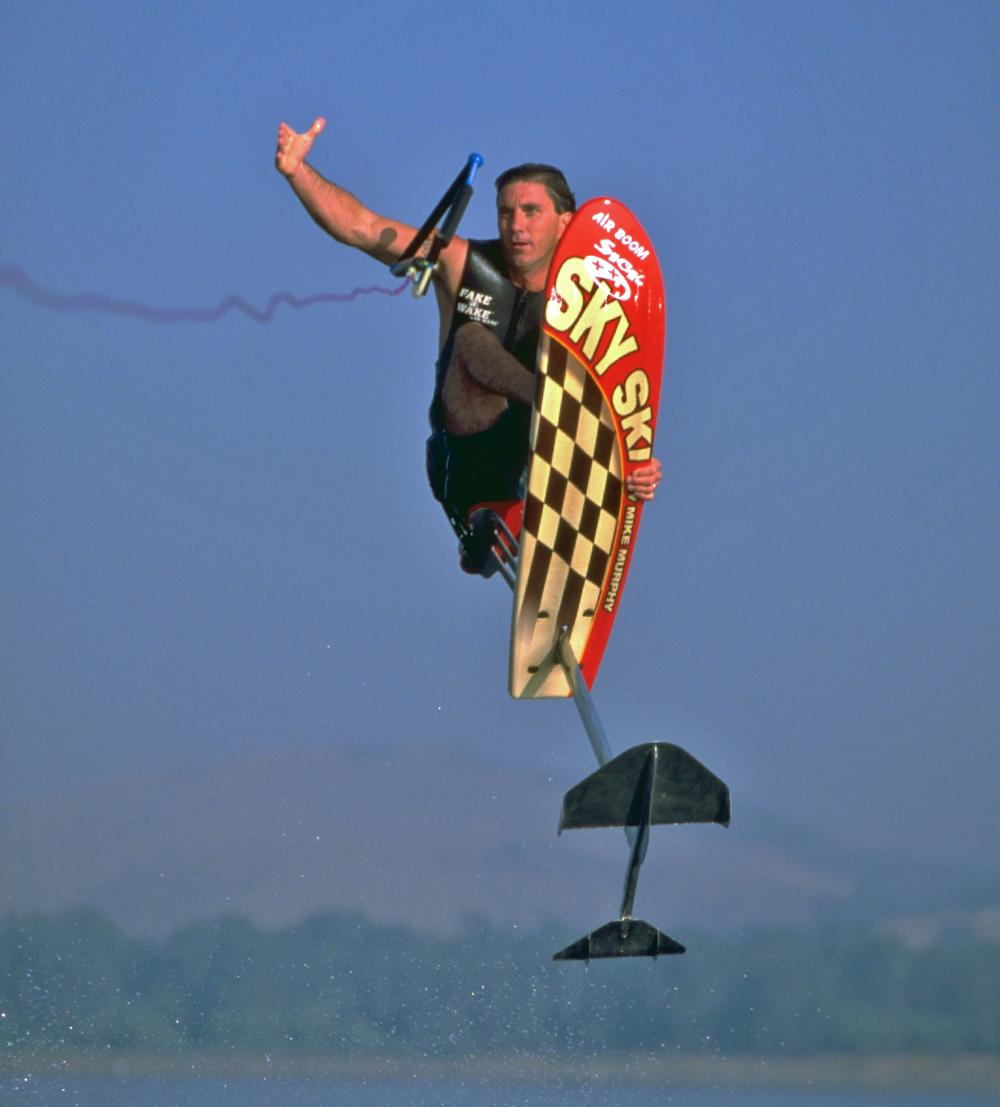 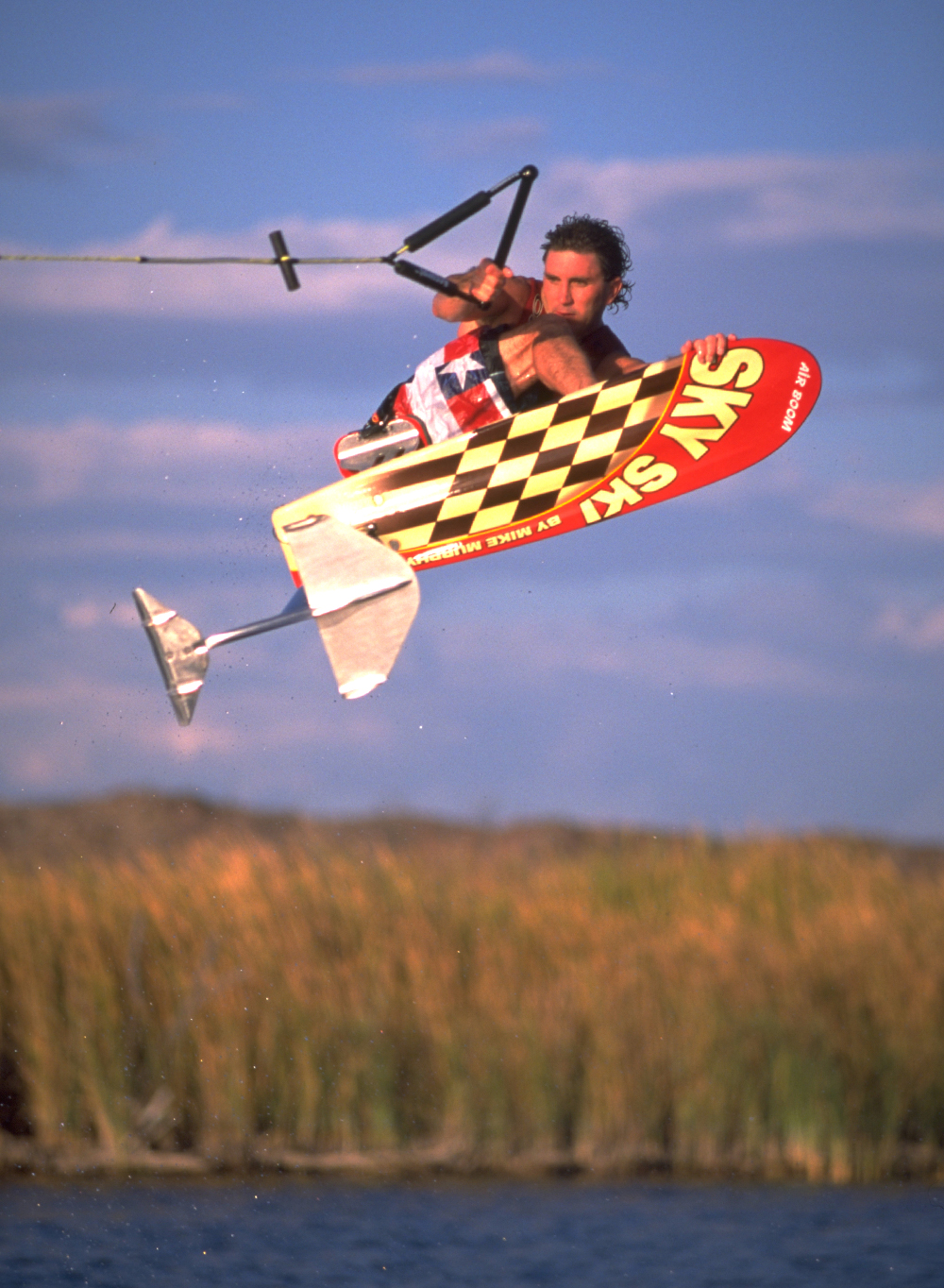 A Cross Rocket Stiffy from Ron Stack, the pioneer of foiling grabs and tweaks. (Kingman, 1999)

I’m not that limber, so the only one of Ron’s grabs I was able to do was a tail grab. But I still liked the concept and feel of the grab, so I started grabbing various parts of the tower during my inverts. My favorite was to grab the “Y” shaped part of the tower during a wake frontside roll. I chose a name for the new grab that uncle Mike could really appreciate: the “Reach Around”. When I grabbed the tower it tweaked the trick enough to give it a unique look, and it sure felt a lot different to perform. Other riders followed grabbing all parts of the tower, board, and even strut during their tricks. 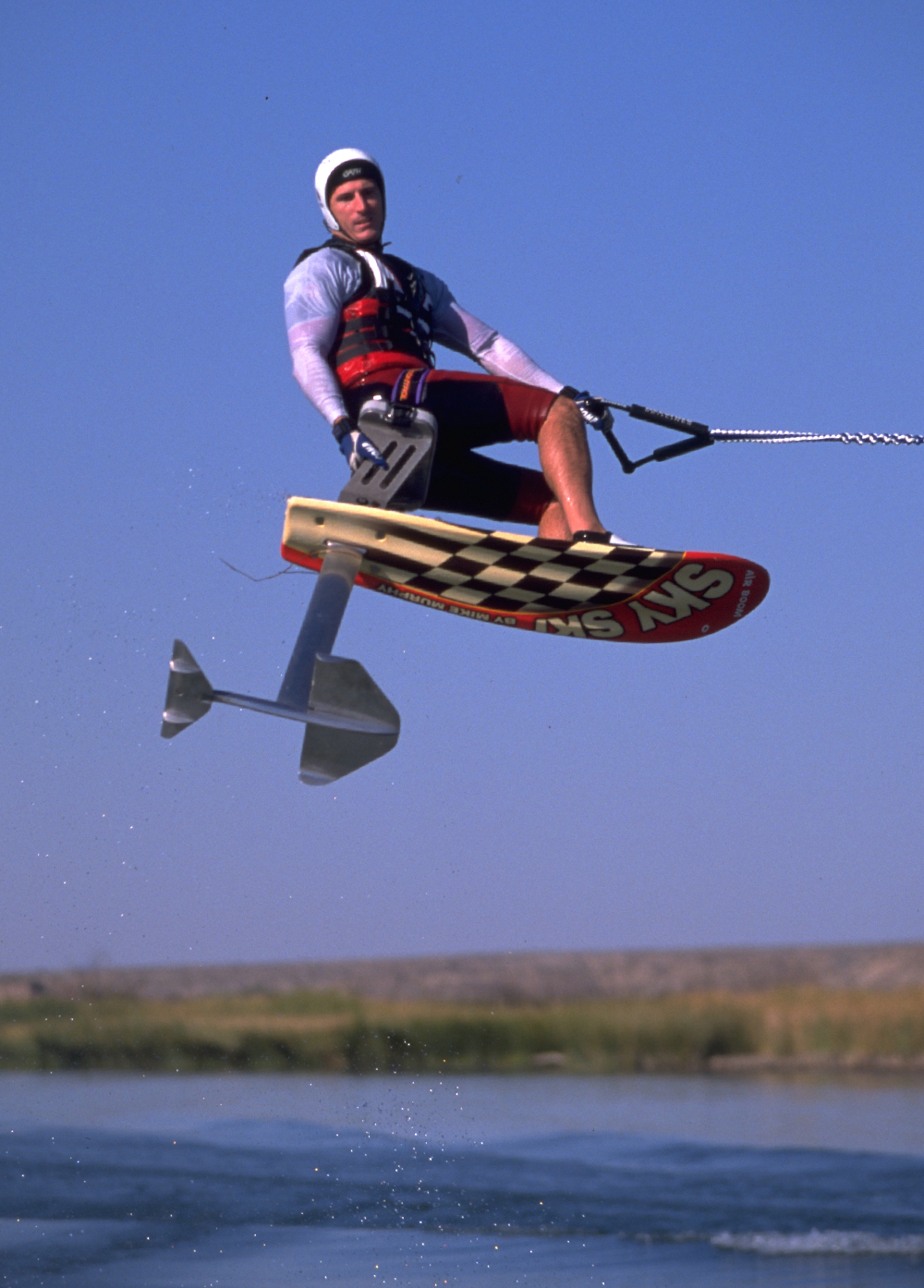 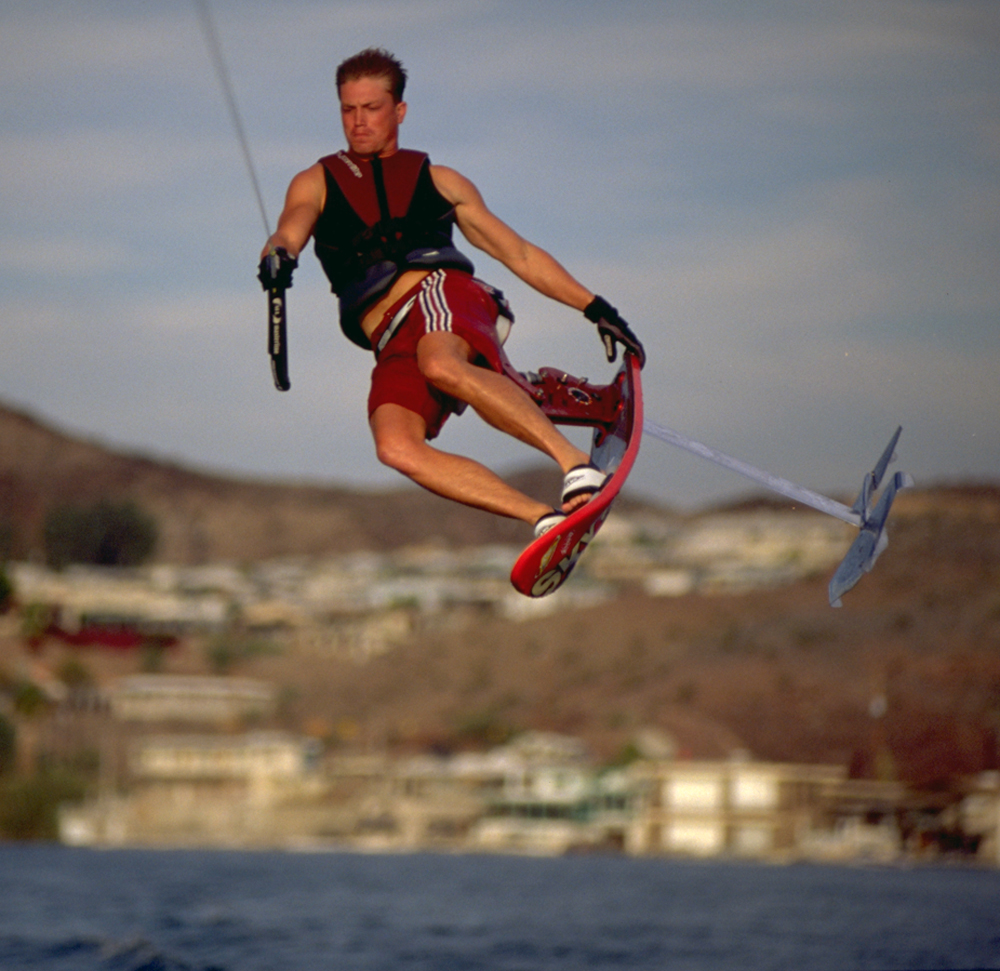 On another ride Ron’s super cheesy new move inspired me to a new “real” trick. He cut out in the flats, reached under his legs and grabbed the handle Undertaker style. It wasn’t a jump or anything; we already did the Undertaker during a jump. It was just a new way to grab the handle while riding. He was in the exact spot where I threw my gainers, and I instantly knew I could use his cheese as a Gouda set up for an “Undertaker Gainer.” Sure enough, after just a few tries I completed the move, ending up being completely inverted while I held the rope with my arms under my legs. 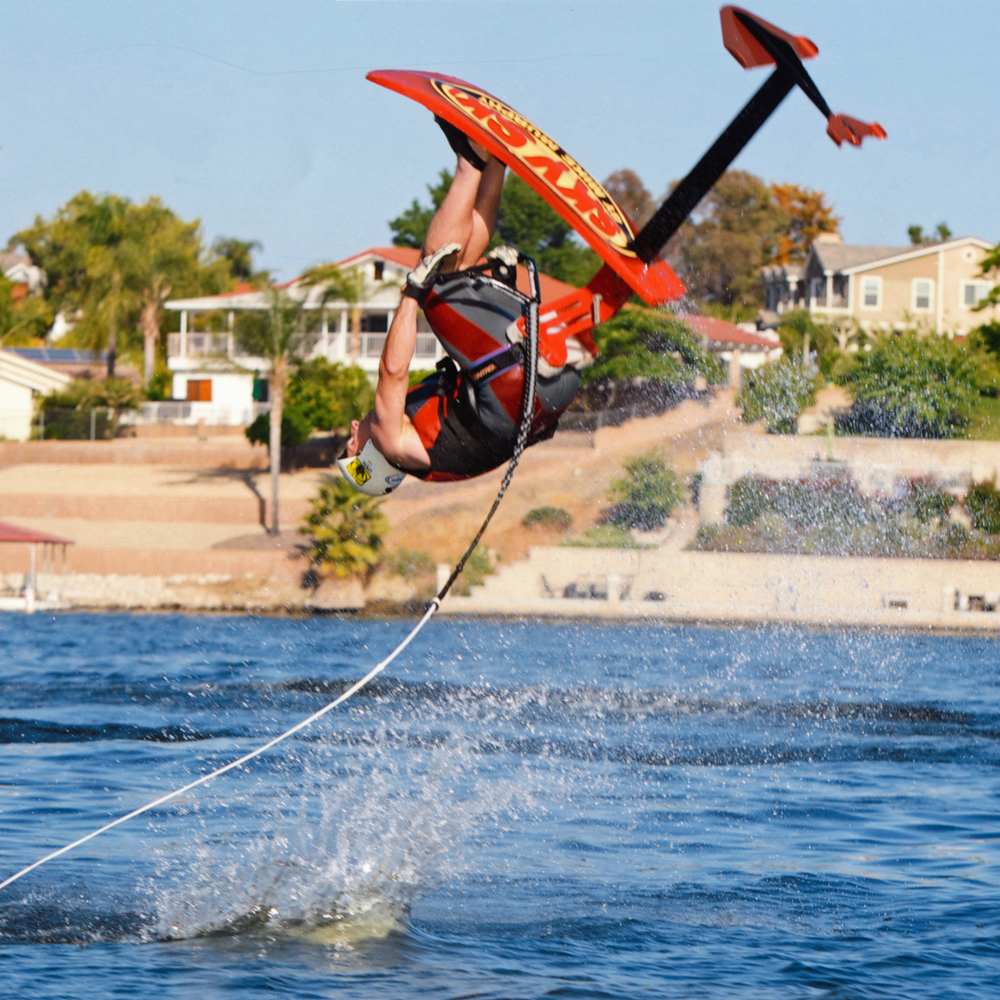 Other moves we came up with from such sessions included Ron’s “Cordoba”; another motocross inspired move involving laying back completely flat during a jump. I used an old wakeboarding move to pull a “Judo Gainer” kicking one leg martial arts style in the midst of a gainer. Ron took Judo Air a step further with his “Nothing”; a floater with both feet kicked out to the side. We ended often ended our runs Skateboard style by “pushing” of the water with one leg repeatedly after letting go of the rope. I don’t know why but that one always made us laugh. 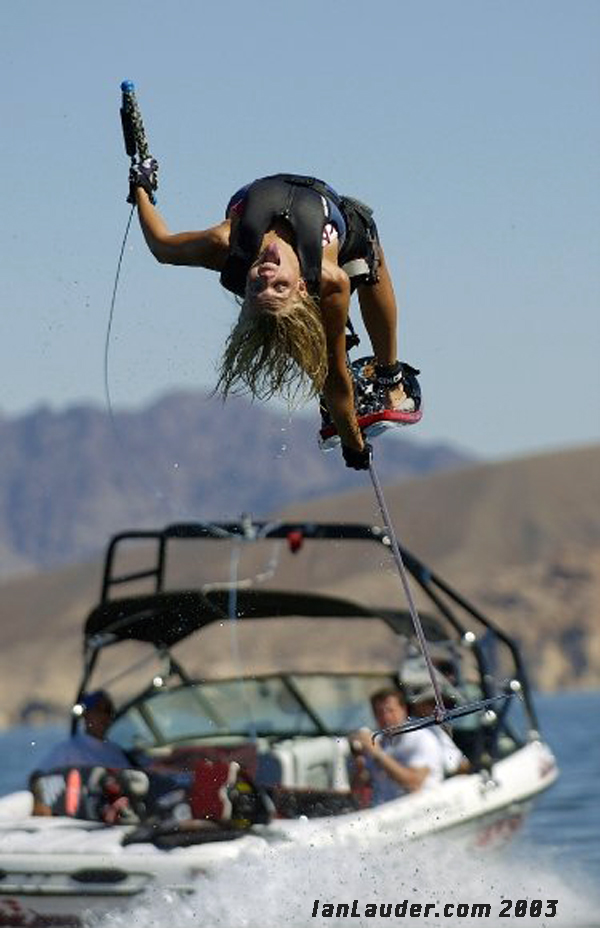 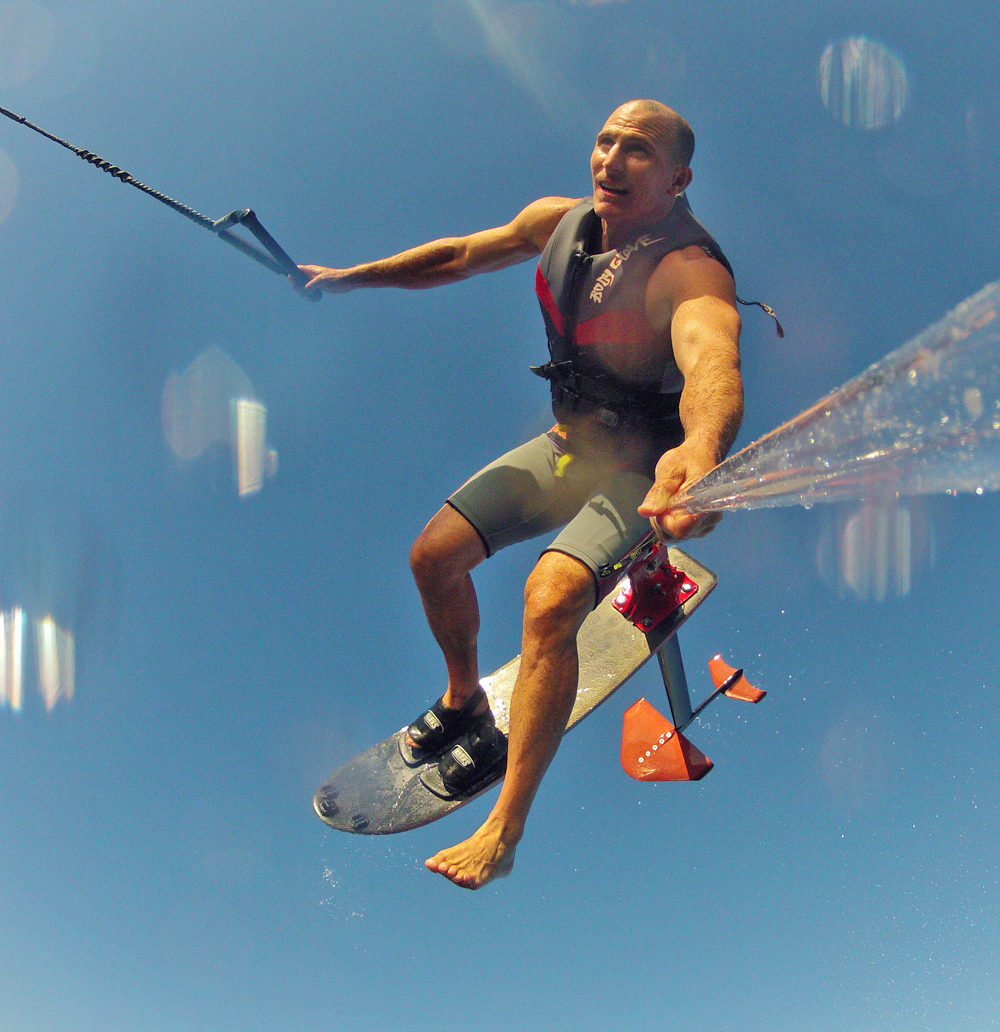 We all have Mike Murphy to thank as the originator of goofy moves like his “Flying Chicken with Sound Effects.” I once saw him perform this move at an event attended by George Bush. As Mike flew by the raised viewing platform with the VIPs in attendance he threw the move, flapped his arms, and added the sound effects – an all time classic!

>Next: Trippin’ with Schorno