EASY TO LOVE: The Florida Pool at Cypress Gardens. A Journey Through Time with Dick Pope and Esther Williams

Located at the center of the Water Skiing Capital of the World, the Florida Pool on the shores of Lake Eloise inside the Legoland Park is an aging icon, with a deep history tied directly to the heyday of Cypress Gardens. We honor this landmark not just with the words and images from this post, but our very real plans to bring back a fun-sized replica of the Florida Pool for our guests to enjoy on the grounds of our Cypress Gardens Lake House!

Mention the Florida Pool to local water skiers of a certain age, and their eyes widen, filling with fond memories that transport them back to good times filled with late night shenanigans, fantastical photo shoots, and the time MGM studios came to film a major motion picture at Cypress Gardens. 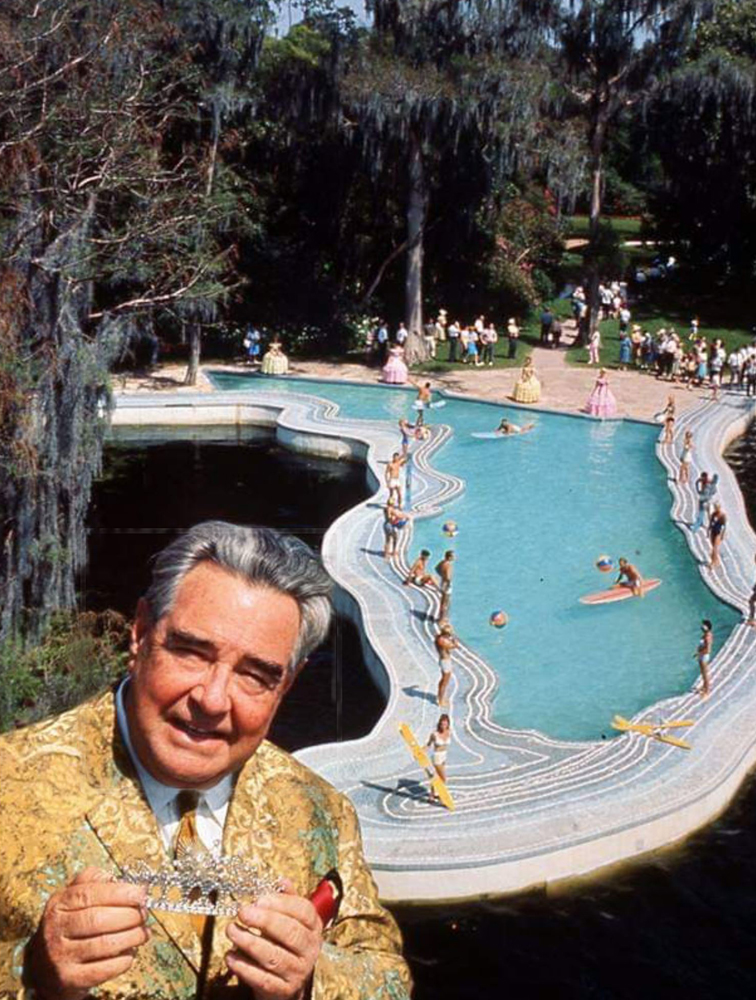 “Mr Florida,” Dick Pope in Front of His Florida Pool at Cypress Gardens

>Based on a sized-up drawing from a roadmap

>Site of dozens of Dick Pope promotions for Cypress Gardens, the local citrus industry, and Florida itself (One of Pope’s nicknames was “Mr. Florida”)

In 1952 Dick Pope landed one of his largest promotional deals; convincing a major film studio to shoot a motion picture at Cypress Gardens. “Easy to Love” was loosely based on Dick Pope’s life as described by author Lu Vickers: “the Dick Pope character is so driven to publicize the Gardens and its ski shows that he never notices the Aqua Maid played by Esther Williams is in love with him.” 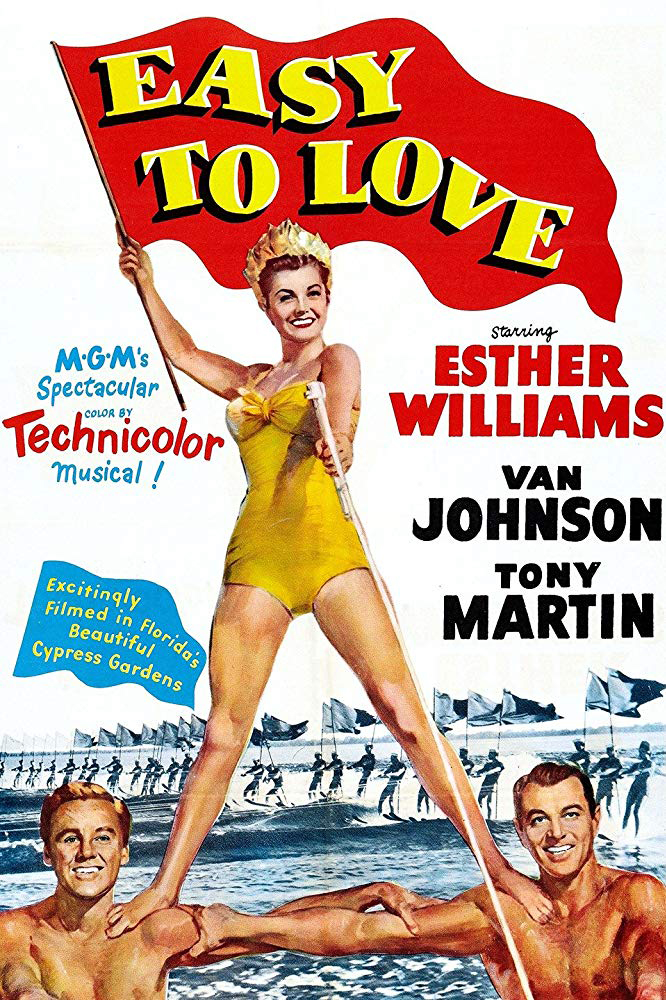 Upon confirmation of Esther Williams as the leading lady, the real Mr. Pope decided to build the Florida pool specifically for her. Williams was one of the most famous swimmers in the world, now a major star for MGM studios. An MGM studio engineer suggested the pool be built as a peninsula extending in to the water of Lake Eloise, to decrease costs and increase visibility during filming. 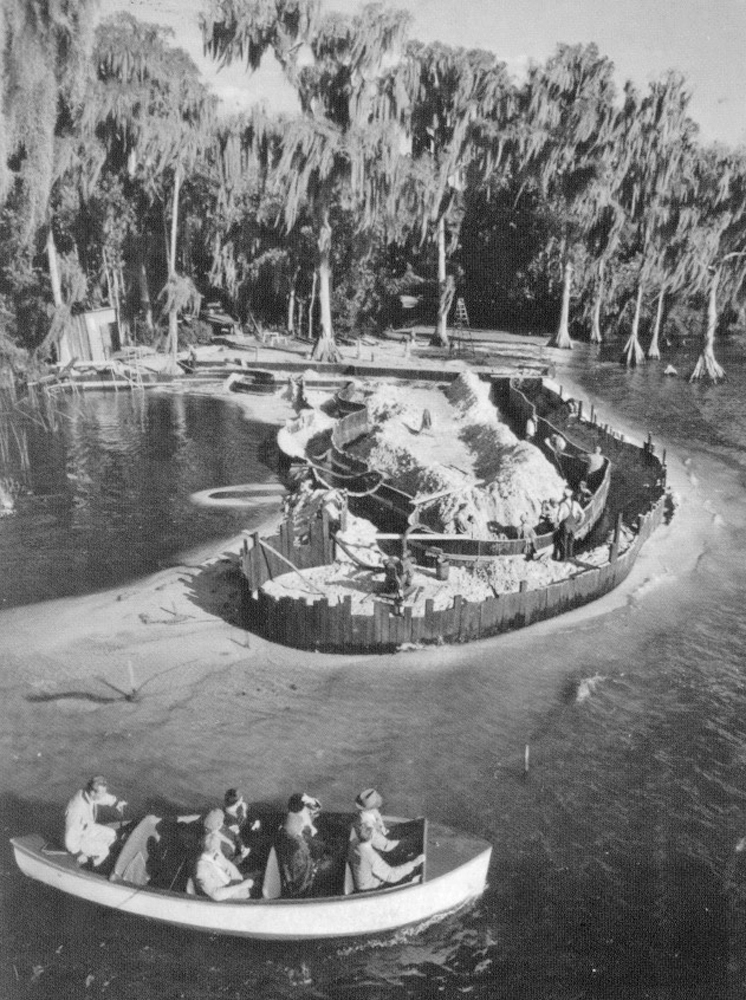 >Learned to water ski at Cypress Gardens for “Easy to Love”

>2007 Inductee of the International Swimming Hall of Fame

Of the 30+ movies that Williams appeared in, “Million Dollar Mermaid” was her favorite. It tells the story of Annette Kellerman, one of the first women to wear a one-piece bathing suit and who also helped popularize synchronized swimming. It’s a fun film, check it out.

The choreographer for the lavish water scenes in “Million Dollar Mermaid” was Busby Berkeley, known for his Hollywood scenes featuring scores of showgirls dancing and singing in geometric patterns. Busby set his performers in fantasy backgrounds; featuring over the top sets and outrageous props.

After the success of “Million Dollar Mermaid,” MGM went back to the well again, pairing Esther Williams with Busby Berkeley for yet another water themed fantasy. This time it was to be set at America’s Tropical Paradise, AKA Cypress Gardens. The Gardens were known worldwide, in large part to Dick Pope’s ever-present promotions of beautiful young men and women, often in bathing suits. 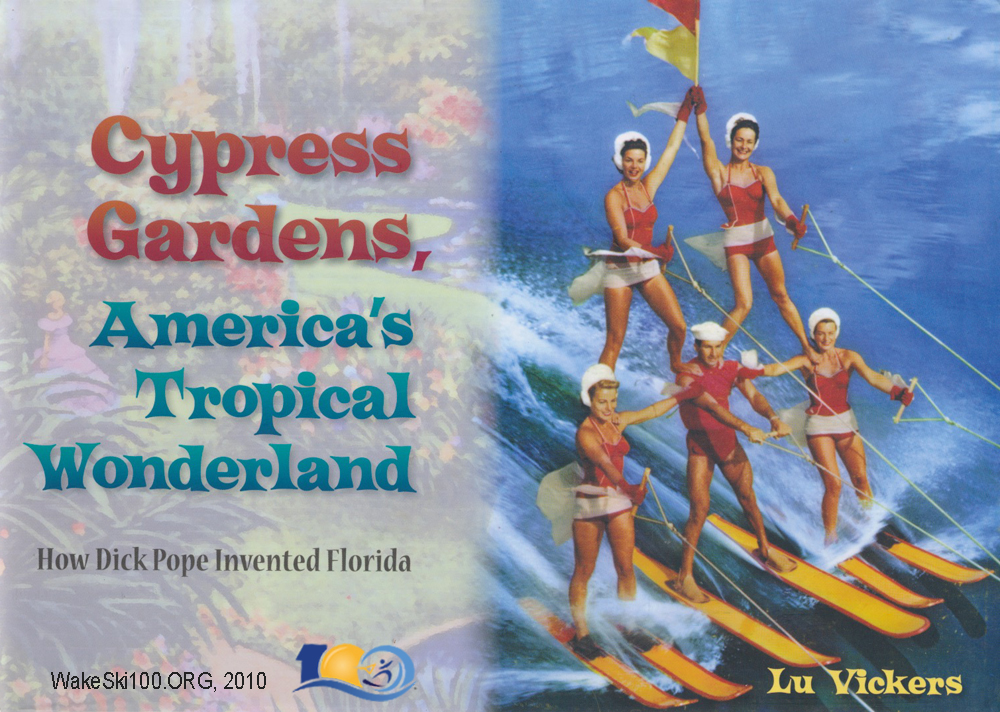 Dick Pope was born to host Hollywood. As a filmmaker Pope had already honed his skills on scores of newsreels and promotional films for the Gardens. Parts of another feature film, “On an Island with You,” also starring Esther Williams, was shot at the Gardens in 1948. The Gardens themselves had been designed with an eye toward photography, and Pope developed themed areas specifically with filming in mind. Director Joe Pasternak was already a fan of Cypress Gardens, already having produced “On an Island with You” there and periodically stopping by to check out the “girls” and visit his “good friend Dick Pope who runs that fabulous tourist establishment.” 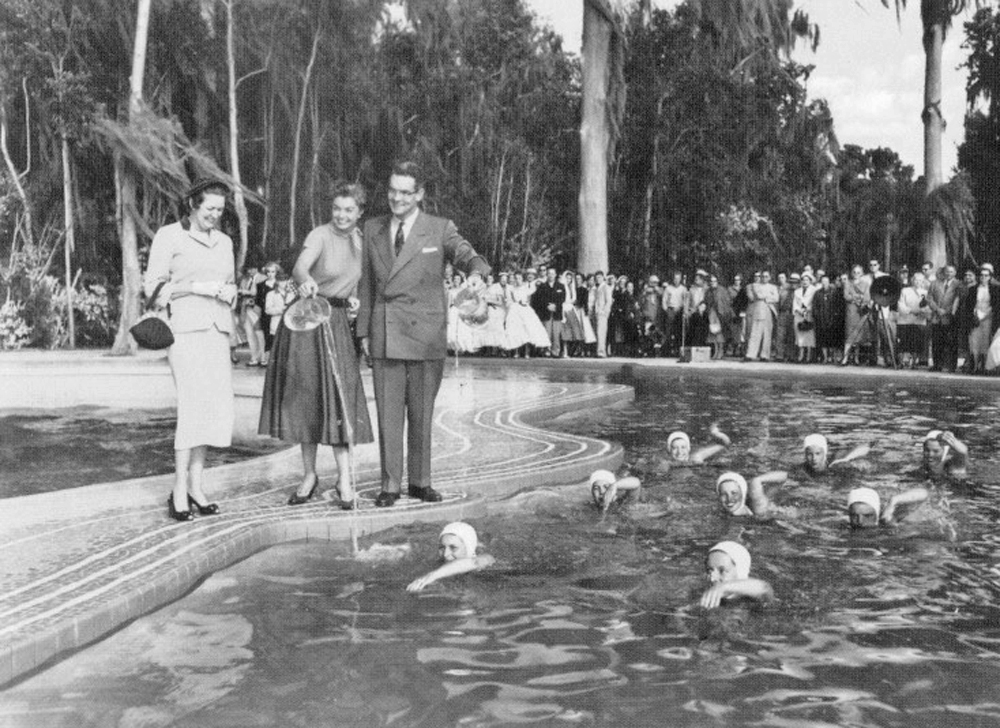 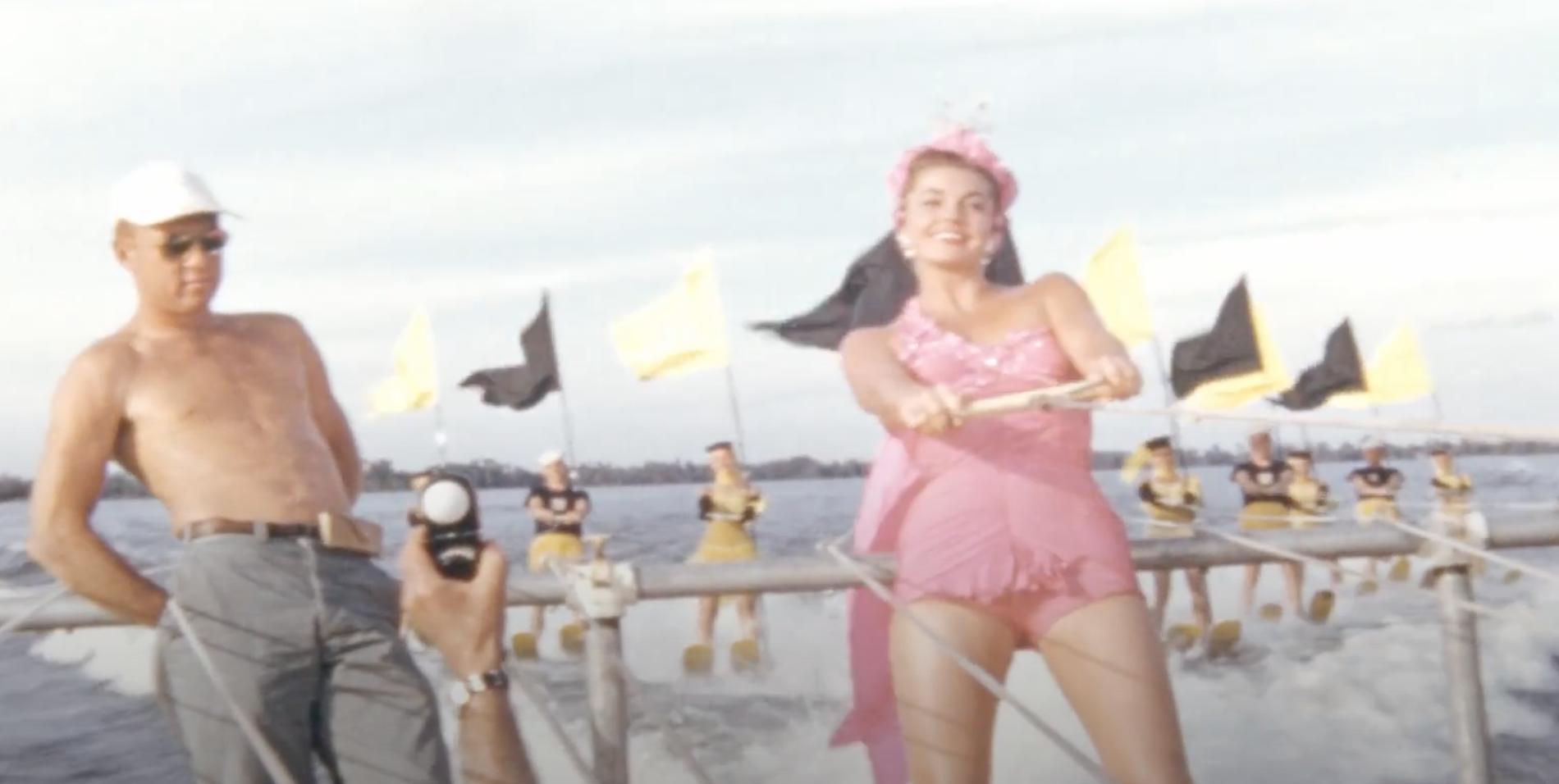 VIDEO: Behind the Scenes Practice Footage Easy to Love

VIDEO: “Easy to Love” Swimming Through flowers in the Florida Pool

In the years following “Easy to Love” Dick Pope Sr continued to use the Florida Pool for ongoing promotions. One of his favorite tricks was to fill the pool up with the local citrus fruits and add bathing beauties. 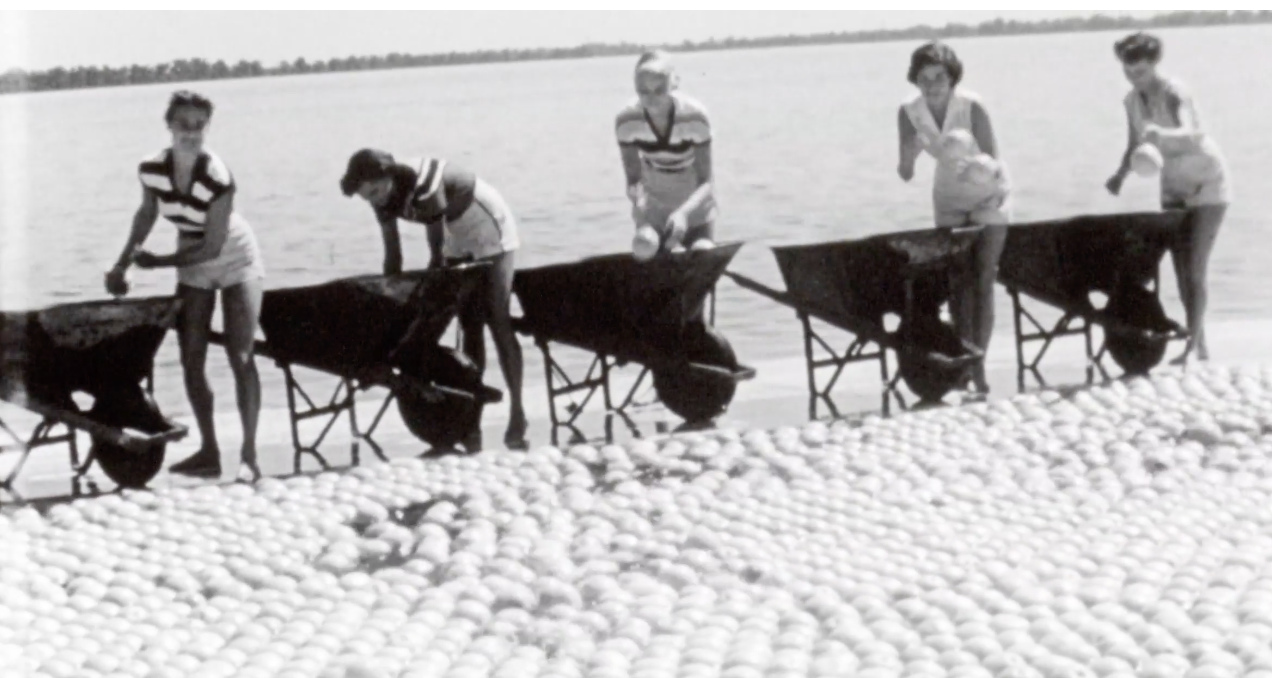 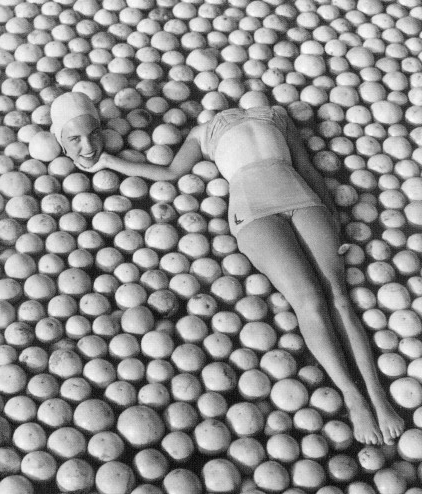 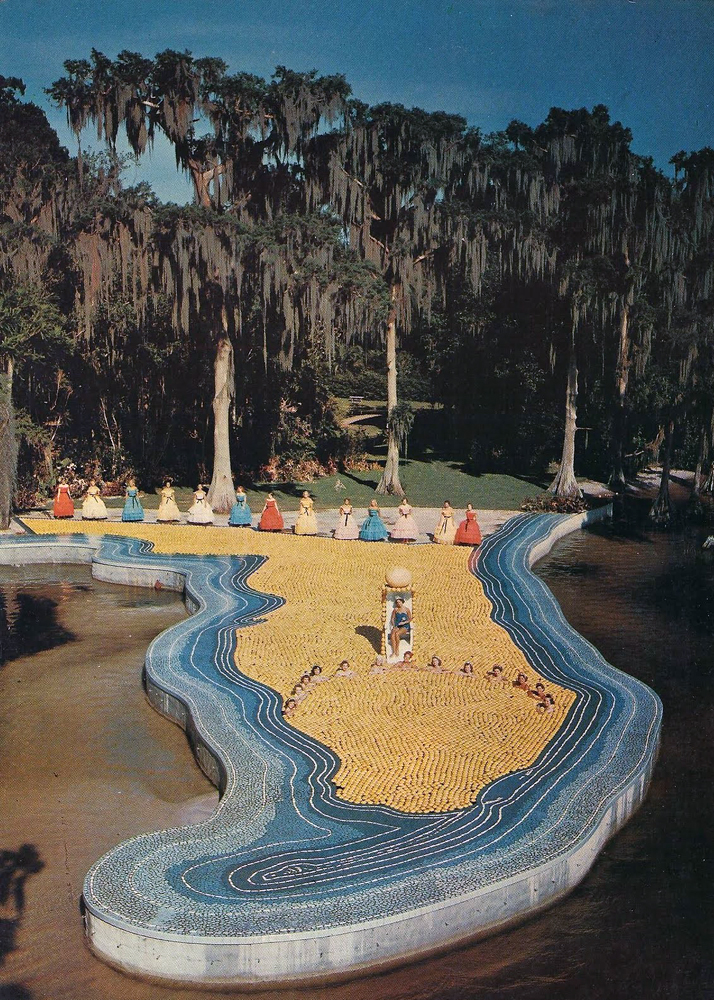 The Grapefruit Queen and Her Court 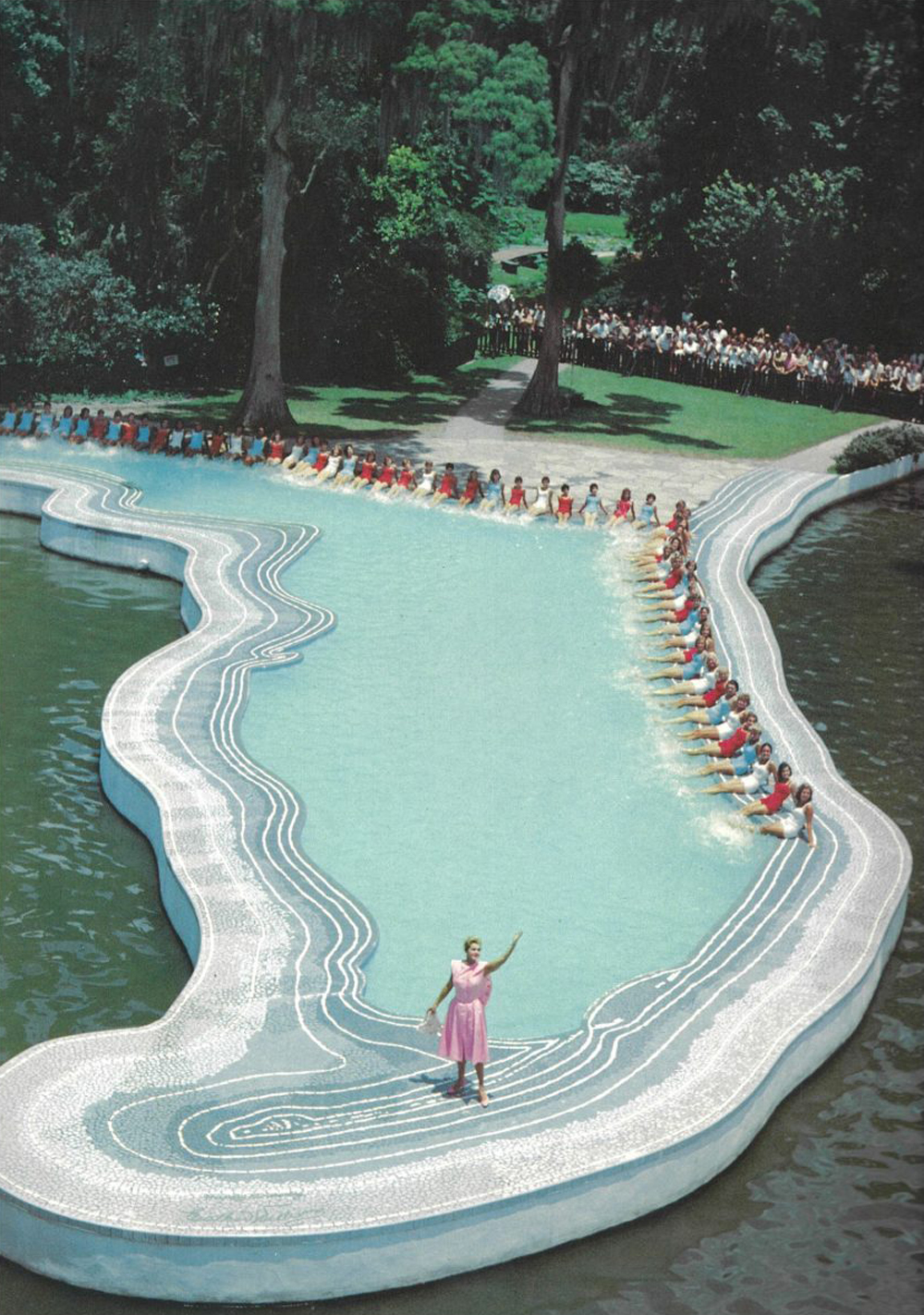 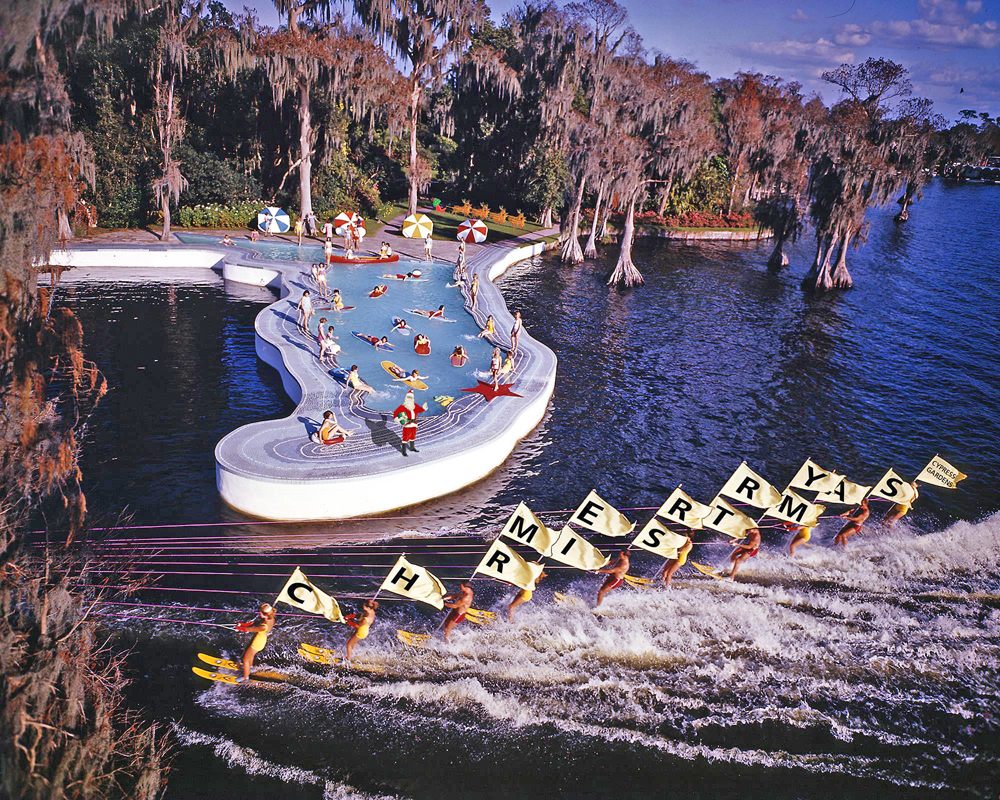 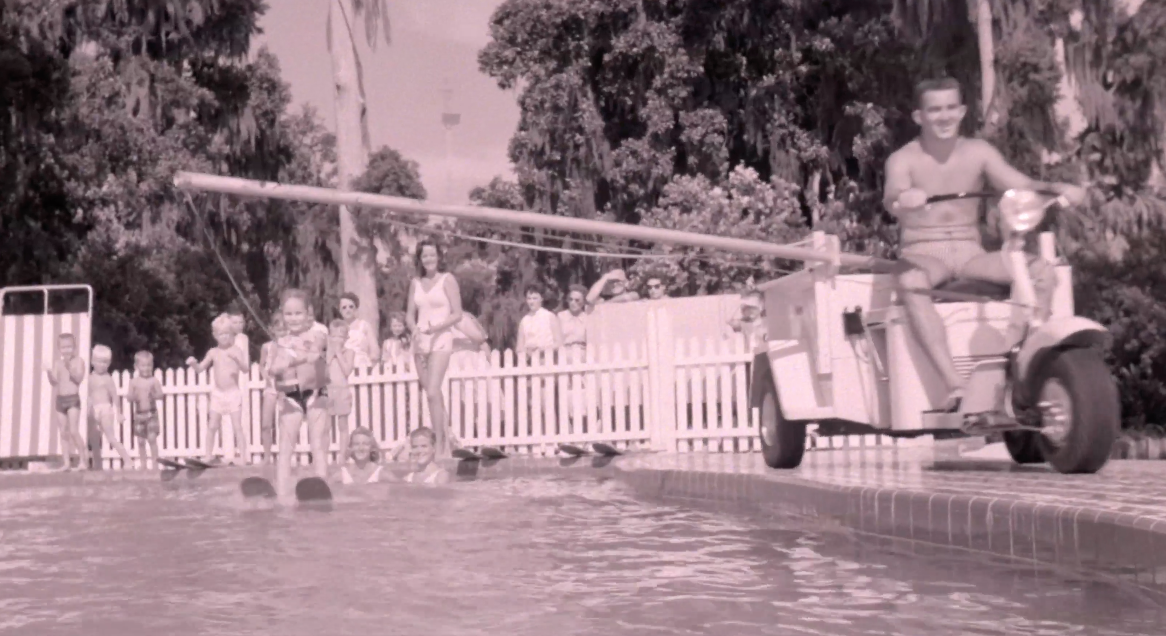 Jerry Imber, long time Gardens photographer, recounted the time Pope turned the Florida Pool into the “World’s Largest Washing Machine.” Pope set up 6x 20 horsepower outboards on the edge of the pool to act as an agitator, and added 100 sheets. I would love to  find an image of this. I am sure they are out there somewhere!

In 2004, as part of a deal with local government, Legoland restored the Florida Pool and reopened the Oriental Gardens section of Old Cypress Gardens for Legoland guests. They kept it nice for a few years but has since fallen on hard times again.

Parks Bonifay set the record as the Guinness Record for the World’s Youngest Skier at Cypress Gardens in 1982. He was 6 months old. Both his parents, Pete and Betty were long time Gardens performers. The Bonifay family is steeped in the tradition of Cypress Gardens, and Parks’ video by Red Bull welcoming him in to the Water Ski Hall of Fame in 2019, reflects that passion. It’s a barefoot journey across the Polk County Chain of Lakes and wild rides through its connecting canals. There is an overhead Florida Pool shot at :08.

Barefoot shredding to the Hall of Fame.👏@Parxxx

The legend of the Florida Pool lives on in the minds of many, and hopefully a few more people will learn of the “cultural significance” of this magnificent structure. It’s been nearly 70 years since the original Florida Pool was built just across from our Cypress Garden Lake House on the shores of Lake Eloise. Old Cypress Gardens is a fading memory, just like the pool itself. To help preserve and honor the memory this magical place, we have dubbed our home on the shores of Lake Eloise the “Cypress Gardens Lake House.” The basic design for the new Florida Pool has been completed and we are scheduled for a Spring 2021 build. Follow us on social media to share the journey. 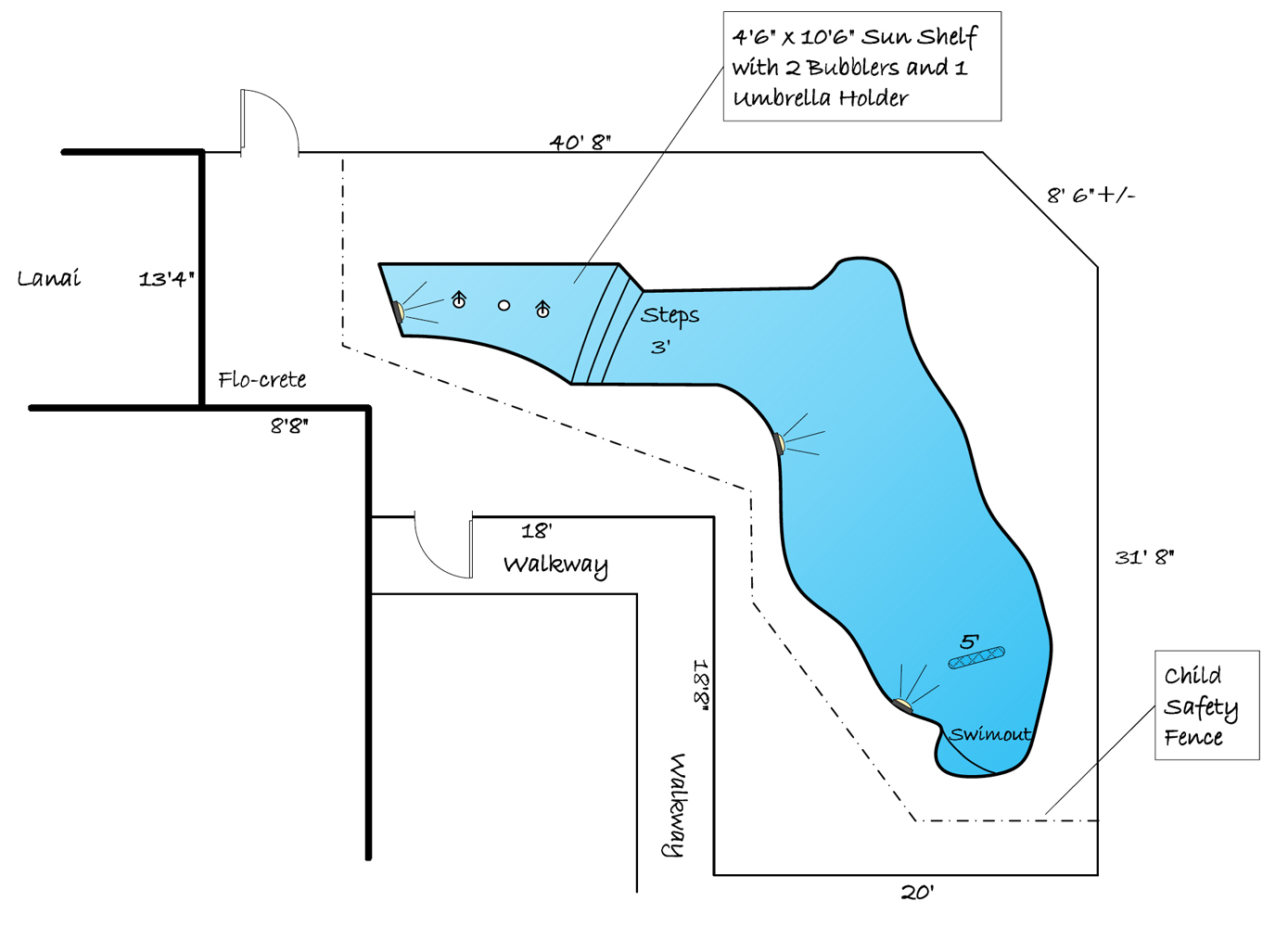 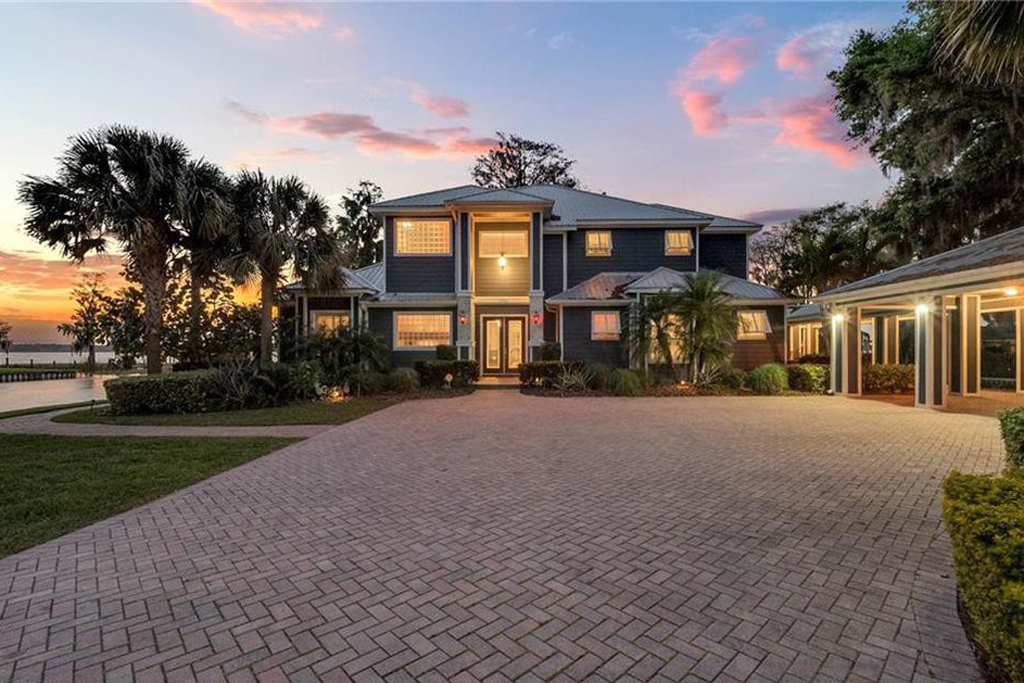 Cypress Gardens Lake House on the Shores of Lake Eloise

A Love Letter to Cypress Gardens: Blog posts with stories, images and videos