How does one place rules on such an arbitrary endeavor?

I have been thinking about this list since 2004, and have come up with a few guidelines to impose upon myself when deciding if something “counts” or not.

I’ve also spent a lot of time talking to my uncle Mike Murphy about the list. He has provided valuable insight as a waterman with 50+ years experience at a high level.

If someone else decides to follow this path too I would love to hear your ideas too.

Each item must be ridden with its intended use.

Example 1: a back barefoot step off ski implies backwards barefooting and a step off. It’s not enough to just cruise on the ski.

Example 2: SINGLE freestyle jump skis became popular in the 1980s. To give myself credit for this one I would have to go off the ramp and do a trick. Doesn’t look like that’s going to happen anytime soon so it’s not on my personal list.

For non-traditional rides, only one item per group.

Example 1: I have ridden both a pizza box and a plyo box (wooden box used for exercise). Even though they are very different items I limit myself to only one box.

Example 2: Shoes, lids, tables, etc. One could go on a long time riding variations of each of these examples, and others like it. While I experiment with different rides with each group, I only take credit for one.

For purposes of easy demonstration, my first default is a photo showing the item being used as intended. Jump skis (going off a ramp), slalom course ski (running the buoys), trick skis (doing a trick), etc. As a general rule I need to demonstrate clear control of the item for at least 15 seconds.

My second default and undeniable proof for riding each item would be video. I will be working towards this for all rides in the future.

Boat vs. Boom vs. Cable.

I have held myself to the standard of riding each item behind the boat whenever possible. Riding an ice chest while hanging directly on to the boom does not make the grade in my book. Some rides are specific to the boom, and in this case I make an exception. Hand skiing is one such example. 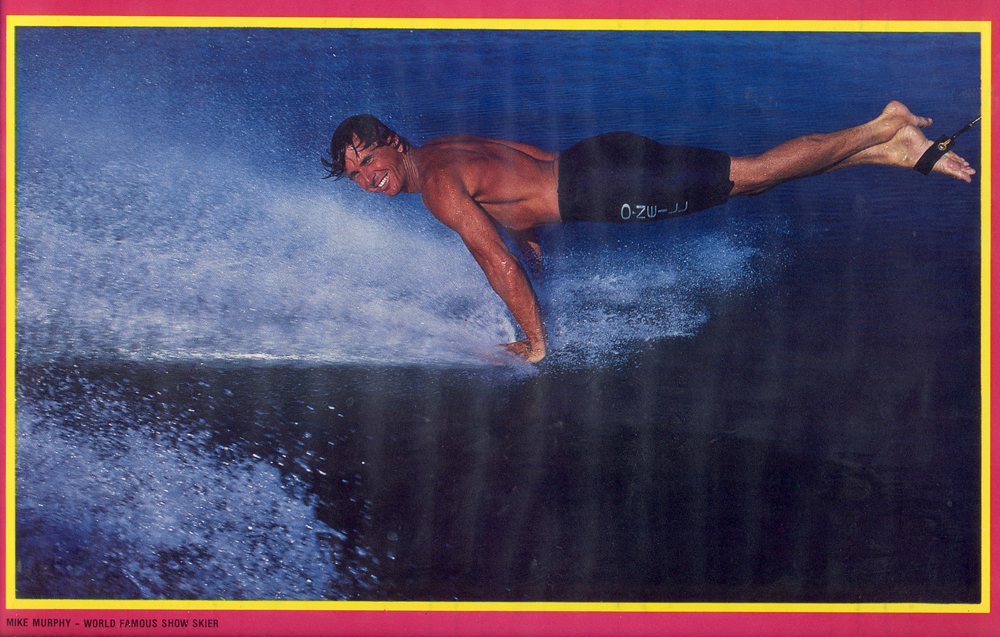 Riding on a cable system has unique advantages. The starting platform makes it much easier to get in position and slide up to speed. The cable also provides a constant upward pull, which helps to reduce the effective weight of the rider.

In Shaun Murray’s “Can You Ride It? “ video series on YouTube Aaron Perkins successfully rides a pair of 5 gallon buckets on the cableway. I tried to duplicate this feat behind the boat, but had difficulty finding a way to get started. I’ve added it to the list with an asterisk for cable. I would probably be able to ride many more things if I had easy access to a cable park.

Riding 5-gallon buckets on the cable

For now all things on my list are performed behind the boat unless otherwise indicated.

One vs Two of The Same Thing

I think this depend on the items. Kid’s training skis are a unique item, with a pair of skis tied together for stability. It just does not make sense in my mind to ride just one.

Example 2: Paling(s). When it comes to the paling (narrow would planks without fins or bindings), I take credit for both a single and double ride. The difference between one and two is so great that it makes sense in my mind to treat them as individual rides. I have also heard of an Australian race using these as a a single and doubles.

I have taken credit for skiing on seemingly similar items when there is a specific purpose for each variation of an item.

For example, the slalom ski comes in at least 3 varieties. The basic single ski is most often wider and easier to ride. It is meant for general skiing. A slalom course ski looks the same to most observers, but is much narrower in the tail section and usually has a modified fin for precision turns around buoys. I have a slalom ski just for the course, and have used it many times, but do not yet have any photos or video, so I have not given myself credit for this ride. The third variation is the hot dog slalom ski, developed in the 1990s. This ski is shorter and wider, which makes it easier for tricks. To get credit for this one it’s not just riding on it, I also have to do a hot dog trick to use the ski as intended.

The Disc & Its Variations

Figuring out how to credit the disc and its variations has been difficult. First, there are several sizes of the disc itself. I have already ridden a mini disc (18″ diameter), standard disc (3′ diameter) and large disc often used for placing other items on top (4′ diameter). I have decided to take credit for just one disc ride.

Now when it come to placing items on top of the disc there are at least 3 different things that I have repeatedly seen though the years: disc and ladder, disc and chair, and disc and barrel. They are unique, yet similar, so I have decided to count “Disc &” as just one ride. Theoretically a person could just keep adding another item on top of the disc and call it a unique ride.

Explore the rich history of towed watersports with your guide, Tony Klarich