The popular water ski manufacturer Ski Master wanted to grab a piece of the kneeboard pie in the early 1980s. They bought Tunnel Board in 1981, who was still hanging around in a distant second place to Hydroslide.[i] Ski Master kept the original thin profile high performance board, and expanded the line with foam filled price point board designed by uncle Mike. Murphy was already their front man as one of the world’s best all around skiers, and they cashed in on his years of kneeboarding experience too. 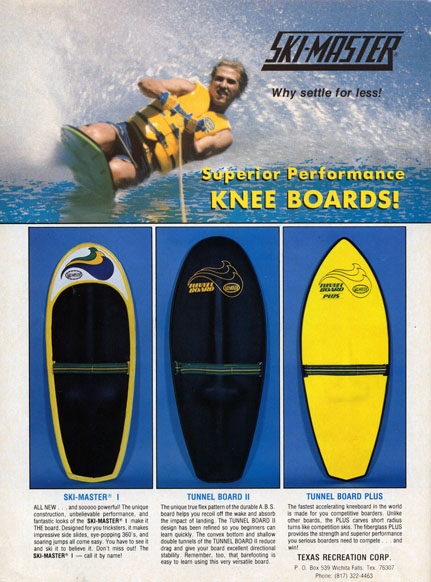 Ski Master was the First Big Ski Company to Get Into the Kneeboard Business, 1982 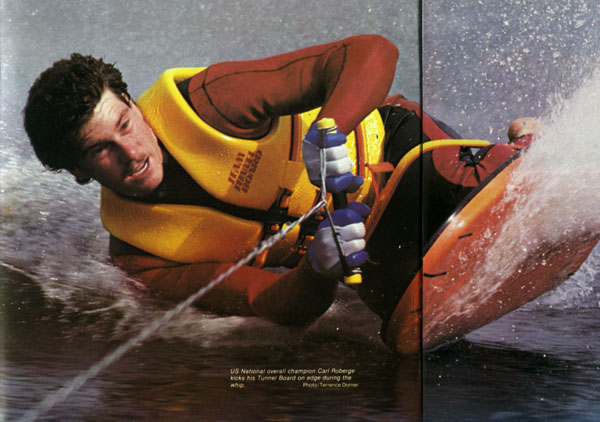 I watched it all unfold while working at Mike’s Ski shop on the Colorado River. The bold pictures and stories made me dream of someday being a famous skier too. I was already doing kneeboard moves that were better than anything I saw in the magazines. I was a teenager stuck in the backwoods while all the exciting action was happening in Florida. It reminded me of Luke Skywalker in Star Wars, stuck working for his uncle on Tatooine. That was soon to change. With uncle Mike as the designer for the new Ski Master kneeboard, the family connection got me a weekend job in Texas riding for their promotional film in 1982. My big trick was the same one we had been performing at the River ski shows to great acclaim and applause: the two-man heli over. We both used 47’ ropes. Mike rode behind the boat and leaned forward while I jumped over the top and did a 360 spin off the wake. The marquis move of our Parker ski show was finally captured on film and presented to a national audience for the first time. It was my first big appearance as a serious rider. The buzz from the performance got me named to Team Tunnel Board along with Carl Roberge, Ricky McCormick, Lucky Lowe, and Kurt Schoen.[iii] 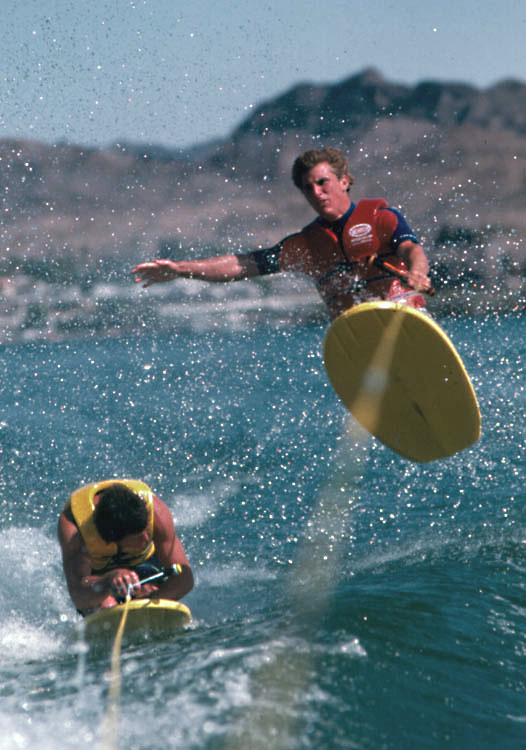 A Wake 360 Over Uncle Mike. I Scored My First Magazine Appearance with This Photo Shoot. (Brewer, 1983)

The next year I was still working at Mike’s shop on the River. 1982 was my breakthrough year, inventing four of my own hot dog moves on a slalom ski. Mike felt the pressure from my growing skills as a hot dogger and kneeboarder, so he took every opportunity to reaffirm his position as the top dog.

One day on the River, Mike boasted that he could do a wake helicopter standing up on a kneeboard. No way, I thought. I had been standing up on a kneeboard for years, using them like a cross between a surfboard and a single trick ski. I smacked the wake and pretended I was doing turns off the lip of a wave. I regularly spun my board around to ride switchstance. Heck, I could even do surface 360 spins standing up. But a wake 360? There had to be a gimmick. I asked Mike if he was using bindings.

“Just a stock kneeboard,” he replied. “Nothing added. And I’ll bet you 20 bucks I can make one in my first five tries,” he challenged.

I took the bait and fell for it hook, line, and sinker.

There was a gimmick. Mike started by whipping out his new trick board from Ski Master, the SM1, which was a little lighter and smaller than any previous kneeboards. Next, he took the knee strap and pulled it tight so that it laid flat against the kneepad. Then, he tied a knot in the strap where it came out of the footman loop on the right side. He stood up and jammed his feet under the strap. Both feet were facing forward, spread out as wide as possible. Putting his feet in that position put tension on the strap, which was enough to hold them in place on the board. He had created a makeshift binding out of the strap. There was nothing added, just like he promised. I was already saying goodbye to 20 hard earned bucks.

Mike started from his shop by performing a sliding dock start with a two-foot drop. Next he threw some smooth wake-to-wake jumps. It was impressive. Then he nailed the wake 360, just like it was well-polished show move. He gave each of his brown biceps a big kiss and waved to the non-existent crowd. He collected on his bet as I wondered how he kept coming up with moves to one up me.

Losing the bet was well worth the money. Mike showed me yet another new way to ride, and I immediately set out to beat him at his own game. Stand-up riding felt familiar, just like riding on two trick skis. It wasn’t long before I had all my surface turns, 180 wake turns, and wake helis both ways. 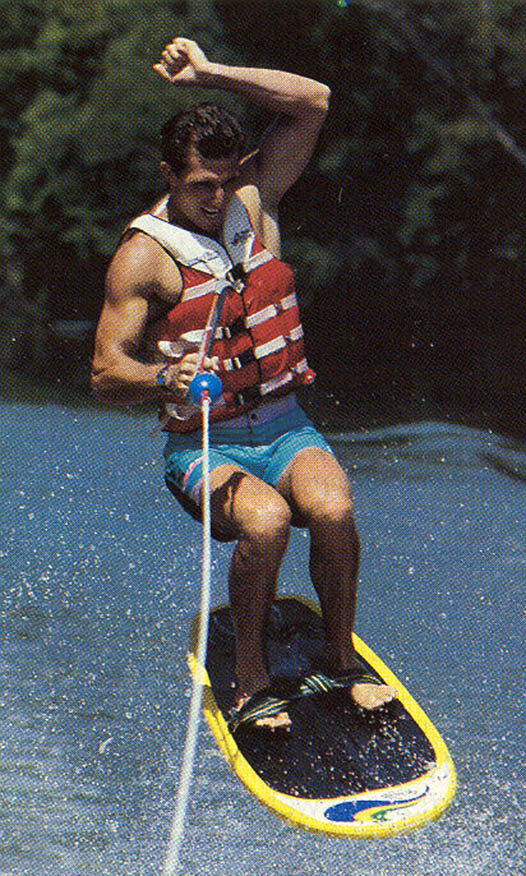 The Strap Acted as a Makeshift Binding for Stand-up Tricks, Admissible in Early Competitions. (McLeod, 1986)

Wake 360 Standing Up On A Kneeboard