The next big boost in kneeboarding came from the man most recognized for popularizing the sport. Danny Churchill, quarter mile speed ski record holder, obtained the rights to Glide Slide in April, 1974.6 He was a former employee of Glide Slide who knew the business. From the next few years Churchill redesigned the teardrop shaped Glide Slide to reduce drag and make it more stable. In the winter of 1977-78 Churchill introduced his new board, now renamed the Hydroslide, with an ad in Spray. He switched from blow molding the plastic shells to rotomolding them and the first Hydroslides went on sale for $49.95.[i] 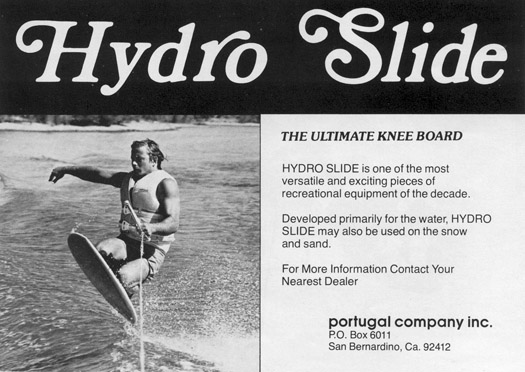 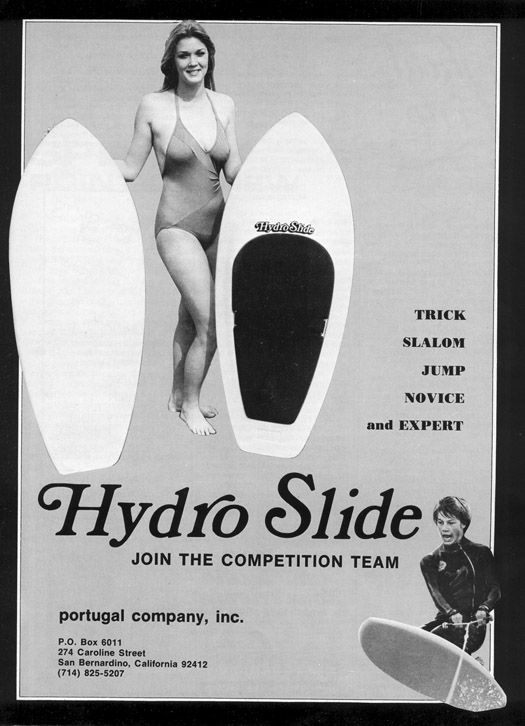 Churchill worked tirelessly to increase the visibility of his new kneeboard. He established a national sales network, hit the trade shows, and produced a film for dealers so that potential customers could see how easy and fun kneeboarding could be. The burgeoning mail order business became a prime target for both sales and promotion.

Churchill pushed hard with the trade magazines, and during the next five years sales of the Hydroslide increased dramatically. By the late 1970’s Hydroslide had reached and maintained a growth rate of 50% per year. By 1980 kneeboarding was firmly established with at least 120,000 participants, due in large part to Hydroslide and Tunnel Board.6

The 1977 launch of Spray magazine changed the face of the water ski industry, and was instrumental in helping kneeboarding find a bigger audience. Water skiing already had a publication called The Water Skier, which was put out by the American Water Ski Association (AWSA). But The Water Skier covered mostly 3-event tournament skiing, and was old fashioned compared to the bold photos and feature stories that appeared on the pages of Spray. 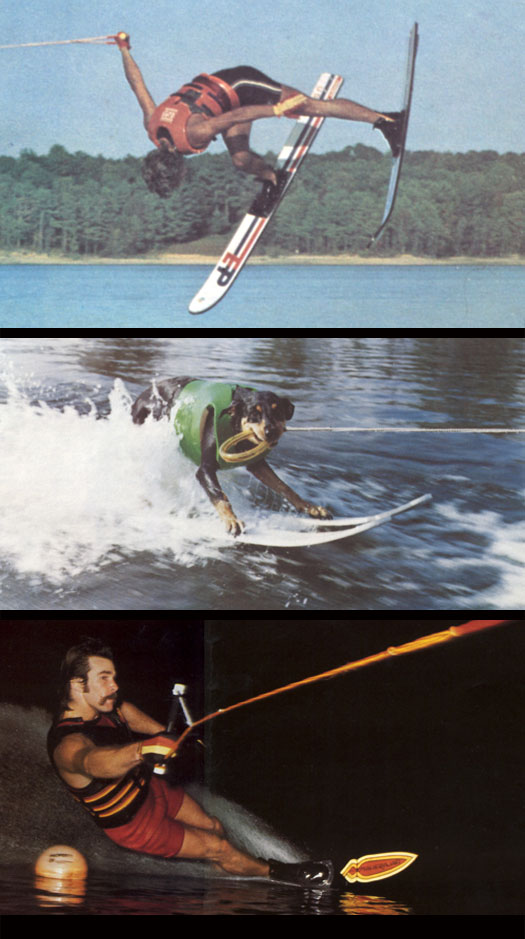 Spray had articles and advertisements that covered the complete variety of watersports, not just tournament skiing. Wayne Grimditch was featured doing flips   off the ramp on his cut down freestyle jumpers. Readers saw colorful pictures of   Lee Kirk, a Long Beach local, who used asbestos booties to set a new speed barefoot record. Many top show skiers were represented, like Skip Gilkerson in one of my all time favorite shots. Skip rode a pair of shoe skis while waving and smiling like it was a million dollar move. But it was his green Elvis style jump suit with sequins that took the cake. What a showman! 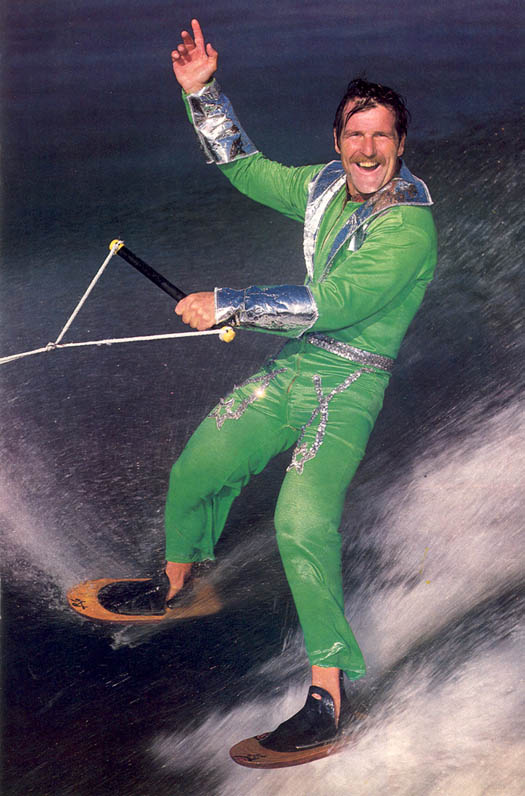 Spray Magazine showed kneeboarding too, and Danny Churchill took full advantage of advertisements and promotions. He hired the World Champ Sammy Duvall to appear in full-page color ads riding a Hydroslide. Sammy was a phenomenal skier and dynamic personality who made kneeboarding look fun. The colorful ads ran month after month for years, and Sammy became kneeboarding’s first star. When it came to promoting Hydroslide, no stone was left unturned. Some of the first how-to articles for kneeboarding were paid advertisements by Hydroslide. 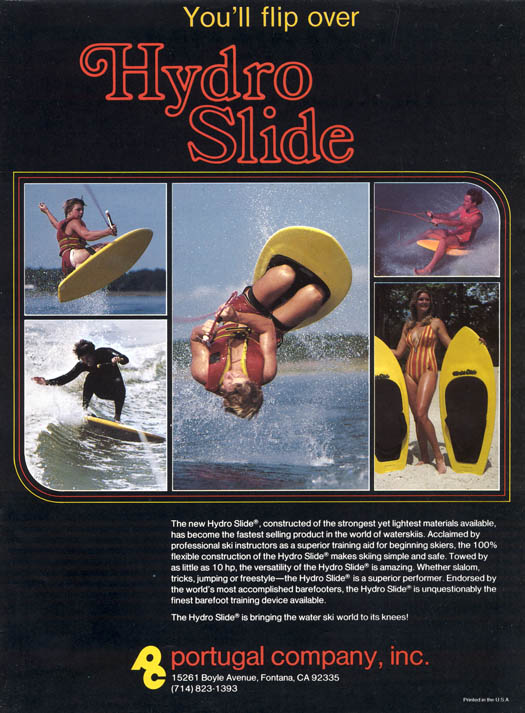 This Ad with Sammy Duvall “Flipping” Really Fired Me Up, 1979

Churchill kept it rolling with the Hydroslide photo contest starting in 1980.[ii] Readers from all around the country sent their best shots to compete for a free MasterCraft for a year. A full-page ad ran each month, featuring pictures of kneeboarders jumping, spinning, and crashing on flip attempts. Other contestants wore wacky costumes, rode with a dog, or snapped cute pictures of their kids. Photos flooded in; over 12,000 in a single year at the peak of the four-year promotion. 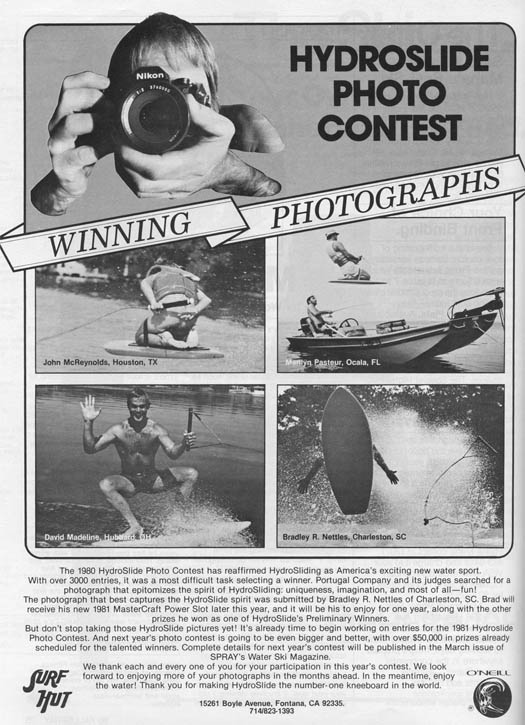 In 1979 another magazine, World Water Skiing, entered the market, and there was more coverage than ever for the wide world of skiing. Hydroslide advertised there too, and the following year World Water Skiing ran the first U.S. cover to feature kneeboarding. The rider was Brett Wing, World Champion barefooter, and all around great skier. Spray countered with a kneeboarding cover of their own, this time with Camille Duvall. 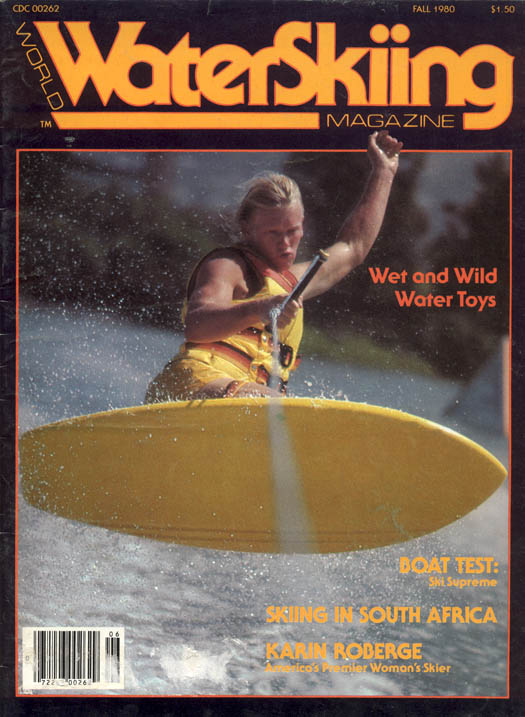 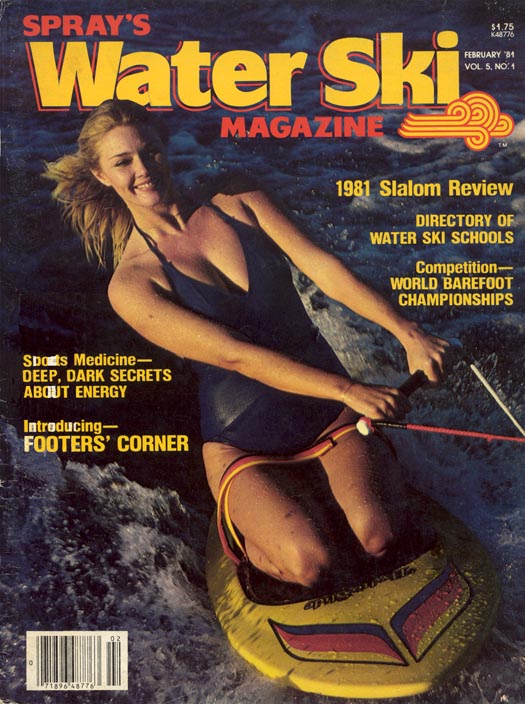 With Two US Skiing Magazines, It Wasn’t Long Until WaterSki Featured Kneeboarding: This Time With Camille Duvall. (Jungle, 1981) 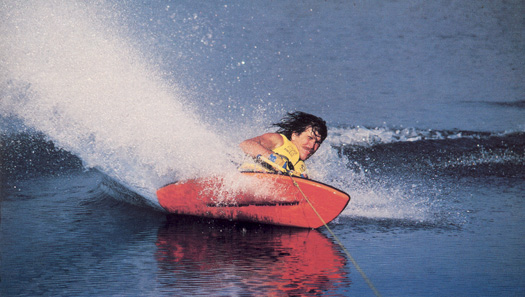 Mike Was Determined to Present the Kneeboard as More Than Just a Toy. (McLeod, 1979).

Still it was Danny Churchill who had the magic touch. Hydroslide was a juggernaut. On the heels of his success Churchill sold Hydroslide in 1981 to the giant merchandiser, Kransco, the maker of Hula Hoops and Frisbees.[iii] Churchill maintained a key roll at Hydroslide and the new infusion of big bucks brought kneeboarding to even greater heights. A new design, the Hydroslide Pro was introduced, and went on to become the all-time best selling kneeboard. Hydroslide was unquestionably the hottest thing on water. In a battle to sell even more kneeboards, the mail order companies like Bart’s and Overton’s started running full-page ads with the must-have water toy of the early 1980s. Everyone was talking about Hydroslide. 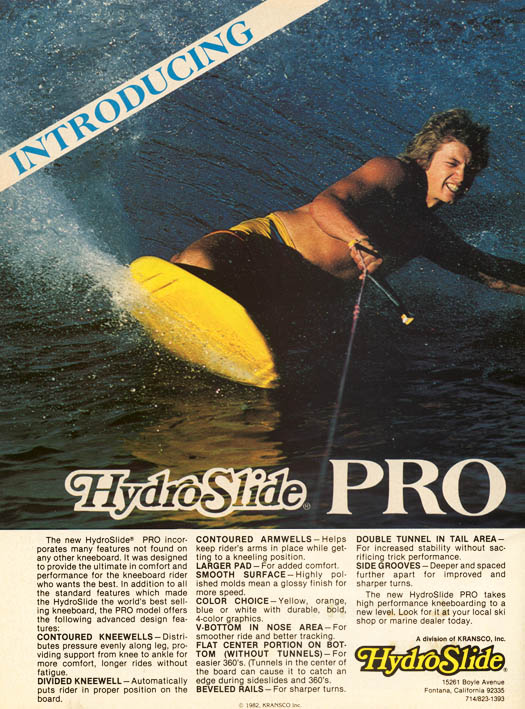 Sammy Duvall was The Man for Hydroslide, 1982

Brett Wing Highlights, 1986. One of the greatest all around skiers ever!