In 1978, at the Endo’s International Speed Skiing Championships, I witnessed kneeboarding insanity.

The site was the Long Beach Marine Stadium. I only remember the kneeboarder by his nickname, Dumbdee. He was a Long Beach local who talked the promoters into letting him have a speed run on his Tunnel Board. Just to keep things “safe”, he used two straps across his knees to avoid a high-speed ejection.

The drag boat came roaring down the course and Dumbdee was hanging on for dear life. Each of his giant bounces was about 4 feet high and 30 feet long. The bounces got even higher and longer as he accelerated through the quarter mile. He ran the course at nearly 100 mph. Even the drag skiers agreed that his death defying run was stupid, crazy, or both.

When a guy gets fame for insane moves, the lure to keep doing them can be overpowering. Dumbee’s big move was massive air on his kneeboard. He commonly rode long line at 35 mph behind big boats that had big wakes. He took insane cuts and launched himself into spine-tingling jumps. He was the first person I ever remember watching who absolutely charged the wake. I often saw him riding at the Marine Stadium, easily jumping 8-10 feet high and landing 20 or 30 feet past the wakes. And this was in the 1970s. No one except ramp jumpers got that much height. But big air was Dumbdee’s demise. He died after going out the front on one of his massive jumps on the Colorado River.

It looked as if it might come to blows, but Mike accepted the challenge, then added one of his own. A $300 bet that he would ski at least 5 mph faster than his nemesis Taylor.

It was the first and last time Murphy ever entered a drag ski race, but he had some speed under his belt as a veteran circle and endurance racer. Mike had to borrow a ski, but the only one he could get was the opposite foot forward. There was even more adversity: he had never been behind the boat or driver. Meanwhile, Taylor posted a respectable run of 110 mph. It was Mike’s turn to put up or shut up. Uncle Nick swam the towrope out to the driver, Mike requested 115 mph, but Nick directed the driver to try and hit 120 mph.

Murphy rode an 8-foot wooden Bemis racing ski as fast as possible for quarter of a mile. His style down the course was unlike any of the other racers. Mike stood up tall with both hands out in front, while the other racers crouched down and wrapped up to resist the massive acceleration. Mike blazed down the course on his first pass. It looked so smooth and easy. 118.92 mph flashed on the board from across the Stadium.[i] The crowd of over 3, 000 cheered. I jumped up and down and told everyone, “that’s my uncle Mike!”

The bet was won, but Mike still wanted to win the event. Skiers had to back up runs to within a few percent to get an official speed. Mike’s second run was just as smooth, and only a mile or two an hour slower. 118.92 mph was the top speed of the day and Murphy was crowned the International Speed Ski Champion. You would think that he had been doing it all his life. 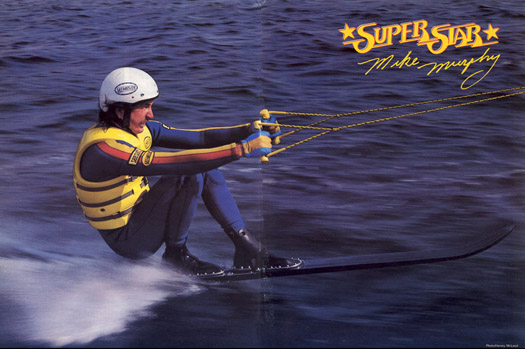 Murphy Proves Himself as One of the World’s Best All Around Skiers. (McLeod, 1979)