One of my scariest moments in skiing came during a ski show in Guayacil, Ecuador. Fabrizio Malnati invited the HO/Hyperlite team south of the equator to help promote his ski shop. The team consisted of Darin Shapiro, Bebe Anderson, and myself.

During one part of the show Darin and I both rode behind one boat. I kneeboarded while Darin jumped over me on his signature model wakeboard. On one pass I marveled as Shapiro fired off a series of air roll to reverts just a few feet away. Air flips in wakeboarding were brand new, and watching him generate the angle and speed to flip without a wake was amazing. We finished the show and all three of us landed on the beach that was packed with thousands of excited fans. Advertisements for the show had been running non-stop on TV, and they had obviously worked. 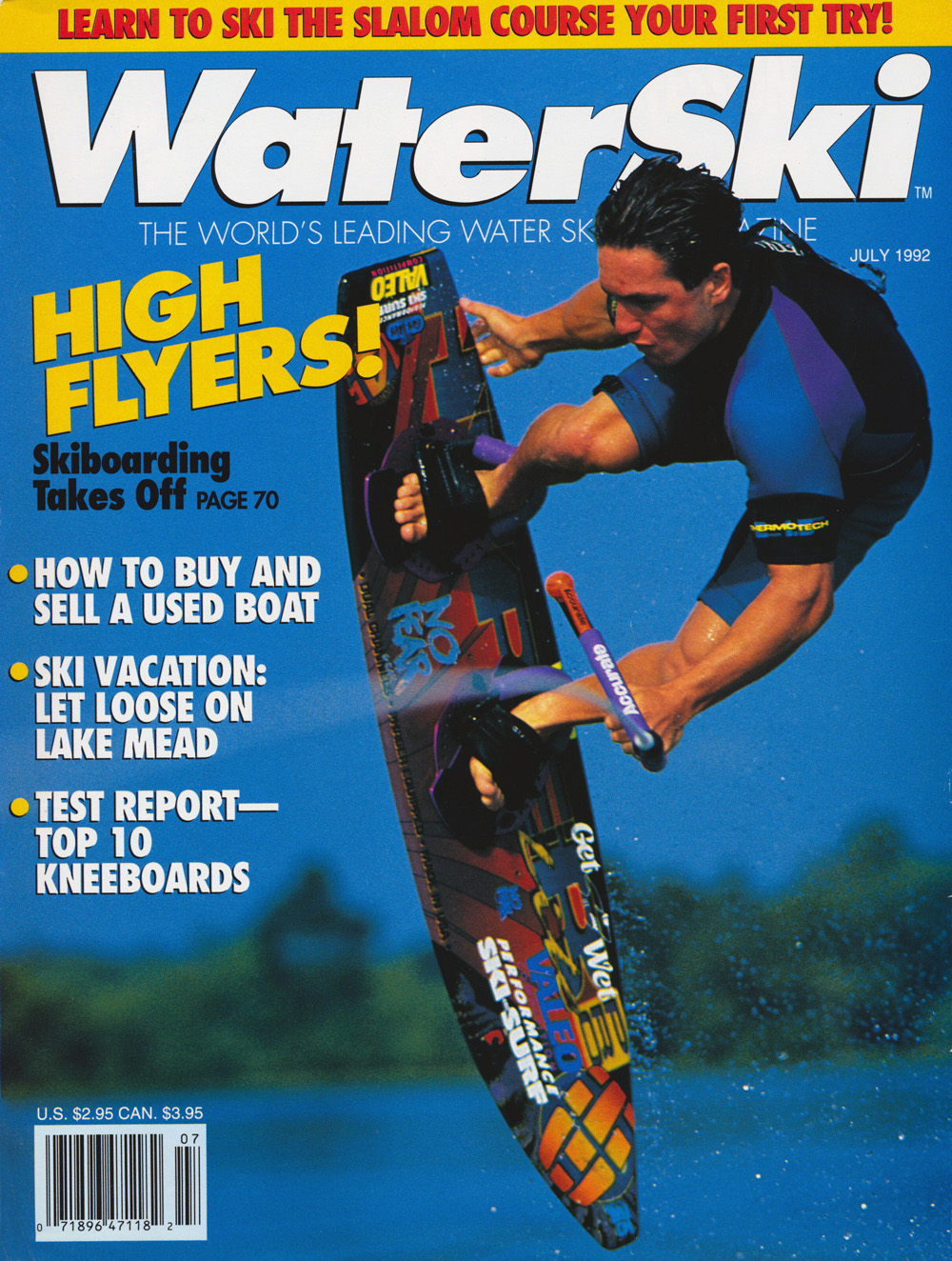 The crowd surged toward the three of us and it got a little scary. Water skiers never got this kind of attention in the U.S. Now the mob started touching us, and the hands turned increasingly persistent. They started to grab. Men pushed their daughters on Darin and me. Bebe, a strikingly beautiful woman, attracted the opposite sex too. Everyone wanted a piece of us. We were saved when security barged in and made a line of escape by forcefully pushing and shoving the agitated crowd back. Somehow we made it out of there. 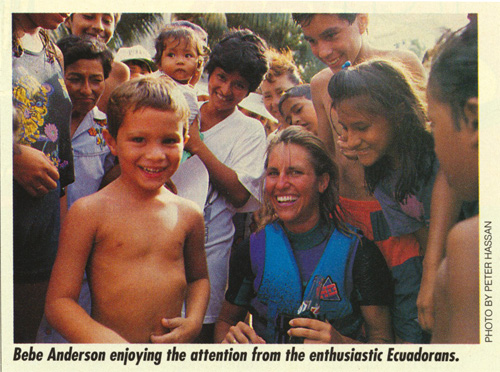 On The Beach with Bebe Just Before the Mob Scene (Hassan)

Our surprises weren’t done yet. That night we partied with Miss Ecuador, and some big shots from Chiquita. But the next day brought another reversal of fortune. The morning newspaper ran fire-filled pictures of the L.A. riots after the Rodney King verdict.

I was thousands of miles away, and there was a front-page photo of the mayhem just a few blocks from were I went to Chiropractic College. We didn’t get much news of the event, but even so, I was nervous to go home. Los Angeles was on a mandatory evening curfew, and I had to drive home from the airport at night. The trip from LAX to my house in Long Beach was surreal: maybe 10 cars the whole way once I left the airport. There were miles and miles of completely empty freeway. I had gone from the heart-pounding press of a mob to the eerie emptiness of a major city under siege. Strange days indeed.

In the course of my skiing career I took thousands of flights, and most were smooth and easy. But every once in a while I experienced a white-knuckle plane ride. Clear air turbulence always elicited screams from passengers, especially when the flight attendants bounced around the cabin. On another flight during a landing in Chicago our jet wing lurched a few inches above the runway after we flew into the wake of another plane. A brisk crosswind had blown the turbulence to our adjacent runway. As our plane tipped hard left I had enough time enough to be glad I was sitting two rows from the emergency exit in the rear of the plane. That was really close. On a night flight to Reno I was bumped to first class to help even out the weight distribution, but the payback was severe turbulence during descent and a high speed landing during a windstorm. The captain came on to tell us what he was going to do, so we all had time to think about what was about to happen. We slammed down hard enough to open a few overhead bins, but it was good to be down safe. I never had a flight that had to take evasive action, but there were several times I saw other planes zoom by in what I would call near misses. But my scariest flight was the one I never should have taken.

Normally, when it came time to fly, I just packed my bags and got on the plane. I never gave it a second thought. Until one winter day when I was packing for the IMTEC trade show in Chicago. I had a funny feeling. It kept gnawing at me. “Danger ahead” was the message.

Instead of listening to the little voice inside my head I actually wrote a “goodbye note.” Really. It was something like, “If I am to die, this is what I want you to do…” I folded the note and stuck it on my dresser. The thought of doing this had never occurred to me before, or since. Now why, you may be ask, would you ever get on a plane after writing such a note. I honestly don’t know. Inexperience? Feeling obligated to get to the show? Disbelief?

The outbound flight out was uneventful, and I put all that mumbo jumbo stuff out of my mind. The show at McCormick Place in the Windy City must have gone well enough; I don’t remember a thing about it. It just blurred with the scores of other similar shows. Now it was time t o fly home, and the return trip was indelibly etched on my memory.

We taxied out onto O’Hare Field. My premonition about the flight was still covered over in suspended disbelief. I was happy to be done with another show and headed home.

The captain announced we would be delayed on the ground indefinitely due to thunderstorms in the area. The blood drained from my face. I wanted out now. I was a cold clammy mess with a pounding heart. I stayed in my window seat like a caged rat ready for experimentation.

We took off twenty minutes later between banks of ominous clouds. It was just getting dark and lightning illuminated the billowy black columns. In a few minutes we were in it, and we stayed in the soup for the next three hours: solid clouds and severe turbulence.

The plane bucked and bounced the entire time. The captain ordered all flight attendants to remain seated. I couldn’t have eaten anyway, I was deathly afraid. I pulled down the window shade and squeezed my eyes tight. A flash, then another interrupted me. It was disorienting. I peeked out the window.

I knew I was going to die.

Lightning struck the plane several times. The plane lurched violently. People cried out and sobbed. Every bump signaled an impending spiral to the ground. For three unrelenting hours it went on.

You can only be scared so long. The constant release of adrenaline does not keep working. I closed my eyes in a half stupor expecting every moment to be my last. I was resigned to my fate. I had lived a good life. My only regret was not having a family and kids.

The captain announced our upcoming landing in Salt Lake City. That ratcheted up the fear again. We were still in the clouds and turbulence, and all I could think about were all those nearby mountains. Out there in the dark, waiting.

I jumped in my seat to the sound of the flaps going down. Next came the landing gear. We went lower and lower but were still bouncing in the clouds. All of a sudden the plane surged upward with full thrust on the engines. People screamed. Not a word from the cockpit, they had their hands full. I figured we had to be going around for another attempt.

We came in for another attempt. Flaps down. Gear Down. Plane down? We broke through the clouds mere moments before touchdown. The lights of the runway filled the window and we were safe. At that moment I knew the danger had passed, and I slept like a baby on the connecting flight from SLC to LAX. That little voice was telling me something, and next time I’m going to listen!