I started posting on Instagram in May, 2013 and it has been an amazing journey. My brand of skiing is visual, and people everywhere are responding to it.

In the days before the digital revolution and the widespread use of social media, the magazines and manufacturers were the main way to get noticed. Today they no longer hold the keys to the kingdom – they are just another avenue for getting the word out. That’s good for me because so far they don’t seem that interested in a soon to be 50-year old guy who tries to water ski on just about anything!

This was my first time barefooting with the handle-cam. Two words of advice: 1. Put the rope on release from the boat so that the camera does not drag in the water after a fall 2. Test to see if the entire rope and handle floats before riding. I almost lost my whole rig the first time it was released from the boat! 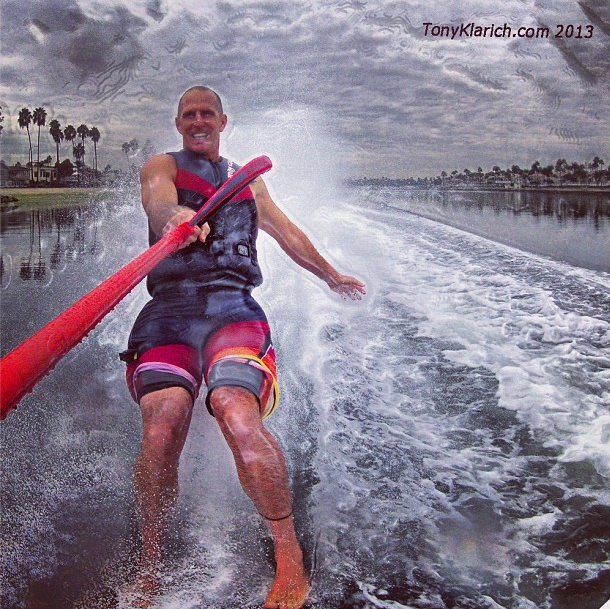 Bringing back a classic ride with a new twist. One foot, one hand, and a GoPro attached to the end of a long piece of wood. I would much rather climb this ladder on water than on land! 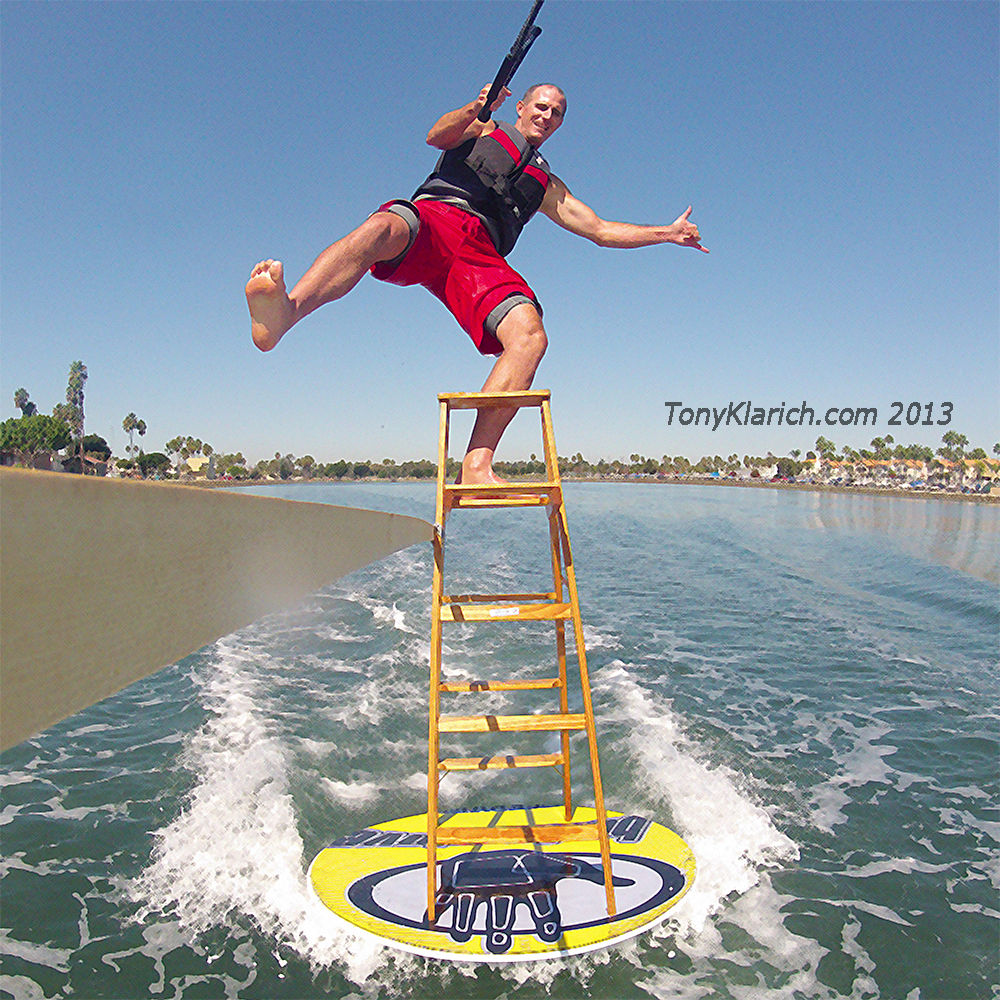 I’m pretty happy with version 2.0 of the handle-cam. Still need to do some tweaking with the camera angle, but the first run out was a success. I ended up using a solid piece of PVC pipe, and tying it in to the V section of the handle – the whole thing acts like a GoPole. Move the handle, and the camera moves too. It’s gonna be fun to experiment with this unique angle for slalom, barefoot, hydrofoiling and 47 other rides… 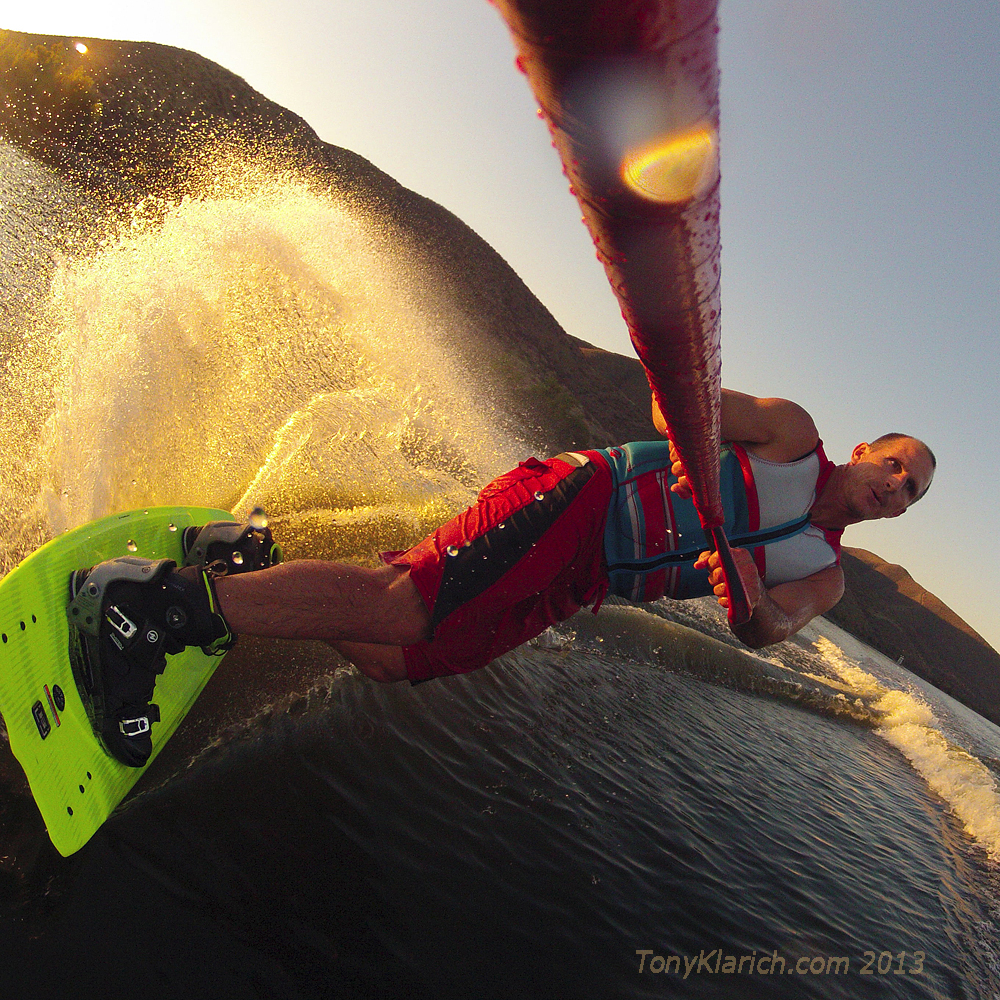 My uncle Mike (Murphy) celebrated his 65th birthday this week with a couple dozen big back rolls. The founding father of foiling is riding his brand new Next Foil. Mike has been the guiding influence in my riding for years, from his drive to create new rides, to staying active well into his sixties. 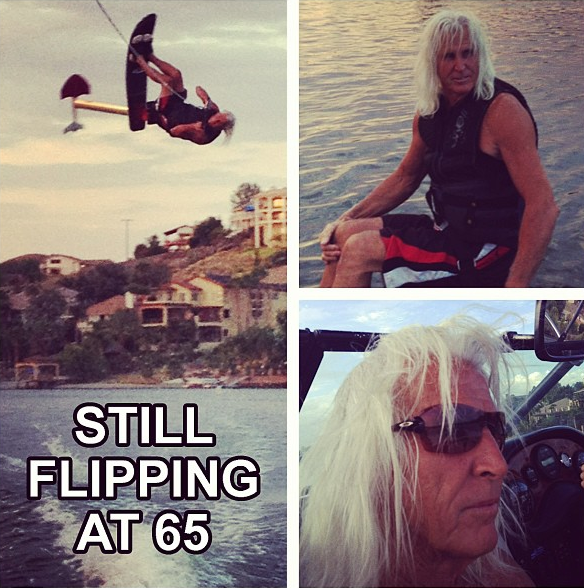 6 – Slalom Ski Sinking in a Shroud of Spume.

The GoPro can transform an ordinary moment into something special. 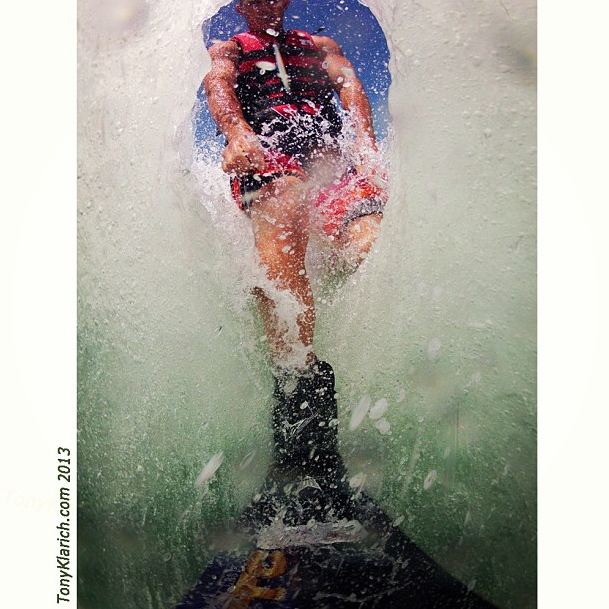 “That’s a little crazy – why are you doing this?” has become a frequent question concerning my skiing, so here are a few answers. 1. Doing the same moves on the same rides for decades got boring. 2. My uncle Mike has always been about innovation in skiing. He’s rubbed off. 3. It’s been fun trying to figure out how to ride something new. Often times it’s more of a physics problem than anything else. Like how would you deepwater start a stock ironing board? 5. There’s always a sense of accomplishment doing something that has never been done before. 6. I’m not good enough, nor do I have the desire to learn big moves. It’s “easy” to break new ground on something very few people, if any, are riding. 7 The best for last – I’m training for the 50-50, and having an event to train for (50 different rides in one day to celebrate being 50) has always worked for me – both in the water, and at my CrossFit boxes. 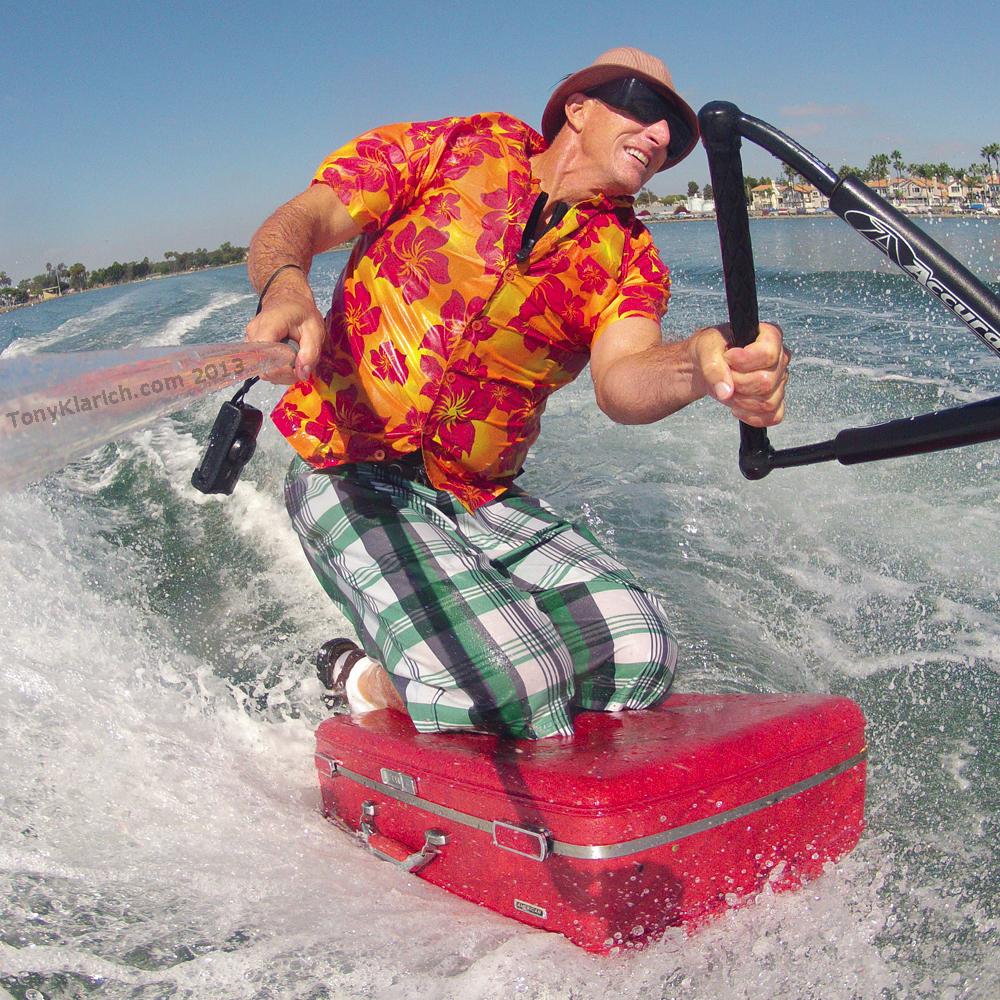 It’s not the “booking” in this photo that has me so excited (although it was fun). I’m tripping on the concentric waves of spray coming off that Guinness Book of World Records! In 40+ years of skiing I’ve never seen anything like it, and that has me thinking…what if you were to purposefully set out to create patterns of spray? I remember these old-time combo skis that shot jets of water out of the back about 10-15′ high. That was eye-catching, but I’m thinking about trying to take that concept to the next level. A one-man dancing waters, a ring of fountains on a disc, shaped bottoms designed for spray, not turning. Pretty sure there’s something here… 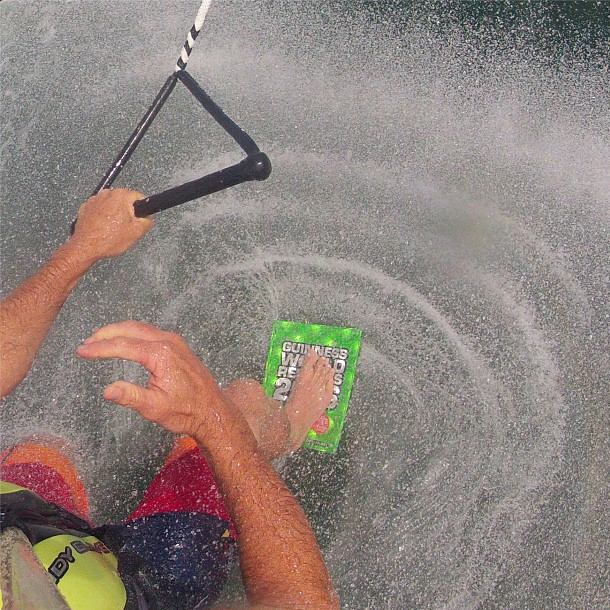 This was my first hydrofoil ride with the GoPro and GoPole. It was very awkward to ski and hang on to the pole, not to mention trying to get it in the right spot for photos. 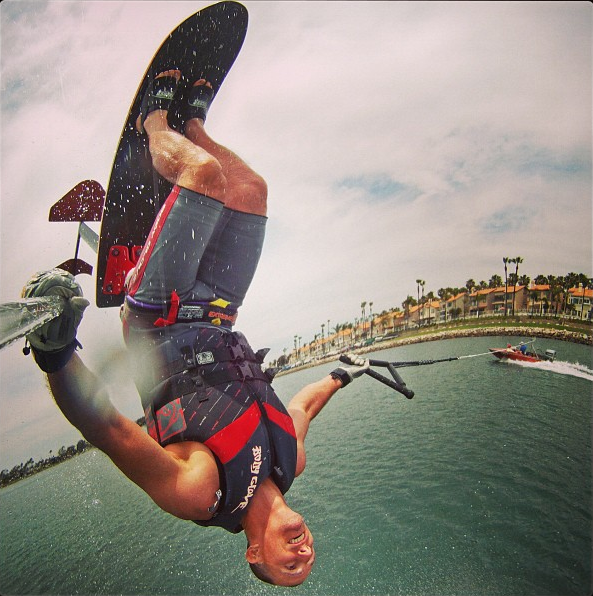 I taped on a 12-inch long closet dowel to the end of my GoPole to get the camera a little bit further away, and capture a wider view of the action. Ski West is a great place to ski, calm water and great color for photos. 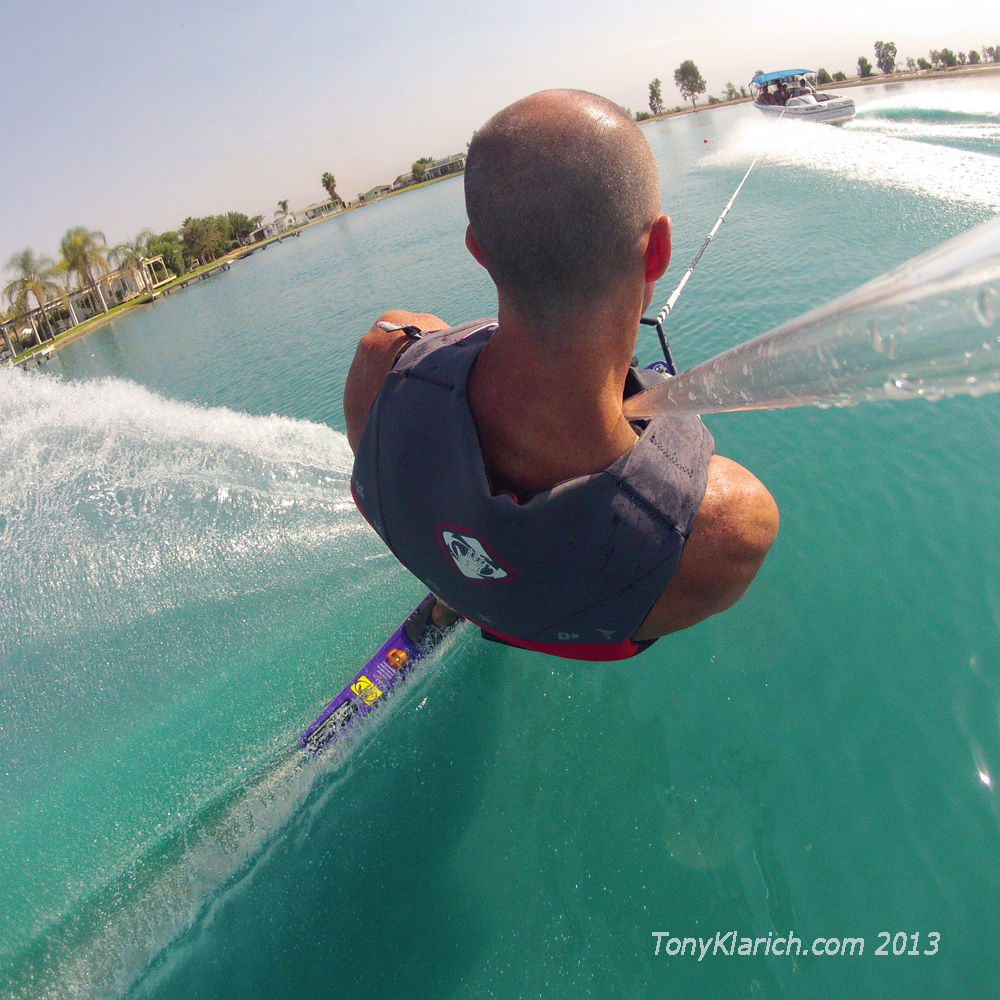 No Filter – The beautiful colors in this shot are due in large part to the blue dye added to this man-made private ski lake. The dye prevents sunlight from reaching the bottom of the lake and keeps vegetation growth to a minimum. 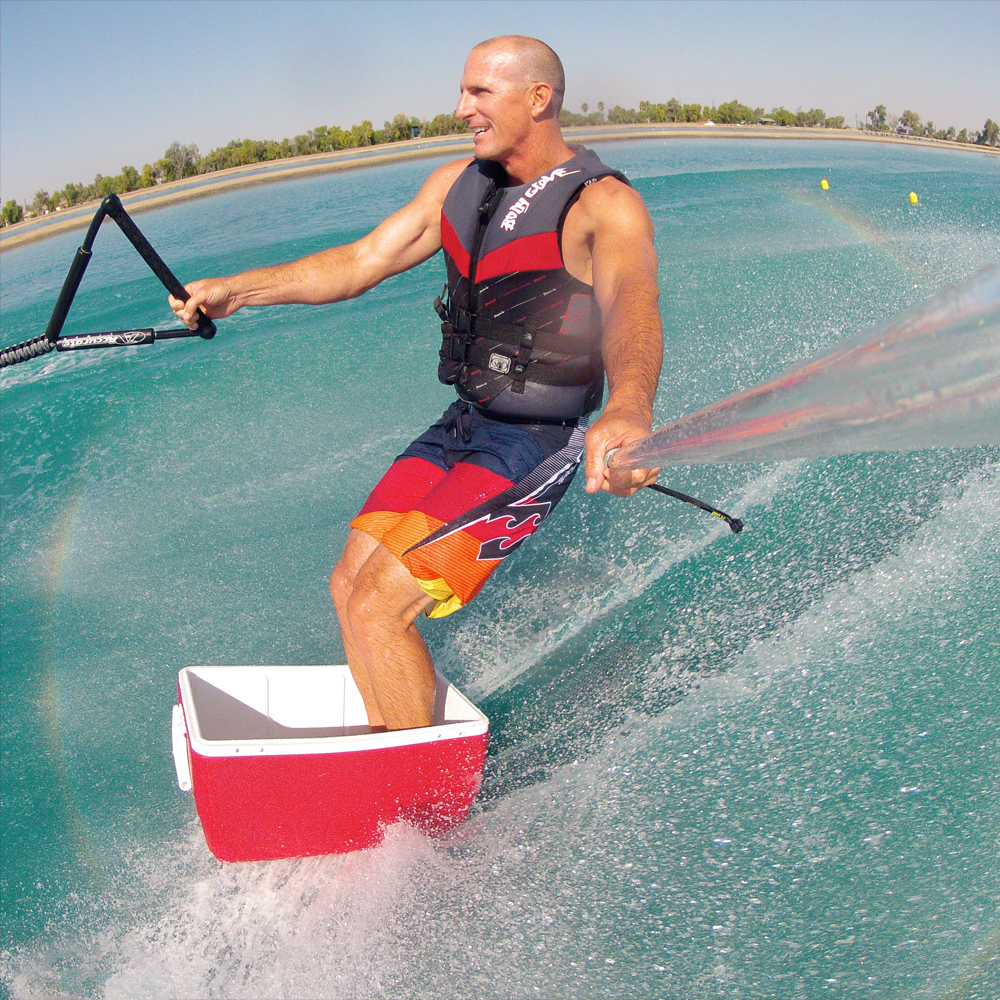 Support this blog with your regular purchases at Amazon. Just click through and purchase within 24 hours. Thanks! TK

A few repeats, but lots of new photos and even some video (riding the Guinness Book) from an amazing year on the water!