In the fall of 1989 I wanted to do one last sick kneeboard move for the record. My longtime photographer Rick Doyle was behind the lens to capture the action frame by frame. I was on home waters; the Parker Strip, so it only seemed right to go back to the move that thrilled audiences at our River ski shows. Jumping over another kneeboarder was always a rush, but instead of a wake 360 over the top, I had plans to launch the biggest kneeboard front flips of my life. We added hundreds of pounds of extra ballast to the 21 foot Ski Eliminator boat to make a giant wake. I let my line out to 60 feet, pretty long for kneeboarding at the time. The extra rope made the wakes wider, so that even with the extra height and hang time I could still land on the down side of the opposite wake.

I had a healthy dose of fear pumping me up. My thing was never huge air, but sometimes you do just have to let it fly. I charged hard at the wake, and threw a huge front flip with slow motion rotation. I cleared the rider below by four or five feet and landed smoothly on the opposite wake. After a set of five, I pulled the plug and was happy to be in one piece.

Doyle got immediate interest in the dynamic shots, and the first appearance was on a giveaway poster for a fast food chain called Orange Julius. The pitch was: “Buy a hot dog combo, and get a free ‘hot dog‘ poster.” Doyle also added the shot to his groundbreaking CD of stock watersports photos. Anyone who bought the CD could use the royalty-free pictures, and many were used in magazines and advertisements around the world. 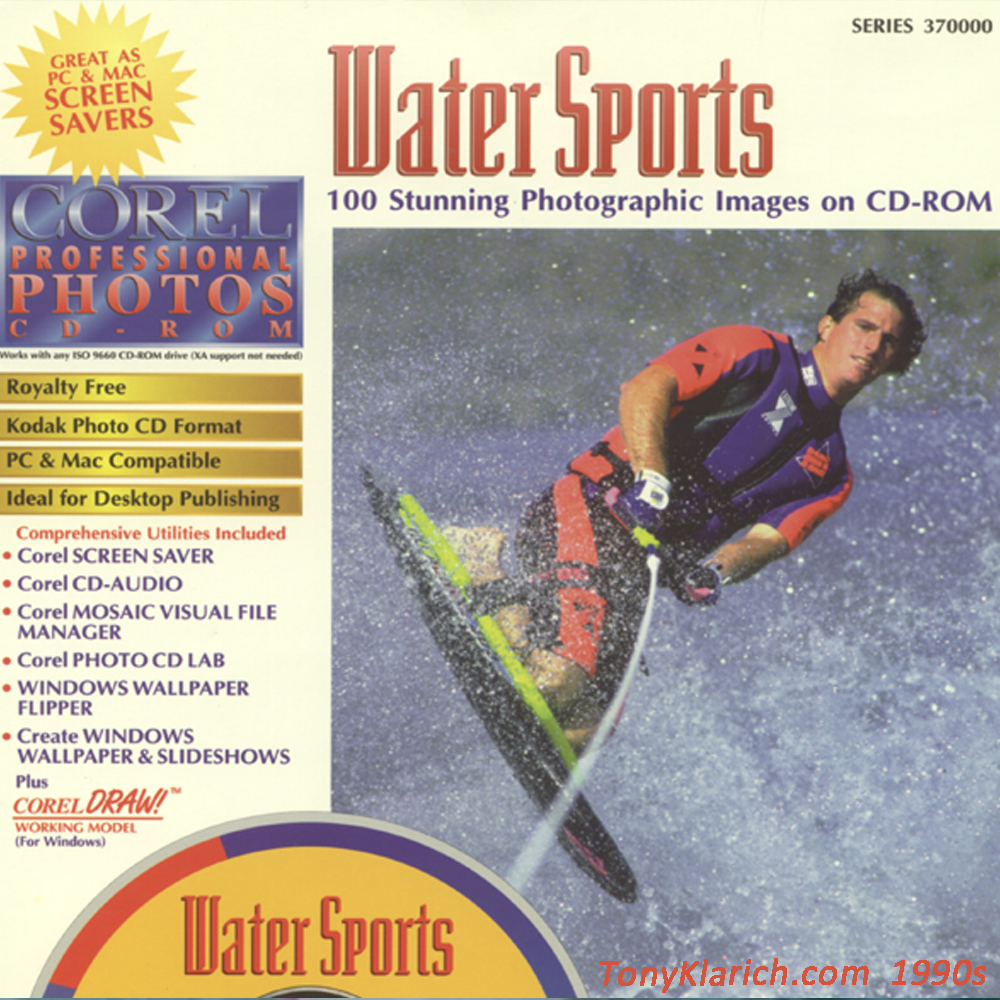 My Longtime Photographer Rick Doyle was a Pioneer in Royalty Free Photos for Watersports.

A few months later I walked into the Circle K mini market at the River and I saw myself on the cover of a magazine called Urban Fitness. It was another one of the Doyle kneeboard shots we had just taken. It was an exciting surprise and I bought the magazine to show my wife. As I was paging through the pictures and stories it slowly dawned on me that it was a gay magazine! I wasn’t ashamed to tell my friends — hey, it was a cover shot — and I got good-natured ribbing for months. When I analyzed the photo it became clear why it was chosen. Two athletic guys, both on their knees — hmmmmm? Our boards and outfits were hot pink, and of course it looked like we were having a great time.

I got the surprise again when my ex-girlfriend mailed a copy of Euro Gay magazine from one of her trips abroad as a flight attendant. This time the name of the magazine left no doubt as to the subject matter. It was another cover shot with me riding a hot pink kneeboard doing a big twisted jump without a vest. Nuff said.