Win Some, Lose Some: Adventures in Water Skiing, Kneeboarding

Win Some, Lose Some: Adventures in Water Skiing, Kneeboarding

If you compete long enough there will be times you should win, but lose. Conversely, there are also times that you deserve to lose, but somehow manage to a win. It’s all supposed to balance out. I’ve had a mixed bag.

My day to squeak out a win at a major event was after a missed exit gate in kneeboard slalom. I had just run the pass with ease, and somehow rode outside the exit gate buoys. I looked up with dread, but was amazed to see that all of the judges in the boat were looking down to their score sheets. They missed my mistake, and I got a free pass.

The other side of the coin came at the 1987 AKA Nationals in Austin, Texas. I got a double whammy there.

Each year of competition at the Nationals was tougher to win, and I was going for a three-peat as the overall champion. I was training hard, and knew the event was mine to win.

In the slalom event I trained on one of uncle Mike’s old Knee Skis. The thin profile edge and fast surface made it great for the slalom course. I was concerned about the strap coming undone, so I added a second one with a separate set of footman loops that were through bolted into the board. I rode that red kneeboard all summer without any problems, or any thought of safety concerns. It was a pleasant surprise to find the second strap actually improved my control, kind of like having a better fitting binding on a slalom ski. I was consistently surpassing my mark in the slalom course, which was the current National record. 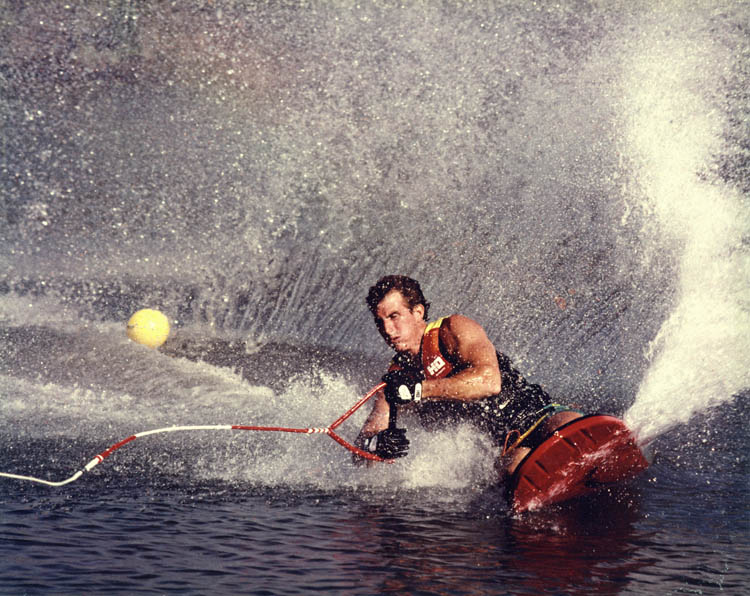 At the Nationals in Austin the first event was slalom. I confidently brought my board down to the starting dock. I was expecting a great score based on my hundreds of successful runs through the course. It was just minutes before I was scheduled to ski, and the safety director yanked my ride. He said it was unsafe. His reason: the bolts were sticking up too high above the footman loops. I had never even considered it. There had not been an equipment check before the event. The year before at nationals guys had pieces of metal screwed onto the bottom of their boards for tracking stability. No problem.

I had two minutes to borrow another board. I was shocked. Then I was upset. After that I just scrambled to grab anything. Nobody had anything like the one I was riding, so I used a foam filled job.

Even so, I somehow managed to post a score that kept me in contention for the overall title. I was always a fierce competitor.

I nailed my trick runs from start to finish. It should have been a top score in tricks with a shot for first place overall, but my score was 450 points low.

No credit on the frontside roll. What? I did the trick, and it certainly wasn’t a front flip. What about the rolling rule? I made an official protest and explained my position. Still, no credit.

No Credit on This Move Cost Me the 1987 Nationals

My longtime experience in doing front flips made it tough for me to learn the frontside roll. My rolls at the time were based on the front flip. The first half of the trick was like a front flip. Then at the apex of the rotation I turned my head and kicked my board to the side. I flipped in and rolled out. The rule was if you rolled out, it was a roll, not a flip, and would be scored as such. I think I got a no credit because it didn’t look like what the other riders were doing. Every time I see the video of that move I think about that day, and it’s still gives me a little twinge. In the end it was Mike Reinman in first place overall, Ramon Herrera in second, and me in third. Dixie Andrus continued her domination of the women’s event in the midst of five overall wins in six years.[i]

For me, the Karmic scoreboard read 1-1, with still more fun to come.