In 1986 Herb O’Brien decided it was time for HO Sports to make their first kneeboard. He asked me to design it, and I excitedly agreed.[i]

The first step to develop a new design is to create a test board out of foam and fiberglass. I didn’t have any personal experience in hand shaping boards, so I hired a professional at the Robert August surfboard shop in Huntington Beach, CA. We worked for hours on each of the four test boards. I stood by and watched the shaper as he cut and shaved the foam block into the general shape. Then it came time for the detail work, taking the foam off bit-by-bit to create the exact board I had envisioned. When the rails, rocker and overall shape felt right it was time fiberglass the foam board and take it out for a test ride.

The eternal quest in early kneeboard design was to have a board that carved nice turns and still did easy surface spins. The problem was that the addition of a design element to improve one would often take away performance from the other. For example, channels down the bottom of a board helped to turn, but at the same time hindered surface turns by adding drag. I found a way around the dilemma. My design for the Aerial 360 used a raised rail edge that gave riders the best of both worlds. I created a two-step rail that acted as a long fin when the board was rolled up on edge. It literally grabbed the water. Having this edge up higher meant that the main surface of the new board could remain smooth for spins.

When each new fiberglass demo board was ready to test I anxiously rigged up a strap and pad for a few runs. Some things worked, and some things didn’t, but each new design got progressively better. After dozens of test runs with riders of all ability levels, the board was done to my satisfaction. It was my first time as a solo designer, and the whole process took a couple of months.

I carefully packed the final hand shaped board for shipment to the HO Sports factory in Redmond, WA. It was used as a plug to make the actual mold for the board.

The Aerial 360 was a foam filled plastic board. The guys at HO added a contoured pad with ankle support. Herb added his version of the triple locking Velcro strap, and we were off to the races. In the midst of the neon frenzy of the mid 1980s hot pink was the top seller. In addition to my regular salary, I also received a royalty of a buck a board for five years. The extra cash helped me buy my first house in Belmont Shore, CA; just minutes away from the Marine Stadium and job number two as a longshoreman in the port.

I Designed HO’s First Kneeboard in 1986.

New products were usually rushed to market, with each followed by a promotional push. The Aerial 360 was no exception, so I was off to Florida for photos. The PA announcement on the plane woke me up: “please raise to all tray tables and seat backs to their full and upright position.”

The Delta L-1011 TriStar was a few minutes from touchdown in Orlando. I was always able to sleep on planes, and the non-stop overnight flight from LAX to MCO was like the Star Trek transporter. Beam me up, Scotty! I just closed my eyes and was instantly there. I opened the window shade that was my headrest for the past five hours. The sun was a just up, and bright beams of orange bounced off the myriad of lakes below. My destination was somewhere down there in the misty morning.

It was thrilling because the Aerial 360 was my first baby. I had been riding kneeboards for more than 15 years, ever since my uncle Mike Murphy designed the first one in 1972. Now it was my turn to put all that experience into a kneeboard of my own. It was something of a signpost, and I was ecstatic with the result.

Guy Filip, the HO Skis marketing director, was in charge of the photo shoot. In addition to the usual flips and jumps, Guy wanted shots of me carving a turn to show off the new edge design. Everything was dominated by fluorescent pink; the board, my vest, and even the shorty wetsuit. The pretty in pink pictures were also for the first HO Team poster. 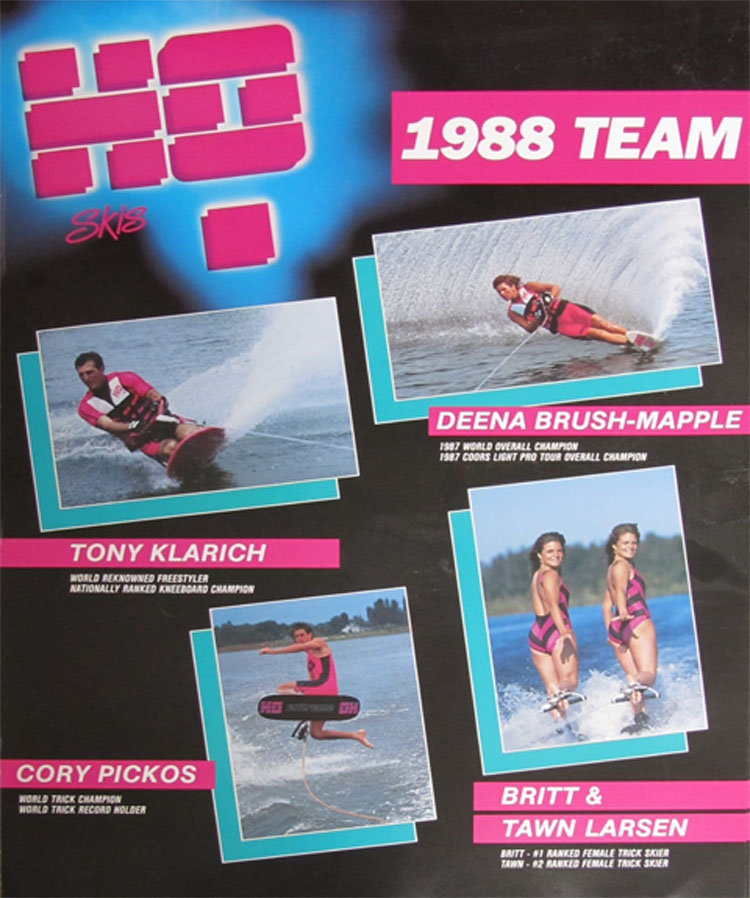 The whole photo shoot was done so fast that I was still a little groggy from the all night flight. In the afternoon I made a quick trip to WaterSki magazine to do some schmoozing, then hopped on a plane back home to California early the next day.

At the next boat show I laid eyes on the new HO Team poster for the first time. There were several giant pads of posters, each with 50 copies to tear off one at a time. The pink themed poster read “HO Skis – 1988 Team.” Deena Brush-Mapple was in the upper right. Her byline read “1997 Word Overall Champion.” Cory Pickos and the Larsen Twins shared the bottom half of the poster. They were undeniably the world’s best trick skiers. I was there too, right next to Deena. It felt like I had finally arrived. The board was my design, and the other HO Team riders were the best in the world. I was right there with the same riders whose pictures I clipped out of magazines to put on the walls of my room growing up.

At the Tour Stop in Madison, WI, I sat down next to Deena to sign posters for the fans. There was a line about 50 deep. A bright-eyed kid was next in line. He told me he was a kneeboarder, and his mom and dad just bought him an Aerial 360. I asked him his name and added it to the team poster. Next, I wrote “Dare to Air!” Then I signed my name at the bottom. He gave a huge grin, and told me the poster was going up in his room. The circle was complete.