Recently retired watersports “superdealer” Tommy Phillips has been given a higher calling to create the Wakeboarding Hall of Fame (WHOF).  People everywhere are sharing photos and stories from the early days. Along the way Tommy has contacted many key people around the world to help him turn his vision into a reality. 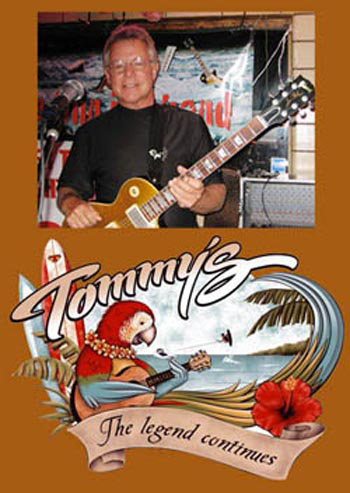 The Wakeboarding Hall of Fame started on Facebook, with  10,000+ followers in the first six months.

On January 1, 20015 WakeboardingHallofFAme.com was launched, and the Board of Directors is working on several key projects for 2015 including choosing the Inaugural Class, presenting memorabilia at Surf Expo in Orlando (Sept.), and starting the Wake Registry to honor iconic images in Wake. 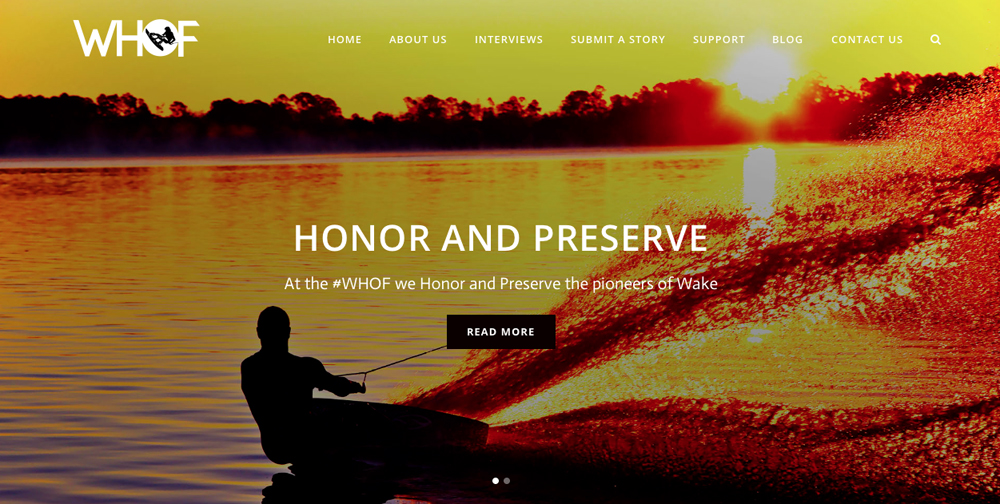 Adventures in Water Skiing: Part 3, Wakeboarding has been on hold for over a year, even though I have already written the rough outline. The basic story is in place, but the photos, videos, and references still need to be organized. I also need to interview a few more key people including Tony Finn and Jimmy Redmon.

There are several advantages to the eBook format.

Instant distribution for FREE to anyone with a computer

Links within the document, similar to this blog post (see timeline below).

Links allow for instant access to a wealth of pre-qualified info outside the book itself. How far do you want to go down the rabbit hole?

Because of the Tommy, and the Wakeboarding Hall of Fame, I am back on the research, writing, and image gathering. It has been a fun week digging up hidden gems from the past.

While Adventures will document my story in wakeboarding through 1997, it also recounts the history of the sport, within the larger context of related towed watersports. Getting the story right has been critically important to me, and I have spent thousands of hours conducting interviews, pouring over magazines, newspapers, journals, and books. From this I have created a timeline based in documentation, which will be fully available once Adventures in Water Skiing: Part 3, Wakeboarding is released.

MILESTONES RELATED TO THE HISTORY OF WAKEBOARDING

1700s: First reports of surfing developed in Polynesia and Hawaii. (Undoubtedly humans have ridden waves for thousands of years.)

1885: Gottlieb Daimler develops gas-powered motor. By the 1890s these engines are capable of 15 mph when mounted in “launches”.

1900s: Aquaplanes, the forerunner to water skiing, are first towed behind launches. In the ensuing years multiple newspapers report that surfing is the forerunner of the aquaplane.

1911-1920s: Aquaplanes gain mainstream popularity in print. Riders experiment. A Chicago company offers the boards starting in 1911, but fails because most people make their own. Competitions and exhibitions spring up around the world, most often in association with existing boating events. Hall of Fame water skier Dick Pope, Sr. aquaplanes in dozens of movie newsreels starting in 1917. 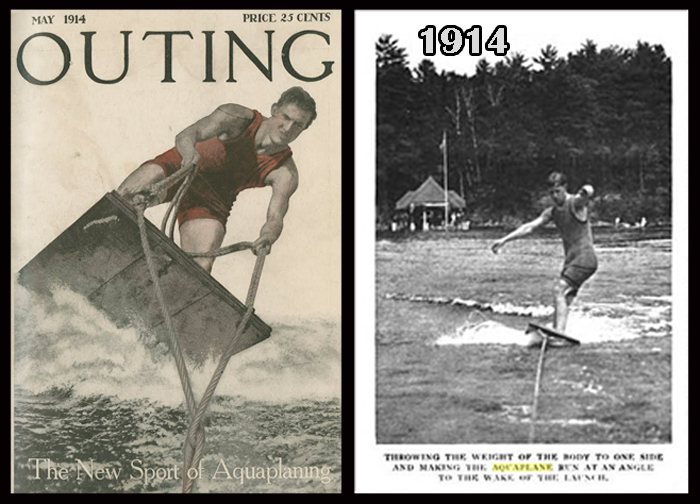 Sidestance photo (with story) from 1914, St Nicolas Magazine for Boys and Girls 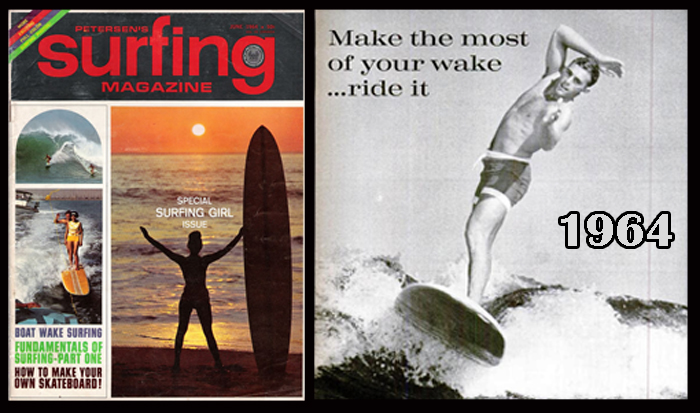 1972: Freeboarding on the bindingless Banana Board, a cross between surfing and skiing, appears on the pages of The Water Skier

“The Banana Board couples the fun, excitement, challenge and thrills of both a slalom ski and surf board.” 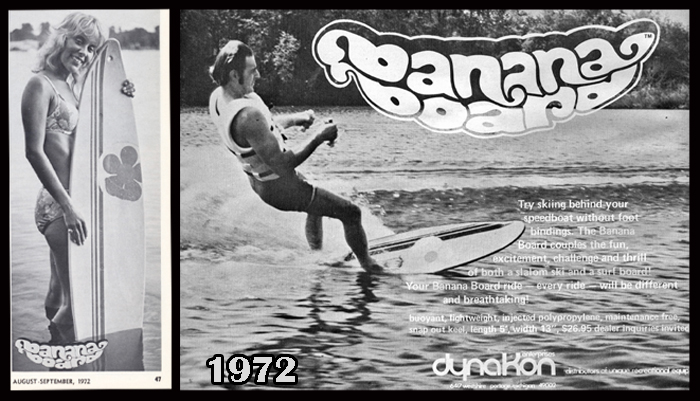 1970s (mid-late): “Skurf-boarding,” New Zealand. Allan Byrne & Kevin Jarrett hand shape narrow foam boards with a large keel fin, specifically made for riding behind a boat. They have considered bindings, but do not add them, preferring the freedom of easy foot movement. They do go on to produce a few hand shaped boards (without straps) called a “Hot Stuff Skurf-Board.” This group’s riding is the first pivotal event leading to the development of the skiboard and wakeboard. 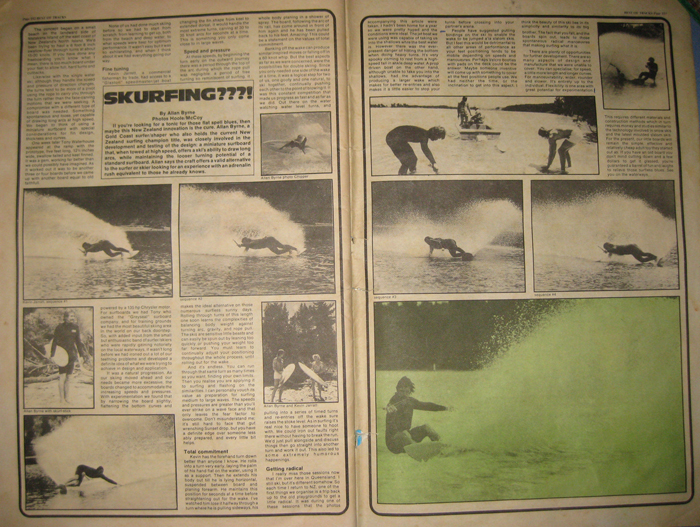 1973: John Taylor applies rotomolding to kneeboards for the first time under the brand name Glide Slide. The new process is key to mass production for both the kneeboard and eventually the skiboard. Taylor sells the company to Danny Churchill in 1974, who rebrands it as Hydroslide and popularizes the sport. 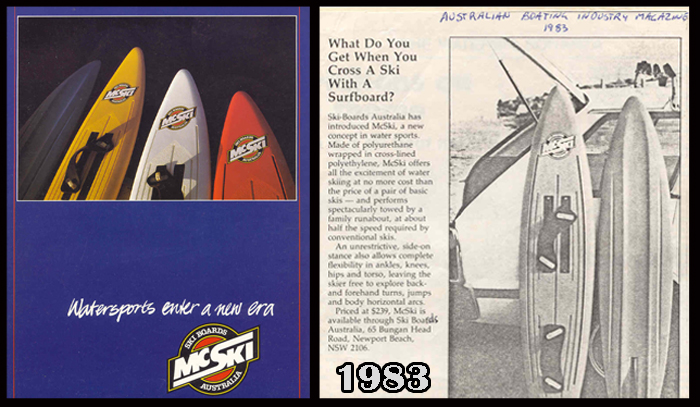 1984: USA. McKee’s skiboard is licensed to Wellington Puritan for US distribution. The new board is called the “Surf Ski” and is first displayed in October 1984 at the IMTEC boat show in Chicago. 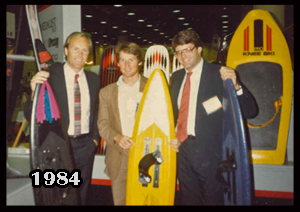 The first Skurfer Ads in 1996. Tony Finn on the left, and co-founder John Hamilton on the Right. 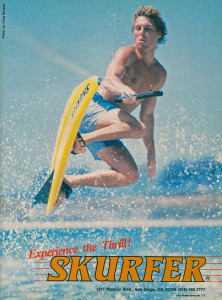 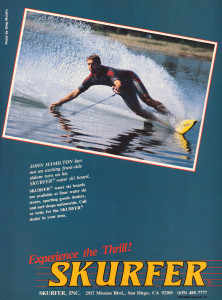 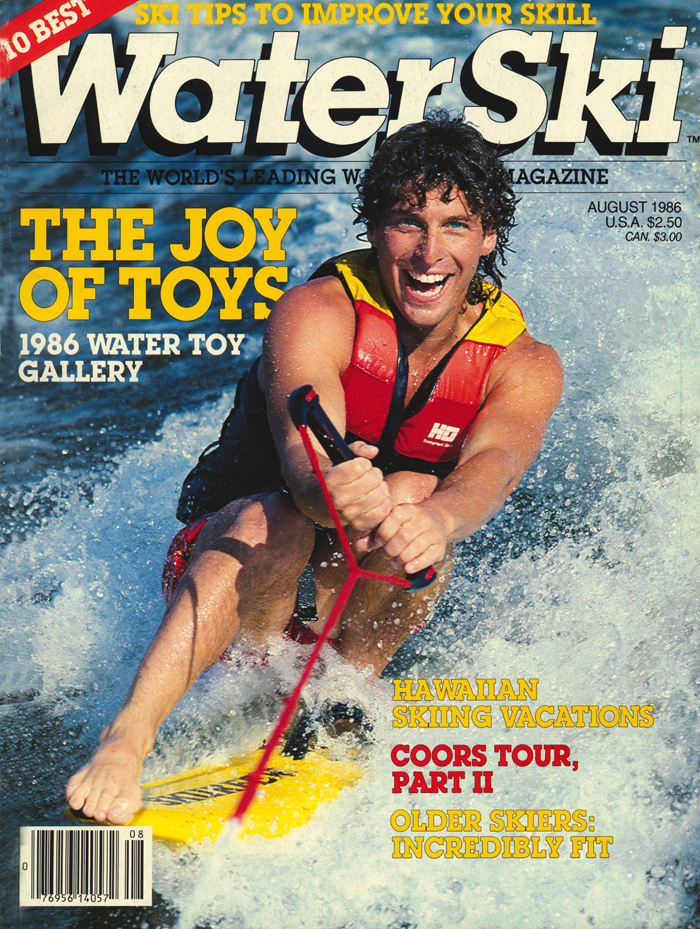 May, 1986. Tony Finn, in the first US instructional article, gives the new stand up board sport a name that sticks (for a while)…“skiboarding.” 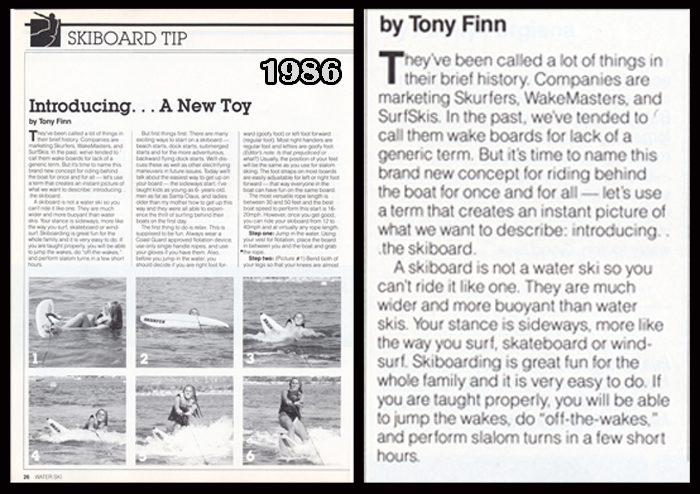 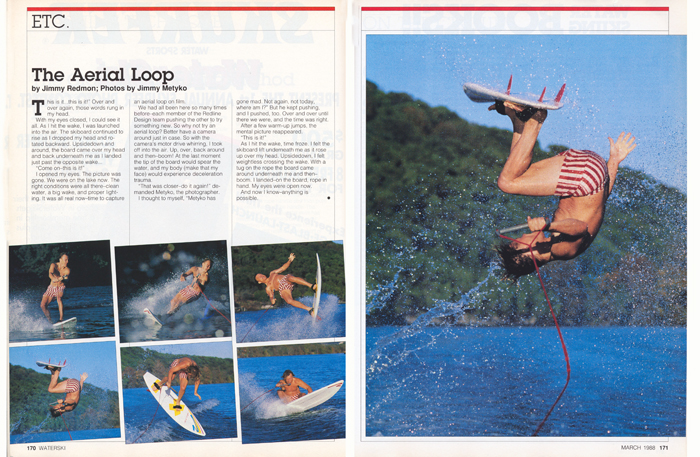 1980s (mid-late): Skiboarding makes slow but steady gains in popularity due in large part to Finn’s promotion. Several manufacturers produce boards, but skiboarding is still considered a water toy by the general public.

Kneeboarding is the hottest thing on water, with the development of dozens of high flying flips and tricks, national competitions, and the first pro riders. It is a template for skiboarding that will follow the same pattern about a six years later.

1990: Eric Perez wins the first “Skurfer Skiboard World Championships” on the Wailua River in Hawaii. The event is televised on ESPN. 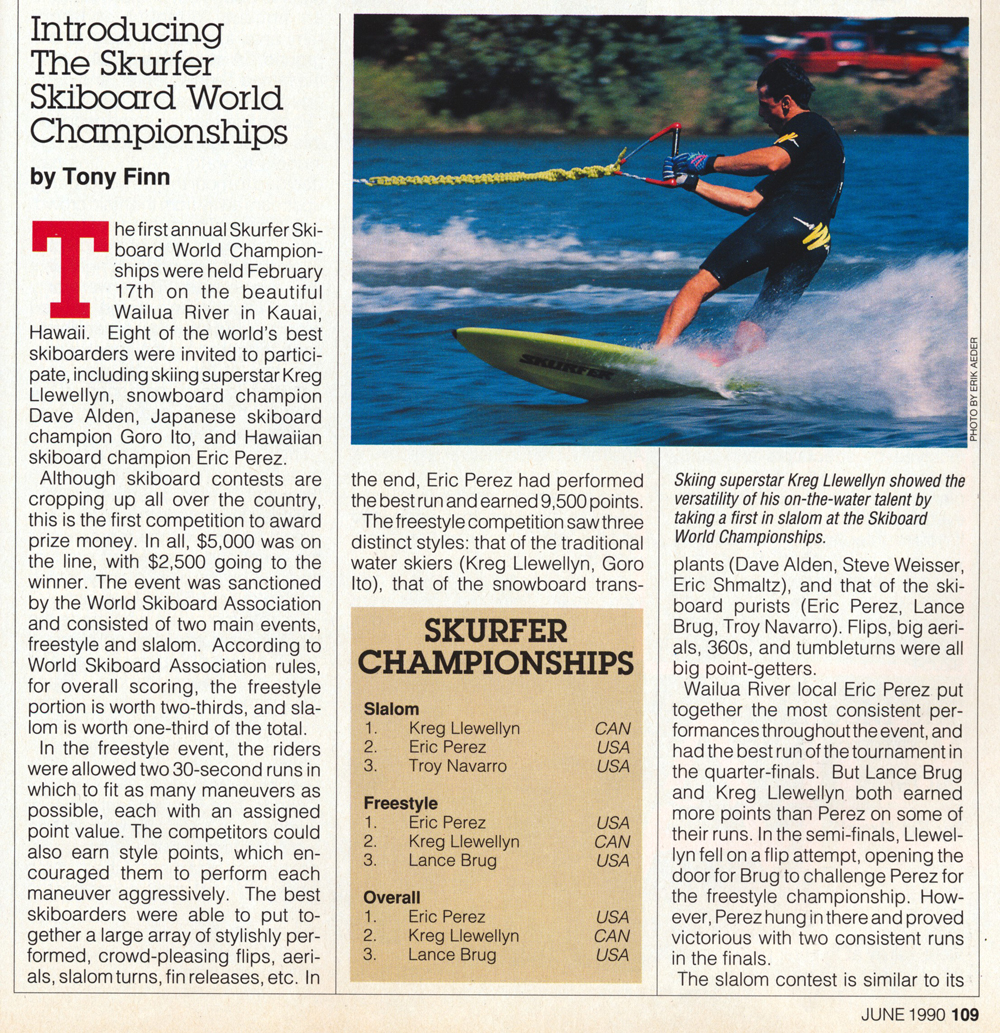 1991: Herb O’Brien of HO Sports introduces the world’s first compression molded board, the Hyperlite. The “neutral” flotation of the board overcomes the major difficulty for most riders: deepwater starts. HO brands its new board at “Wakeboarding Defined”. Over the next couple of years the new name sticks in reference to the thinner boards. 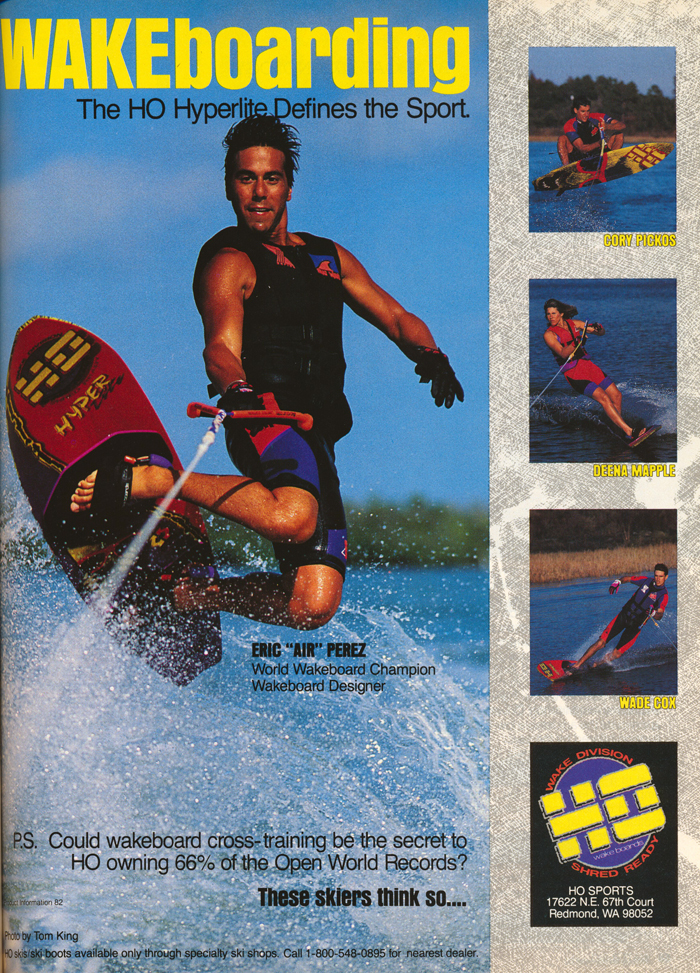 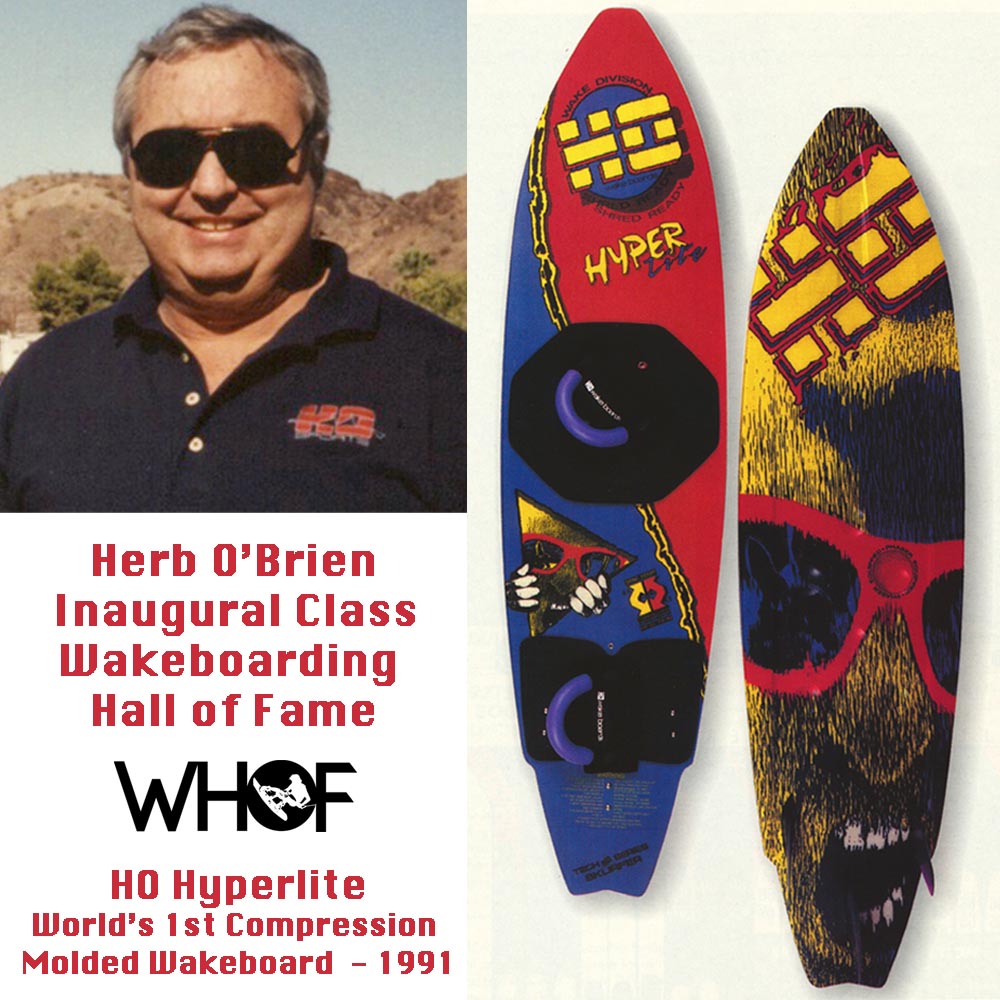 1992: After a few years of kneeboarding competitions on the Water Ski Pro Tour, stand up boarding is added and the event becomes the “Bud Kneeboard / Skiboard Series”

1992: Darin Shapiro launches the first Air Raley. It becomes an iconic move the sport, named after his coach Chet Raley (History of the Air Raley). Shapiro’s wins the Worlds in 1992, with a score more than double of the next closest competitor. He becomes the dominant force in new tricks and competitive riding through the end of the century. 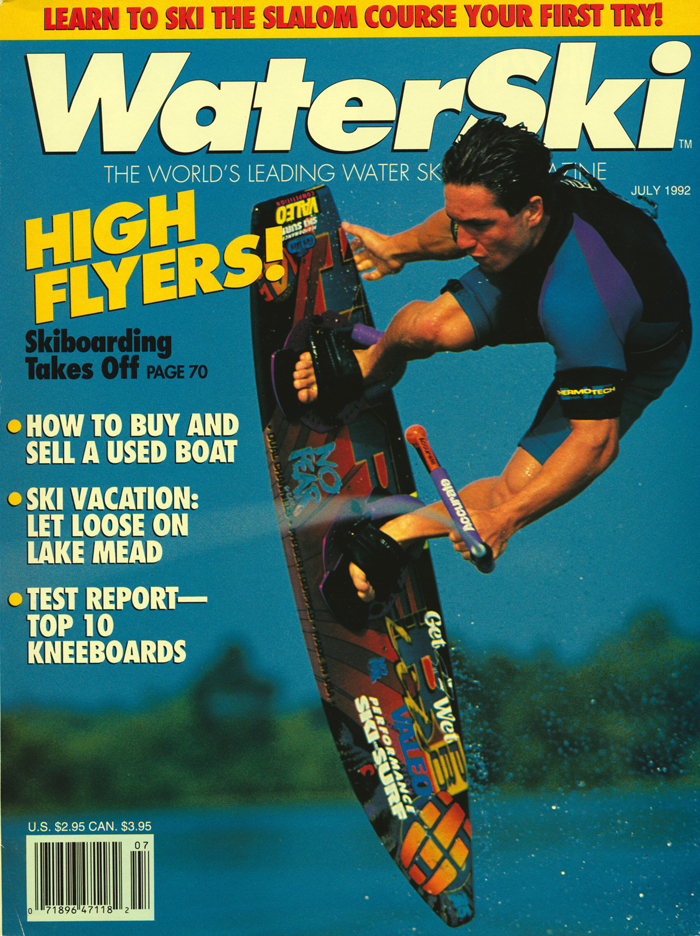 Wake Boarding Magazine (the WORD in skiboarding and kneeboarding) launches. It quickly becomes huge hit. Only the first couple of years feature kneeboarding. The meteoric rise of the stand up boarders signifies the decline of kneeboarding and the symbolic the passing of the torch. (Even this photo is a nice representation of wakeboarding soaring as it overtakes kneeboarding). 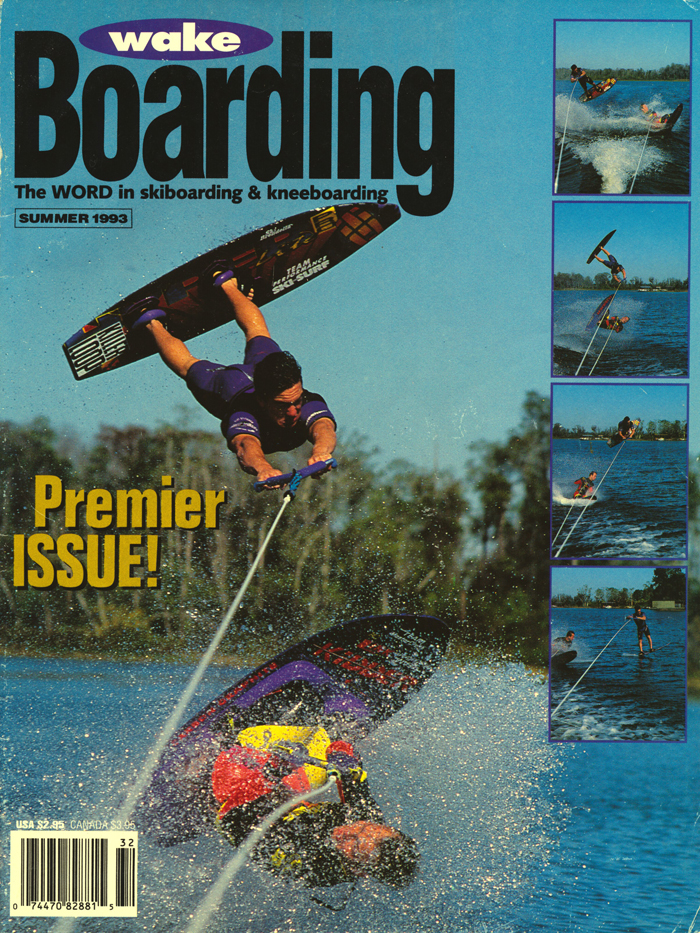 1993: Finn and Redmon (and Chris Durham) join forces at Wake Tech. Their unique combination of skill in promotions and board design give Hyperlite a legitimate challenge.  Scott Byerly and Gator rise to prominence with a new freeriding style in Wake Tech’s “Gravity Sucks” video. 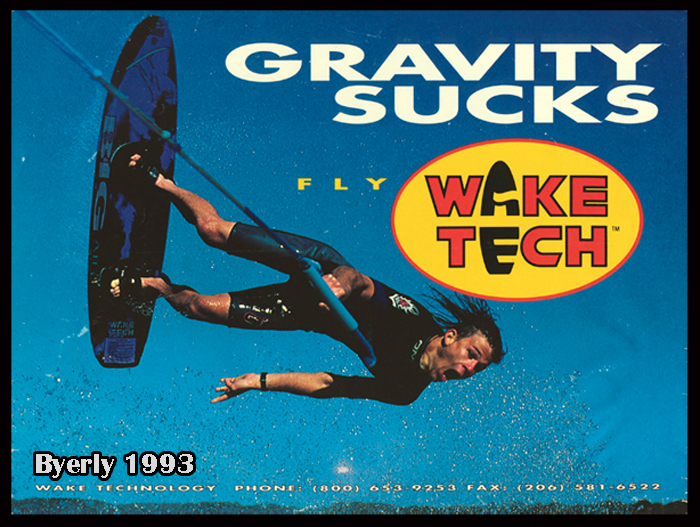 1993: Other noted freestyle riders and pioneers in the sport (who brought influences from other board sports) include Greg Nelson, Josh Smith, Scott Harwood, Pat McElhinney, Lance Brug, Troy Navaro, Eric Schmaltz, Todd Weatherill, and many more.

1994: Wake Tech,  introduces the innovative “Flight 69” twin board, shaped by Jimmy Redmon. It is ready just in time for the 1994 Worlds at Islamorada, FL. Byerly and Gator use the new board to place 1st and 2nd at the event while demonstrating an entirely new way to approach wakeboarding – switch.

1990s (mid): Several manufacturers start building ballast systems directly into their boats. Most of the early systems are take too long to fill/empty and are difficult to use. Even so, it is clear that bigger and bigger wakes are the new wave.

1990s (mid to late): The watersports industry is dominated by wakeboarding. Pro riders like Shaun Murray, Dean Lavelle, Zane Schwenk, Shannon Best, and Andrea Gaytan, and a handful of others make a living as professional riders. Board manufacturers and independent producers make instructional and lifestyle videos documenting the exploits of riders around the world.

1997: Correct Craft introduces the “Flight Tower” on its Air Nautique; the first commercially available tower. Riders have been using preexisting towers on fishing boats to tie high since at least 1989 for photo and video shoots, but Correct Craft secures the patents and licenses all other manufacturers.

All these dates have been cross-referenced by scores of print stories, numerous interviews with key people, and my personal experiences with a front row seat to most of the early developments from 1979-1997 (the year I stopped competitive wakeboarding, and quit my full-time employment with HO-Hyperlite).

The complete list of references will be released with Adventures in Water Skiing: Part 3, Wakeboarding.

If you have a different view, or have something to add to the conversation, I would love to hear from you. I am in need of several back issues of Wakeboarding Mag, and need access to some of the early classic videos. Drop me a line at ironmanskier at gmail dot com.

I would appreciate a credit and/or link to this post if you use anything here in whole or part. This has literally taken hundreds of hours to accumulate!