History of the Layout (AKA Air Raley): From 18 Interviews with the Key Players

History of the Layout (AKA Air Raley)

Jump! Let your feet fly back in an act of faith. Tug on the handle to ride it out. It’s commonly known as an Air Raley, but the generic term for this gravity-defying trick is the Layout. Versions of it have been performed for decades on just about everything. Here’s an inside look at the innovative men who developed a new way to fly.

Distance jumping was already an established discipline, and every so often a high-flyer pulled back from the edge of disaster after slipping out on the ramp. The move of self-preservation evolved at Cypress Gardens with Mike and Joker Osborn. Joker pushed furthest, purposely using centrifugal force and a one handed flight to let his skis drift behind him as part of the show. The recovery from what looked like a sure crash was always a crowd favorite. 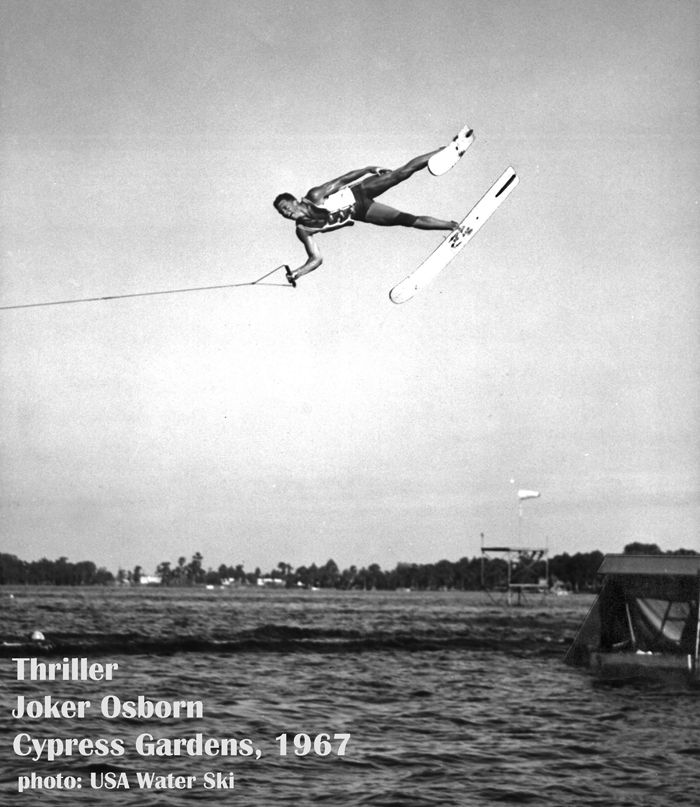 Steve Fontaine was not the first to lay out around the corner of a cable skiway, but as an established show skier he was the one to popularize it. After he saw the Ski Rixen manager perform the move at an exhibition, Fontaine set out to take the trick to new heights, adding massive air and even multiple overhead spins. The move consisted of Fontaine cutting hard to the outside as the rope hooked to the cable above turned the corner. He hung on tight, and the centrifugal force whipped him up and around on a giant arc, often 15-20′ high. Fontaine says that Darin Shapiro got his first taste of the layout here too, as a kid riding on Steve’s back. 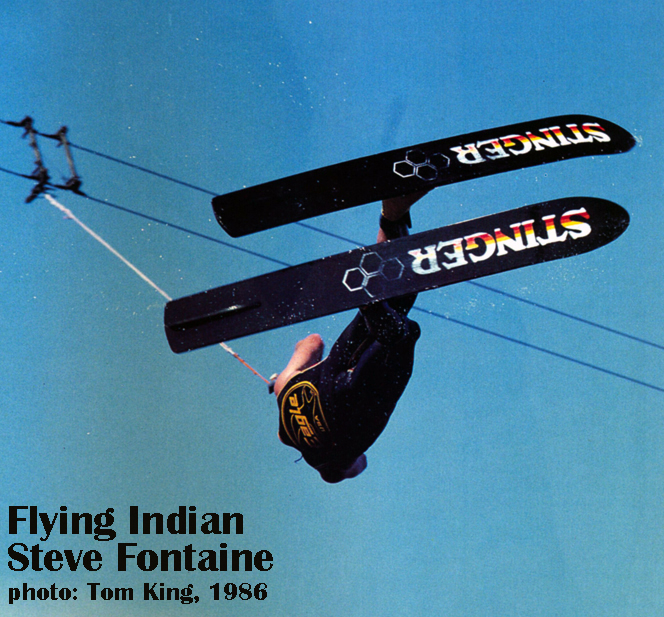 Skiers and kneeboarders were performing “Flying Indians” at the Pompano Beach Ski Rixen, so the next step was to take it behind the boat. The boarder to make the jump was Lance “Sky” Walker, who grabbed attention with a high-flying move he called the “Layout.” It was the glory days of kneeboarding, and his groundbreaking trick spread like wildfire. 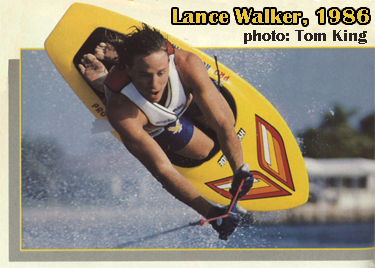 In the late 1980s Mike Seipel became a barefoot jump specialist. He discovered that he jumped further when he got his weight forward on the takeoff. Seipel pushed his luck till he went out the front at over 43 mph, but the crash was a revelation. He realized that he might have been able to recover and ride it out; if he was ready for it. Over the next few months, when he accidentally lost it out the front, he would fight to regain control and pull his feet beneath him. Each attempt brought new confidence and he made his first inverted jump after five face first falls.

Seipel’s new jumping style catapulted him to a new world record of 72, By 1993 had extended it to 87′. Today all the top competitors emulate Seipel’s inverted style. 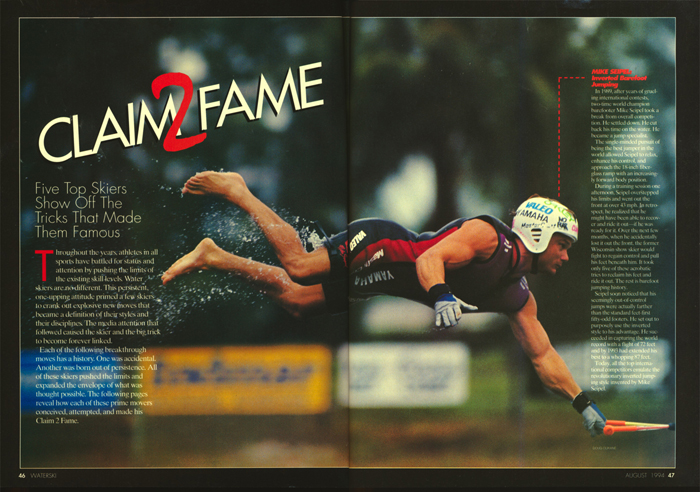 Darin Shapiro was an accomplished trick skier in the early 1990s, and he mastered the Flying Indian on the cable. His coach Chet Raley suggested he try it on a wakeboard behind the boat. The transition was easy, and Darin called it the Air Raley to honor his coach.

Darin Shapiro exploded on the scene with this, his first Air Raley in print. Also in this picture, right side inset shot is Paul Frasier. He is commonly given credit for attaching the term “wakeboarding” to the world’s first compression molded board by Hyperlite introduced in 1991. 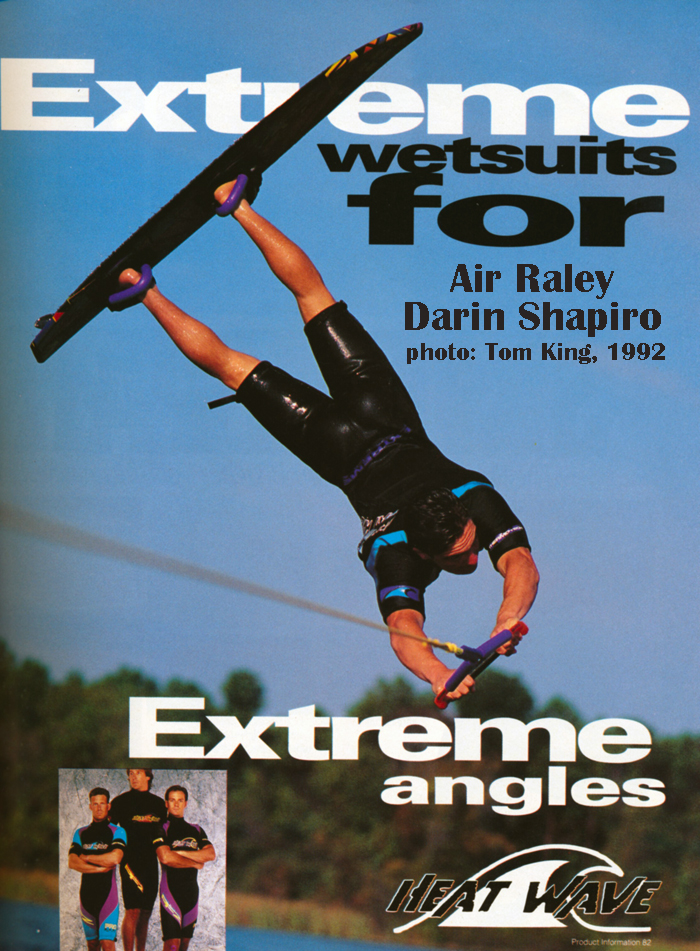 The longstanding quest for an Air Raley on a hydrofoil was achieved by accident. Kevin Thayer was working on an overhead mobius when fellow foiler Bryan Steele discovered the move had morphed into something like a Raley. The insight led Thayer to tweak the move into a full-fledged layout.

My longtime friend and recently “retired” superdealer Tommy Phillips is taking on a new role. He is spearheading the push to create a Wakeboarding Hall of Fame…and he has big plans. This post is at his request.

If you enjoyed this post I would appreciate a share to your favorite social media sites. Easy share buttons above and below post. Your support is a huge motivation to keep on posting quality stories. Thanks! TK

More than a dozen interviews and numerous cross references via magazines and videos went into this story. If you have anything to add, or have a different version of the events, please contact me: ironmanskier at gmail dot com