The first Fly-In was coming up soon, and I wanted to be ready with even more new tricks. Next on my list was a gainer in the flats. Mike claimed this trick first, but all of the attempts that I saw him do were something shy of a true gainer. His was more of a hybrid between a side over side back roll and an end-over-end true back flip. Watching Mike try his “gainers” out wide gave me the idea to try a back roll out wide in the flats too. It opened the door to the concept of changing the look and feel of a single trick by performing it in all possible positions behind the boat. The beautiful thing about the sit down foil is that it’s possible to do most tricks anywhere behind the boat. 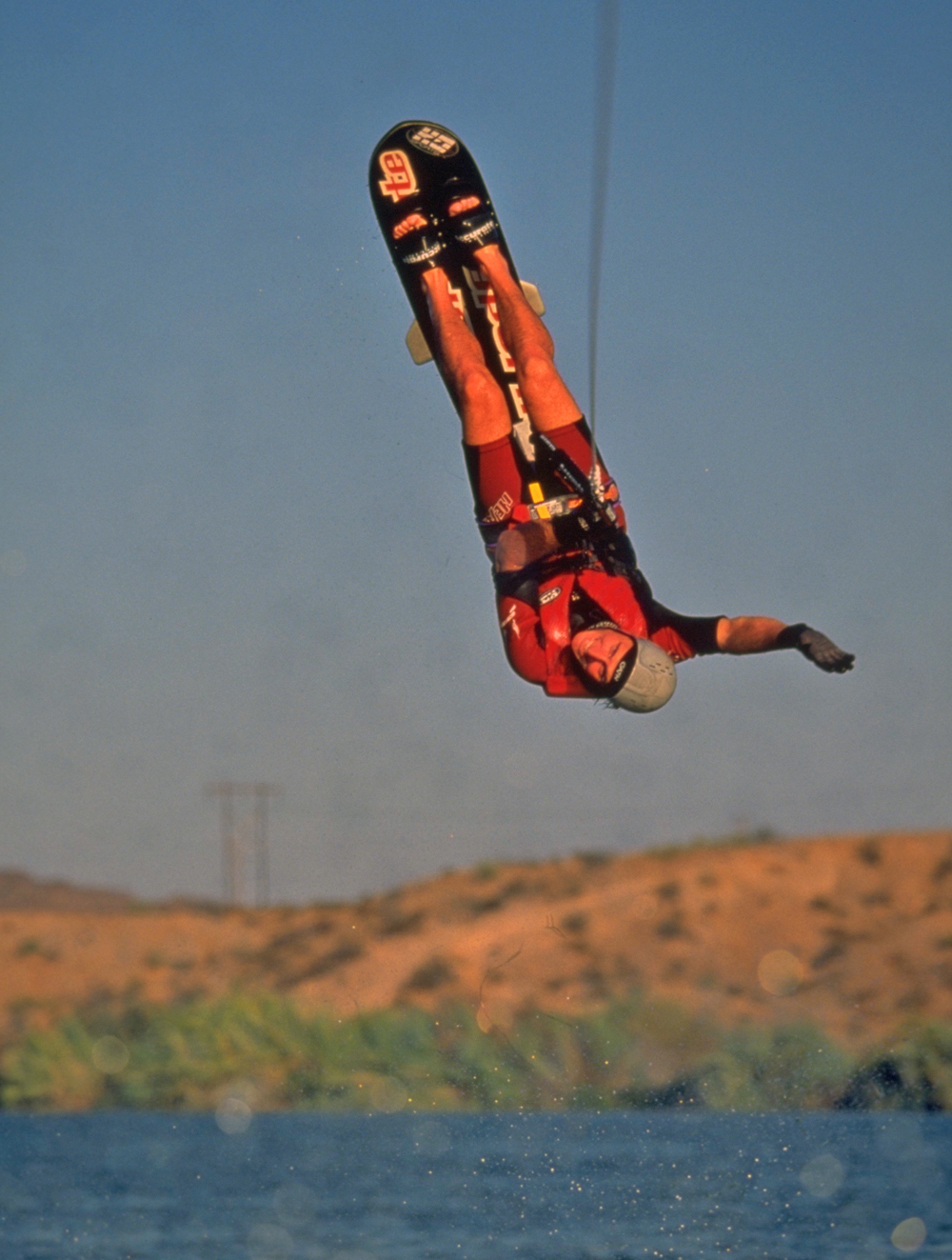 Performing a big back roll out wide in the flats (Doyle, 1996)

The first step to learning the air gainer was the gainer dismount. Like most everyone else at the time I learned these at the wake. I just cut in at medium speed, let go of the handle, and threw a back flip. With my background in freestyle jumping those were easy enough, so the next step was to take it out wide in the flats. I approached it just like the real move, but tossed the handle when it came time to do the gainer. I made endless attempts at the River with Mike Mack driving. It was a home water advantage because the first Fly-In was just weeks away at his ski school and hotel. 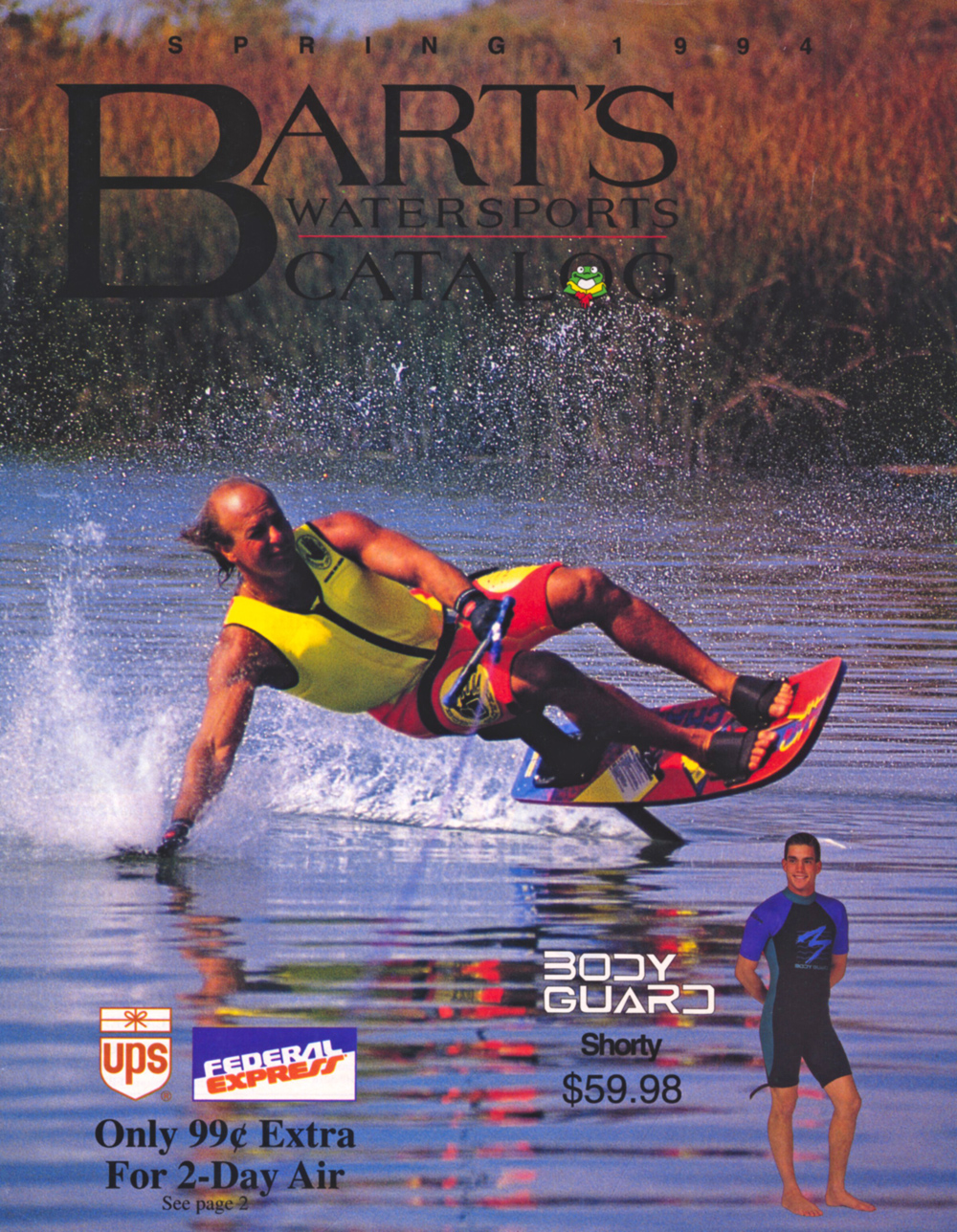 Mike Mack scored the Bart’s cover with his power turn on the foil. Spring, 1994

I was ready to hang on to the rope, and we figured the easiest way was to do the exact same set up, then chop the throttle, just like my slalom ski front flips. That took the tension out of the line, and the move felt just like a gainer dismount without the rope. I landed and caught my balance, then Mack powered up slowly. It was a bit of a gimmick, but I always developed new moves with a step-by-step approach. Over the course of a week I figured out the timing and line tension to make the trick without a back off. I was ready for the Fly-In. 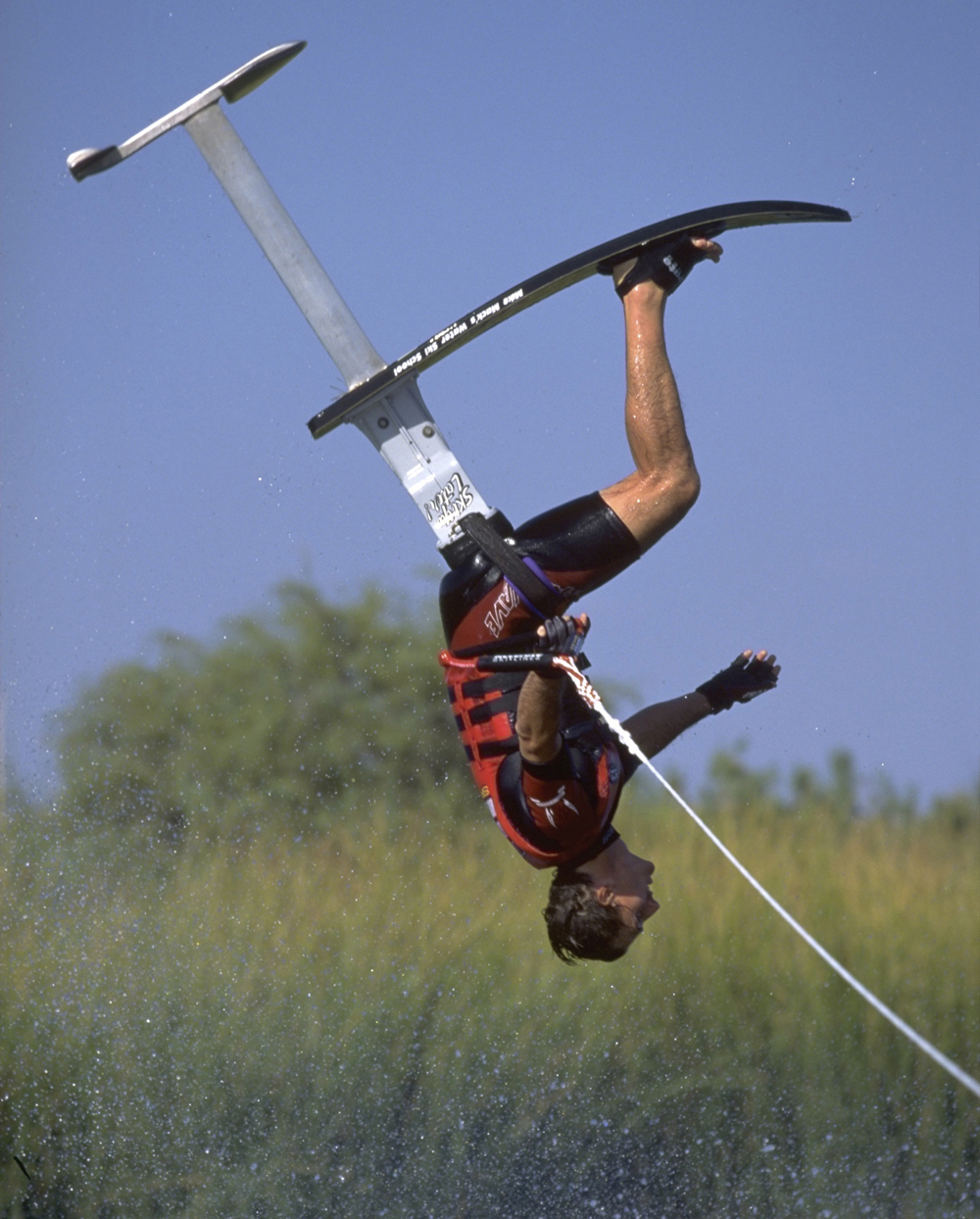 Practicing the Gainer for the first Fly-In. (Doyle, 1994)

The first Fly-In was the brainchild of Mike Murphy. The first seeds were planted when three guys in business suits showed up at the Air Chair booth during a boat show. Mike says they looked a bit out of place, but each one plunked down cash to buy an Air Chair. One of the men was Dave Murphy, a big shot at General Mills. Dave and his skiing buddies asked Mike to come to Wisconsin to hang out and give them lessons. In those days Mike criss-crossed the nation to promote the sport, and this trip was right up his alley. Mike went from cabin to cabin on the secluded lake, giving lessons and demos to more than a dozen people. It was a fun weekend of friends and riding, and Mike went back three years in a row, each time with more riders joining in. Dave Murphy was so thankful that he presented Mike with his own Wheaties box created by hand in the General Mills art department. It was the real deal, with a picture of Mike jumping the Chair and the headline, “Mike Murphy, Wheaties Champion!” 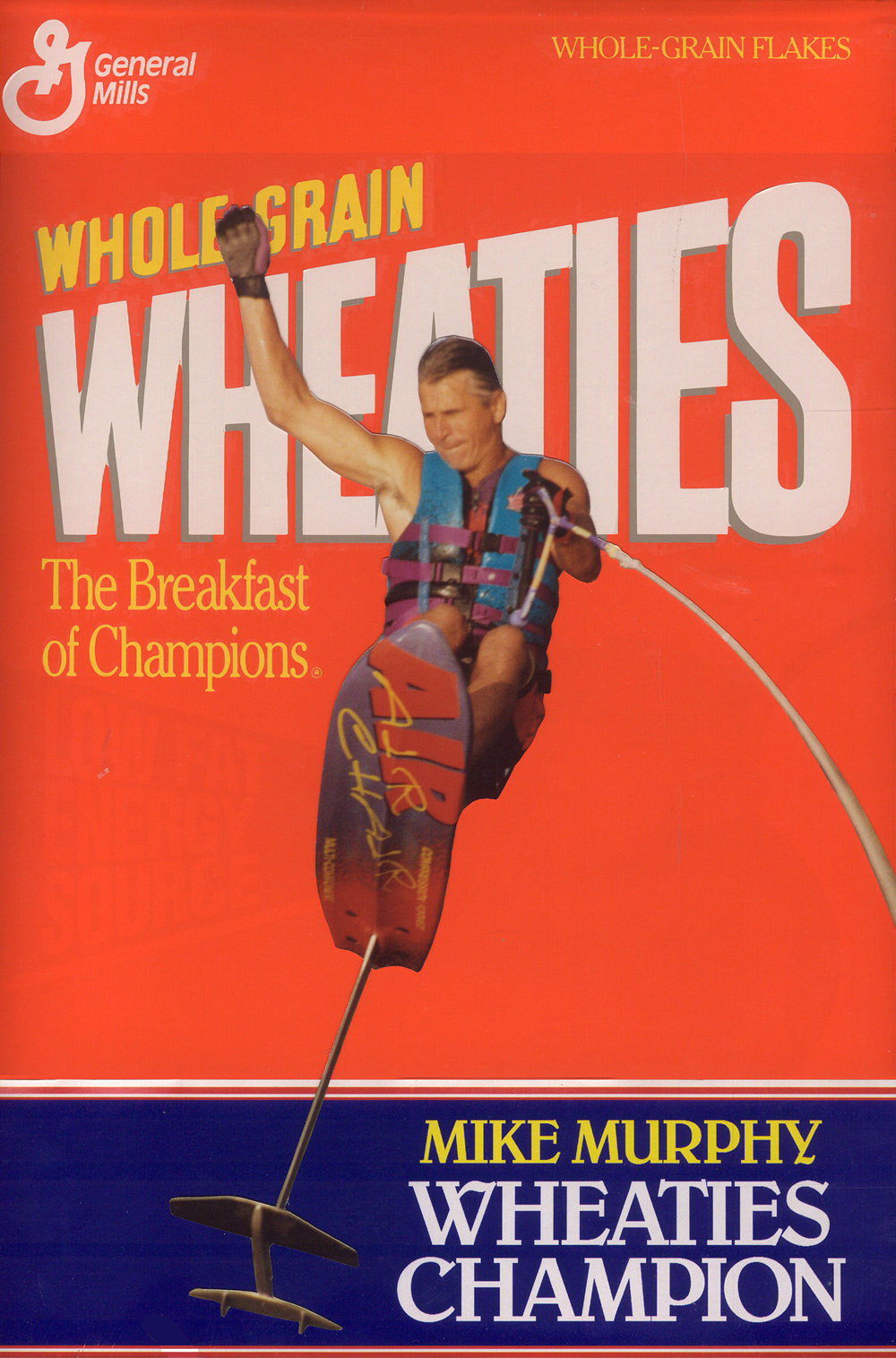 A present to Mike from a big shot a General Mills. He has an actual box encased in plastic. (1995)

The Wisconsin get-togethers were just the type of gathering that Mike enjoyed. It wasn’t like a tournament where competitors sat around all weekend to get in one or two rides. This was a stress free way to enjoy time with the whole family and get in plenty of riding. He decided to call his new concept for promoting hydrofoiling a “Fly-In”, piggybacking the name used by the gatherings for airplane aficionados.

In the fall of 1994 Air Chair junkies from across the nation trekked through the desert to gather for flight on the Parker Strip of the Colorado River for the first official Fly-In.[i] It was also the first gathering of the world’s best riders, just a part of the diverse group numbering over 50. People exchanged their foiling experiences to improve themselves and expand the sport, all while enjoying the deluxe accommodations at Mike Mack’s ski school and hotel. Excitement was in the air. Everyone felt the cutting edge of a developing extreme sport. The all Air Chair ski show set the pace. It featured the red-hot new moves like Dean Lavelle’s laid out rolls, Mike’s submarine, and my air gainer. In the show and beyond, just seeing someone’s style or “new to you” tricks lifted many Air Heads to new heights.

The free ride sessions organized by Bob and Jan Woolley at Air Chair put everyone on the water, with equipment and instruction provided. The kids jumped to it and inspired everyone. One twelve year old from Wisconsin was well on his way to gainer landings. The future of the sport had never looked brighter.

My good friend Peter Nelson, the show ski director at Sea World of San Diego, came with his family and many of his performers. Nello’s featured ride was with Bob “Crash” Dunham on a hydrofoil built for two. Bob made an aluminum bracket that connected two Air Chairs together at the base of the seat tower about two feet apart. It was hilarious to watch two grown men try to coordinate who was going to lead. Eventually they figured it out and were even able to jump the unwieldy rig. 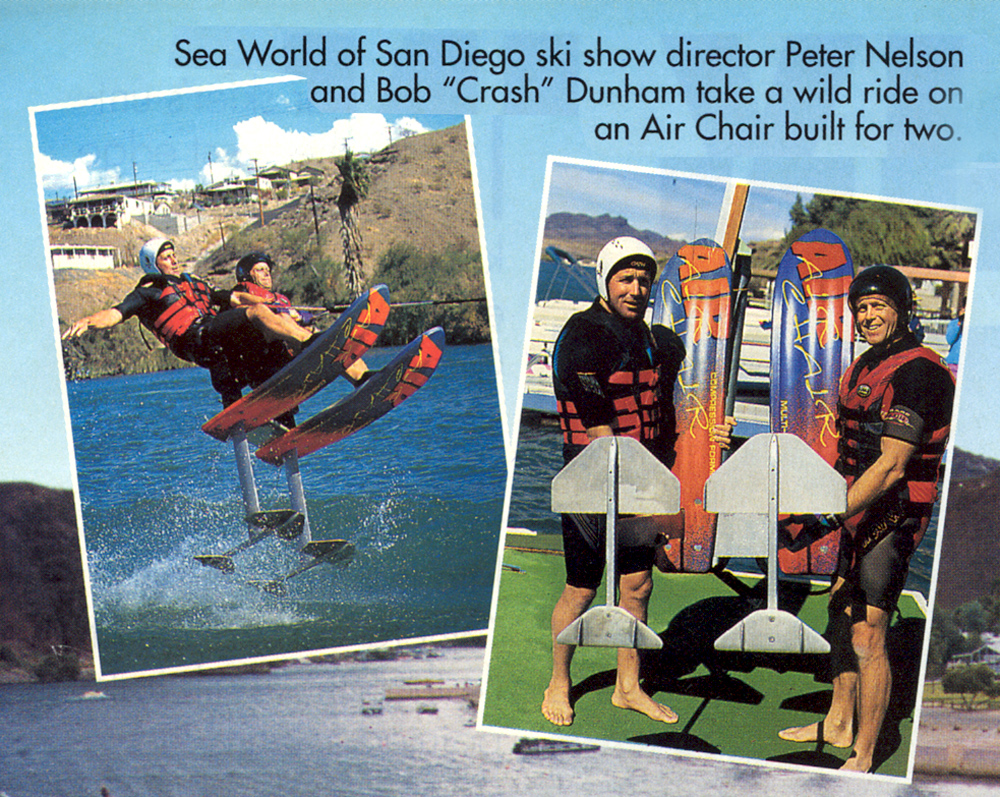 Mike also brought a foil with a five-foot strut. It was wild to ride; you just kept going up and up. I never pushed it high enough to pop the blades out of the water, but those who did rode the elevator down for a crash landing at the bottom.

Riding a hydrofoil in the early days was show time at its best. I can’t say how many times I made a flip to show off for a boat going in the opposite direction. They would whoop and holler, and often turn the boat around for a closer look. It was not uncommon to get two or three boats following us for miles as we flipped up and down the River. One time a boat lost their skier, but they were so mesmerized by the foiling that they went another mile before realizing their rider was down! The unadulterated attention went on for at least a couple of years in the early days. People were excited to see something new, and flips on the Air Chair were still a novelty.

Participants came from all over the country. Dan Corey made the journey from Texas. Dan was one of the earliest promoters of the sport, and did a lot to help hydrofoiling go from water skiing oddity to mainstream ride. He always talked about this crazy turntable with lights he built at his home to proudly display his tricked out and highly polished foil. That’s dedication.

Even Herb O’Brien of HO Sports made the trip down from the Seattle area with his wife Pam. HO Sports still pressed the Air Chair decks (Jake Kinnison as operator), and Mack had just designed the Vertical Air. 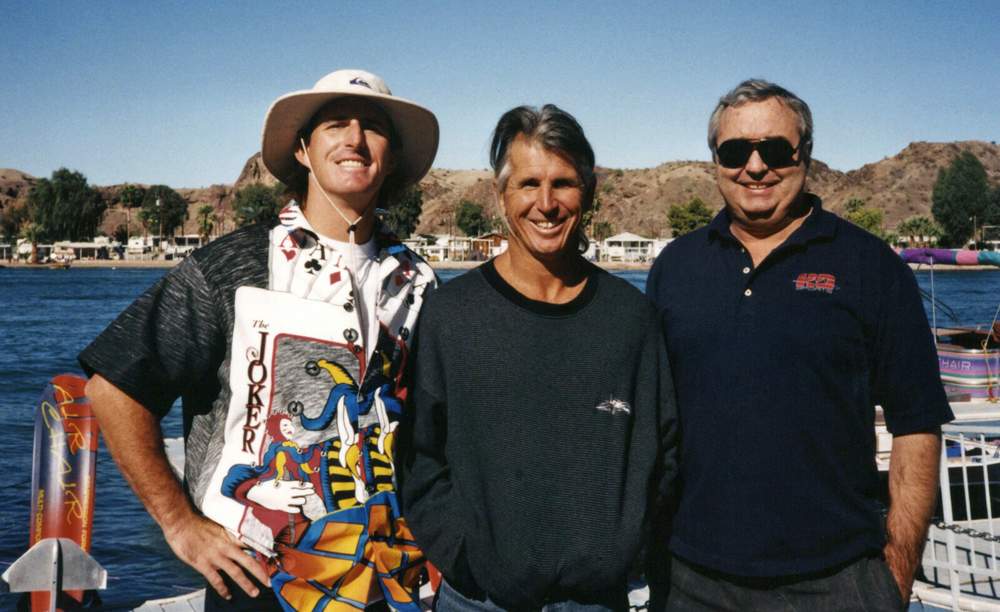 Hanging with Herb and uncle Mike at the first Fly-In.

On Sunday at the Fly-In it was time for the dam run from Mack’s place. Dozens of people loaded up into a flotilla of boats and we all flipped and ripped our way upriver for 10 miles to the dam. When someone got tired, another rider took their place. It reminded me of salmon swimming their way back up their home river. The River was, after all, the birthplace of the sit down foil. When we reached the dam, all the boats joined together to float for a while and enjoy the moment. Instead of spawning it was a few cool drinks.

Dean Lavelle, uncle Mike, and I repeated the triple flip action for Rick Doyle, who was covering the event for a four-page feature story in Water Ski. I also took a ride with uncle Mike and grandma Murphy; three generations foiling side by side. That was amazing! 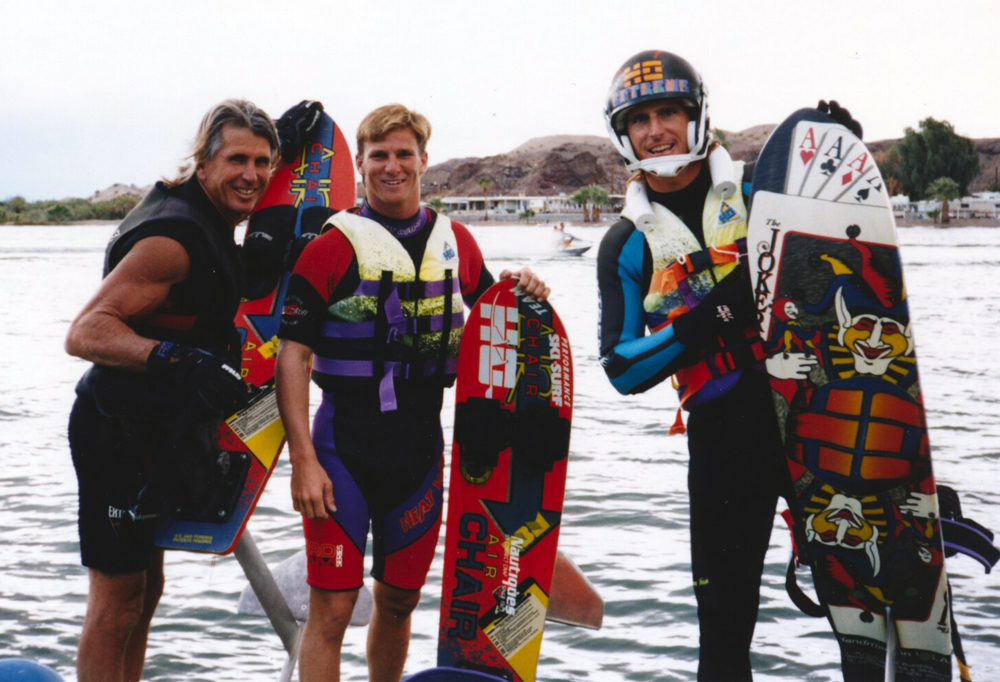 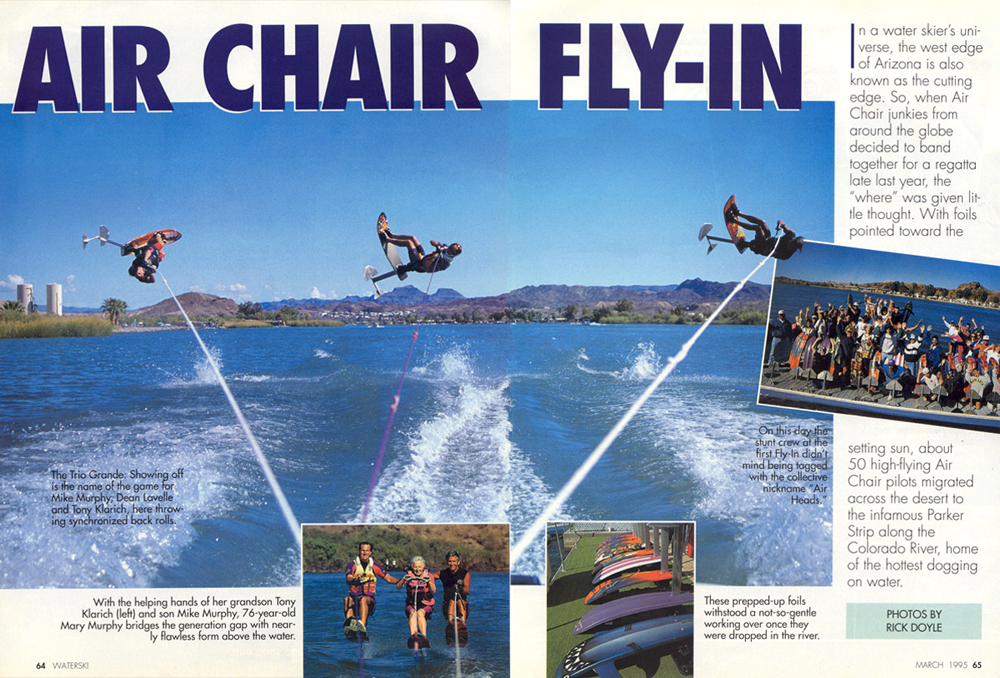 The First Fly-In got big coverage in WaterSki Magazine. Above: Triple flip with Lavelle, Klarich and Murphy. Below: 3 generations with grandma and uncle Mike. (Doyle, 1995)

Throughout the weekend Dean Lavelle and I had a friendly battle to see who would be the first to ride out a combo roll. I was already making combo rolls on a kneeboard, so it made sense that it could also be done on a foil. “Do it all Dean” rode just about everything too, and with plenty of experience as a kneeboarder, freestyle jumper, wakeboarder, and foiler, we were neck and neck down the stretch to claim first honors.

The combo roll on a kneeboard required a bounce, and at first blush that did not seem like the way to go on the foil. For anyone who has ever tried rolls or gainers on a hydrofoil, they know that if you under rotate an invert, it is easy to get thrown up into another flip without even trying. We used this concept to purposely throw a second back roll. Both of us were ever so close on Friday and Saturday. On Sunday morning after the all Air Chair ski show in front of Mack’s place, I landed my first one.[ii] Dean, always the good sport, gave me hearty congratulations. Then he vowed to be the first one to make a triple. True to his word he called me a few weeks later to let me know he had made both the double and triple. In an ever-changing world of a fledgling sport, the moments of being the only one doing a trick are fleeting. Often times the hardest part of a trick is just imagining it. Once someone sees it, they can often do it too.

In a single weekend Dean and I had developed the swoop style for combos. That is where the blade goes into the water at a downward angle and swoops through to the next move. The breakthrough was much bigger than just a single trick; it was an entirely new way to ride that opened the door to dozens of new moves. I knew that someday riders would be putting together combo tricks to do moves we couldn’t even dream of. And they did.

>Next Chapter: Love to Crash

Mike brought a five foot tall foil to the first Fly-In, and since then things keep growing!