In the early days of foiling it was up to the riders to improve performance. Many of the changes came in an attempt overcome the limitations of the stock Air Chair, and some were born to avoid injury.

Modifications to the foil were the most important thing riders could do to upgrade an Air Chair in the early days. The foils on the early Air Chairs were powder coated to cover blems and inconsistencies in the cast aluminum foils. Inevitably the thick black powder coating chipped and peeled. The irregular surface caused the foil to glitch. A glitch was when you were in perfect control, and the foil twitched and turned unexpectedly. That was never any fun! 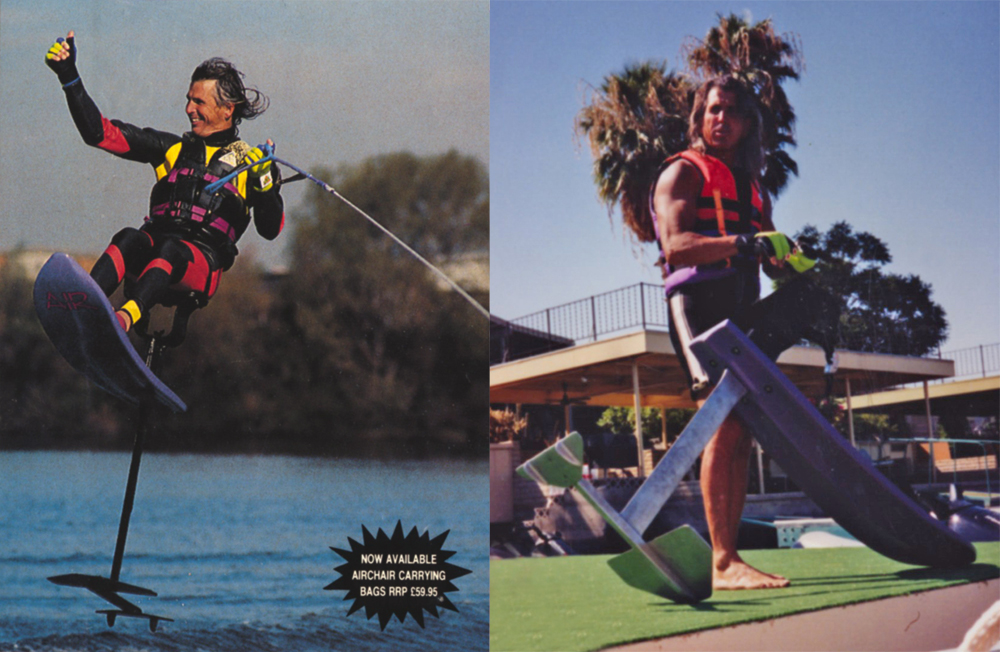 The original Air Chair foil was powder-coated, but it wasn’t long before riders started removing the thick black coating for better performance (1989-90)

The first remedy to reduce glitching was to strip the powder coating to improve the consistency of the foil. That took care of a lot of the glitches, but there was still much to be done to improve the foil performance. That involved reshaping the foil itself. Foil tuning with rasps, files, sandpaper, and Mother’s polish became the next step in the evolution.[i] Tuning was focused on streamlining the foil to decrease drag. The early foil design of the Air Chair was all right for beginners, but any serious rider who rode on a tuned foil was instantly sold on it. Mike Mack was best known for his tuning. His experience in shaping surfboards carried over into filing the foils to get them just right. I fell in love with Mack’s tuning, and he did all my foils for years. Others who became expert tuners included Chris O at the River and Mike Murphy. 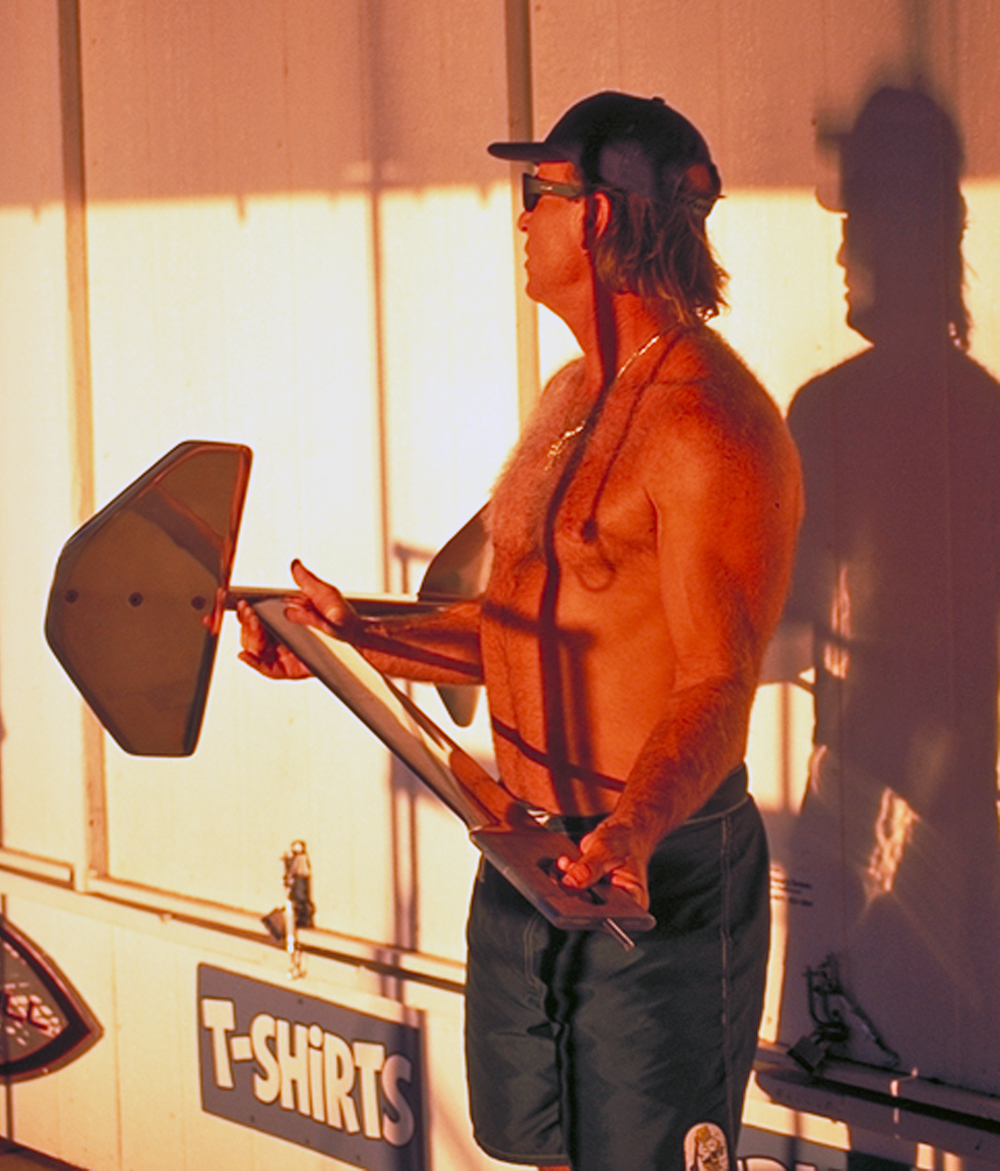 Mike Mack used his background in surfboard shaping to become one of the top foil tuners. (Klarich, 1996)

The Farmer brothers were another pair of early innovators in foil design. Bruce and Wayne Rexwinkle farmed near the Parker Strip, and rode foils for fun. They had a machine shop in their barn, and came up with numerous modifications. They were the first ones to figure out that the rear wind should fly right side up, and what a difference that made![ii] Skidders were much easier, and jumps felt loose and free. They also created several new front wing designs with various sizes and edges. They added winglets for stabilization, just like on an airplane. They experimented with shims to adjust the angle of attack on the front and rear wings. All their tinkering resulted in some of the best riding foils to date, and at age 58 Wayne used his custom ride to become one of the oldest riders to land a backside roll. 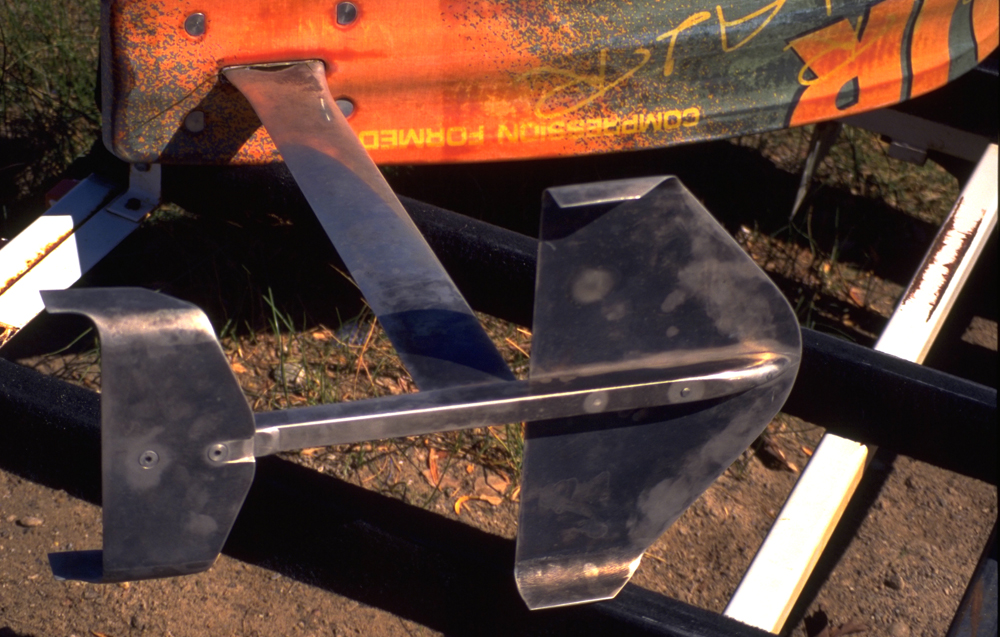 Farmer’s Brothers innovations: Shims, a rear wing that flew right side up, and winglets. (Klarich, 1997) 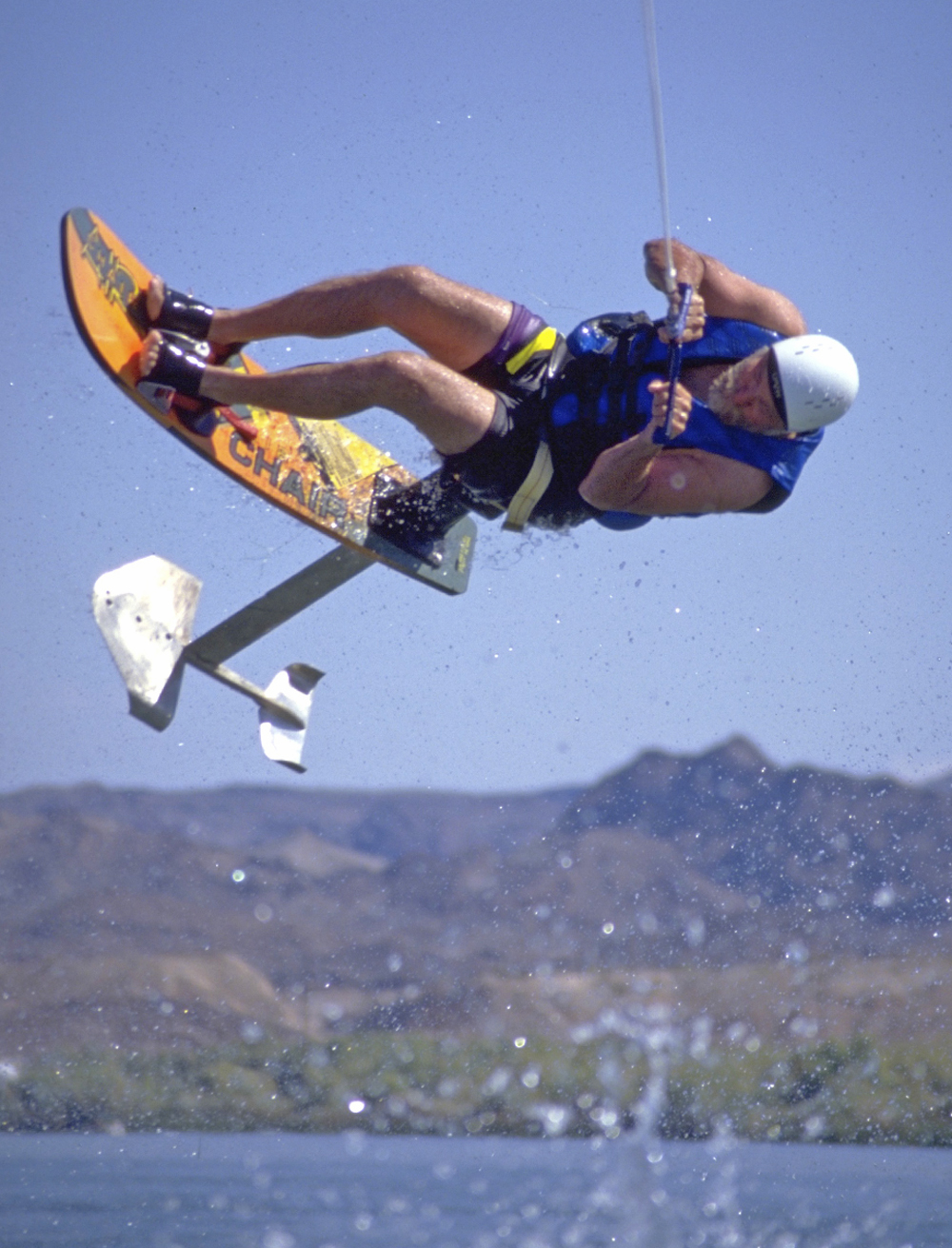 Wayne at 58 throwing a back roll on his custom designed foil. (Klarich, 1997)

The Farmers designed custom shims to fine-tune their rides, but Mike went low tech by using a dime. We usually used a coin between the fuselage and wings to tweak the amount of lift. Shimming created the perfect feel for individual riding styles. Mike sold hardware kits that included a dime to use as a shim, and a sheet that explained how it worked.

Through bolting the foil to the seat tower was another alteration that made a huge difference in performance. I followed Mack’s lead and put two large bolts through my seat tower and foil to hold it securely in place. Now the foil had a secure connection to the board. The wing nut wobble was gone. Through bolting also saved many a foil from going to Davy Jones’ Locker when people forgot to put in the safety pin on the stock set up.

We also started using the footpads from the Hyperlite wakeboard boots. The form fitting Shock Pad molded to the feet, and held them in place for a much better connection. 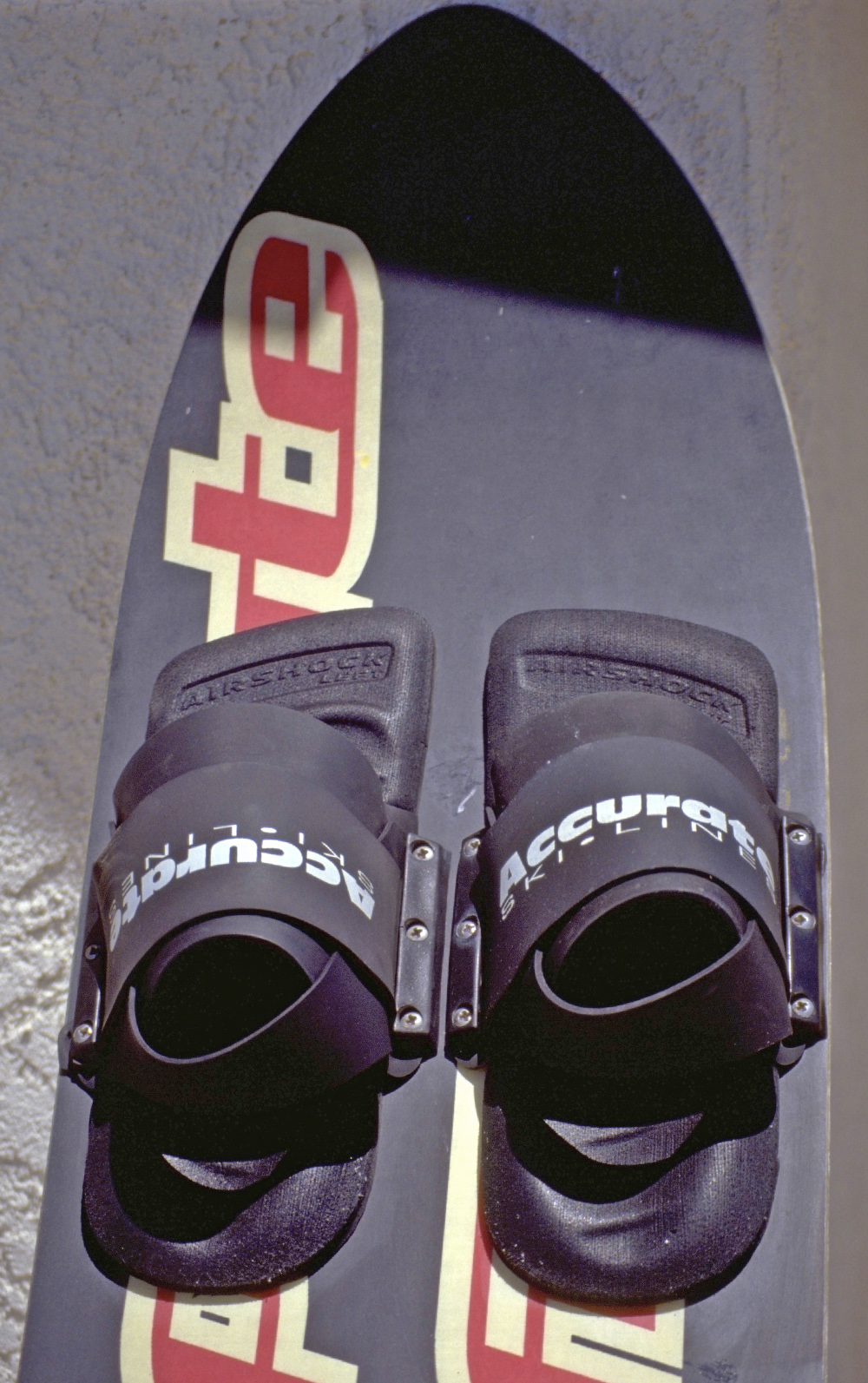 Footpads from Hyperlite wakeboards were a welcome addition.

I came off the front of my seat on a hard front flip landing, and each vertebrae of my lower back grated against the hard lip of the seat tower. I remedied this by adding a thin piece of neoprene over the stock seat pad with two cut outs for my butt cheeks. The centering holes worked great to get in the perfect spot on the seat, and the small lip kept me from ever sliding off the tower again. 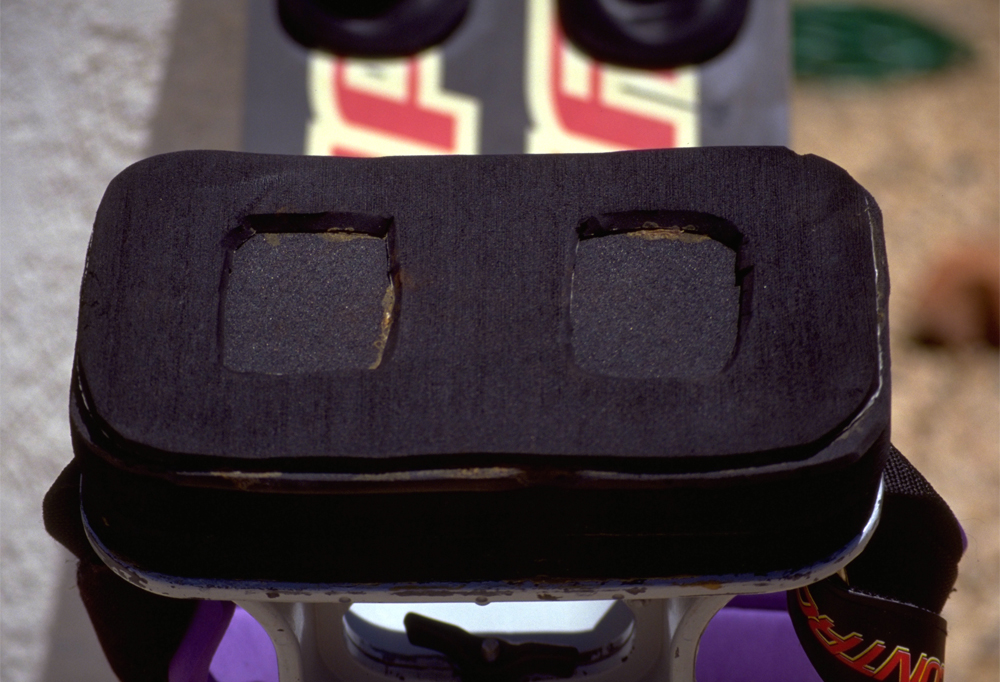 My custom butt cheek cut-outs to help stay on the seat pad.

We were all jumping higher than ever, and Mike wanted to find a way to cushion the landing. Some riders had been doubling up on the seat pads, but this was only a band-aid remedy. Mike enlisted Bob Dunham to help him build a spring seat. They sandwiched four Volkswagen valve springs between the top of the seat tower and another plate with a pad. The stiff springs allowed for about 1-2 inches of movement. The spring seat did exactly what it was designed to do, but Mike did not like the disconnected feeling he got while riding. He missed the solid connection, and passed one of the prototypes on to me. I liked it. I rode it for about a year until the springs wore out. The idea went back to Air Chair where it sat on the shelf.

I never liked the seat belt on the original Air Chair. The strap was thin, it did not have any padding, and the hard clasp buckle always dug into my hip and gave me bruises. My first solution was to create double layer of padding by wearing a pair of neoprene jump shorts under a wetsuit. The big breakthrough for foil straps came after I designed the HO Joker kneeboard in 1993.[iii] Herb O’Brien (HO) also asked me to redesign the strap. My new triple locking 2-1 strap didn’t have any revolutionary breakthroughs, just the best features of all the previous straps rolled into one. 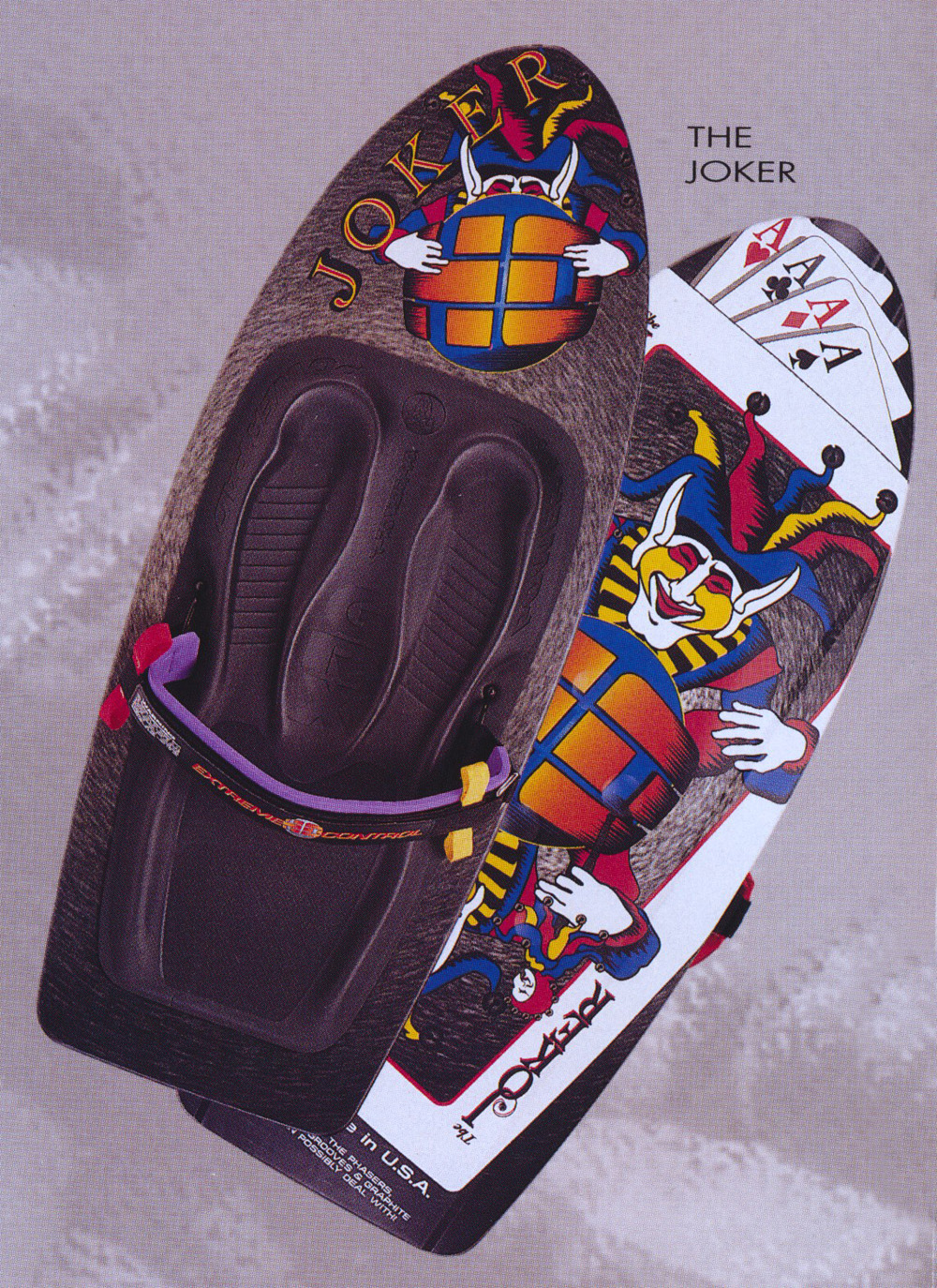 When the first Joker arrived at my house in late 1993 it wasn’t long before I tried my new strap on the Air Chair. It worked perfectly thanks to the fixed pad that didn’t slide around, tabs at the end of the straps to keep them from slipping through the footman loops, and extra length with plenty of Velcro. It made a huge difference for me right away, but it took months to talk Mike into trying one. Unfortunately for Mike his very first ride with a triple locking strap was with one of the recently released overseas models, and it was defective. The stitching came out when Mike was in the middle of a flip, and he ejected at over ten feet high! That little piece of bad luck for Mike had him wondering about the safety of the strap and it took awhile for them to be widely used.

Bob Woolley, as the president of Air Chair, was generally resistant to unnecessarily changing the product. His contention was that Air Chair was the only sit down hydrofoil on the market, and people would buy whatever they sold. The company was making money, so he felt there was little need to continually spend a lot of money on R&D when people would buy the product just as it was.

Mike was the opposite. He was always pushing for change, and would have included all the new innovations, even at the expense of making less money. It was one of the fundamental differences between Bob and Mike, and yet another reason why they eventually split.

After a couple of years Air Chair finally redesigned their foil and deck, which was a great improvement. HO was still making the decks, and I was working for them, so Herb made a couple of special graphic boards just for me. One used the Joker graphics from our kneeboard, and the other was an all black ski with Hyperlite in huge block letters. 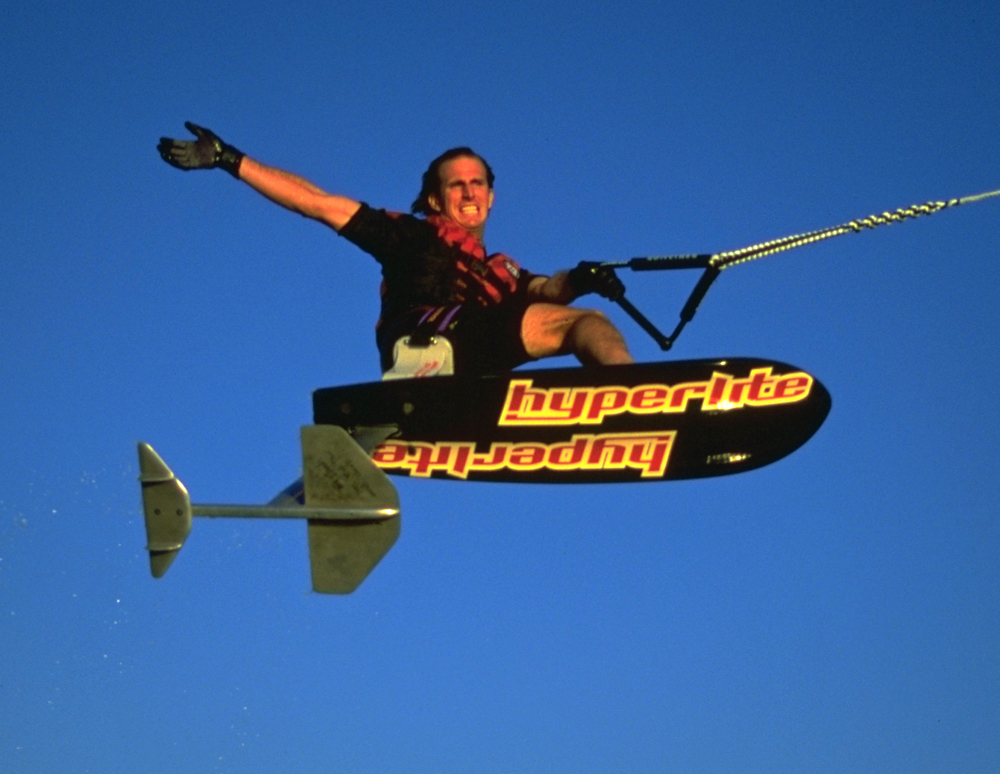