I travelled the world as a water skier for well over two decades. Living out of a suitcase meant hundreds of restaurant meals with friends and business associates. Ever since I could remember I was a fan of simple magic tricks, brain teasers, and visual oddities that you could do at a table. It was fun to share them during meals on the road, and pretty soon I picked up quite a repertoire of what I called “table tricks.” I saw someone at a party rub their head with a balloon to build up static electricity. They moved the balloon towards the wall as if it would stick, and then stuck their head to the wall instead of the balloon. I added it to my collection. One time, when I did the balloon trick at a restaurant, a lady who saw it started laughing hysterically. Her hyena’s laugh even funnier than the trick! I picked up another trick during a flight on the way to a boat show. One of the flight attendants grabbed his own head and chin, and then twisted his neck. A huge crack rumbled down the aisles and a grown went up from the passengers. The attendant reached into his armpit to reveal the true source of the noise, a smashed plastic cup. Laughs of relief followed. Other classics included the funny folding fake fork, a noise with a straw, and corkscrew theatre. I eventually collected so many of these that someone suggested I write a book.

Silly me, I tried.

The title was 96 Table Tricks. The pitch was “amaze friends, delight onlookers, and stump even the smartest cookies at your next mealtime gathering.” The premise was “everything you’ll need for these stupefying, startling, and silly tricks will be commonly found at any table. Plus your audience is conveniently captive.”

I spent hundreds of hours researching, writing and organizing. When I had a comprehensive list of tricks my friend Mark Moseley from Cleveland Chiropractic College made dozens of drawings to illustrate the step-by-step instructions.

Just for fun, I made a few videos of these “Table Tricks”

Here’s a classic move I learned from Cap’t Craig at a Mexican food joint inside a convenience center.

Moseley and I had high hopes the book would sell. I knew the tricks were popular because I had already been performing them for years, and people universally loved them. Once a person saw a trick, they always wanted to learn how to do it themselves, and always asked if I knew any more.

Unfortunately the publishers did not bite at my query letters explaining the project. I collected 70 or 80 rejection letters. It was quite a shock. Most of the replies were the standard “not interested at this time,” but a few people actually took the time to offer guidance and encouragement. The main gist was that I had a good idea and should consider self-publishing.

I duly looked into that possibility and ran across Dan Poynter’s How to Self-Publish Manual. It was widely regarded as the ultimate guide in that arena, and the tips were very useful.

As I got into the book it occurred to me that I might have a hard time with my 96 Table Tricks book. Poynter was adamant about targeting to a market that a person has passion and expertise in. For me that was water skiing, and specifically hydrofoiling. Poynter’s book had a section on newsletters, and that was the direction I decided to take.

The original title was Flight, The Air Chair Newsletter, but after just two issues I modified it to Flight, The Hydrofoiling Newsletter because of the impending split between Bob Woolley at Air Chair and Mike with his new company, Sky Ski.

Flight Hydrofoiling started out at 16 pages long, filled with tips and tricks, an interview of a top rider, and extreme news from around water skiing. It was successful enough to pay for itself right away, and I started to build a business with hundreds of subscribers, advertisers, and even a small mail order section.

It was quite a period of learning how to do all the photo editing, design layout, and printing. It was a joy because I was paid to promoting the sport I loved. 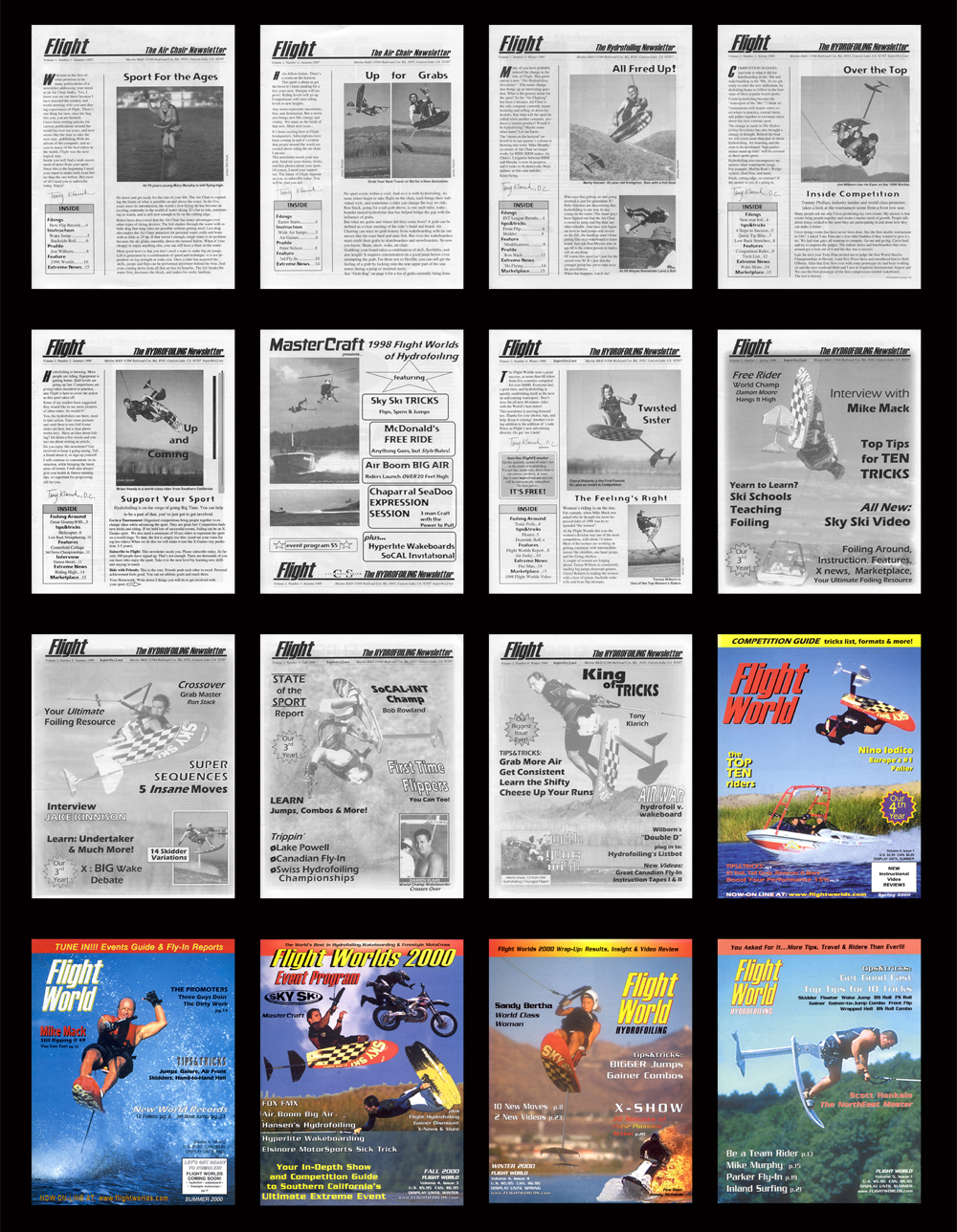 You can instantly download each issue of Flight for FREE right now at TonyKlarich.com 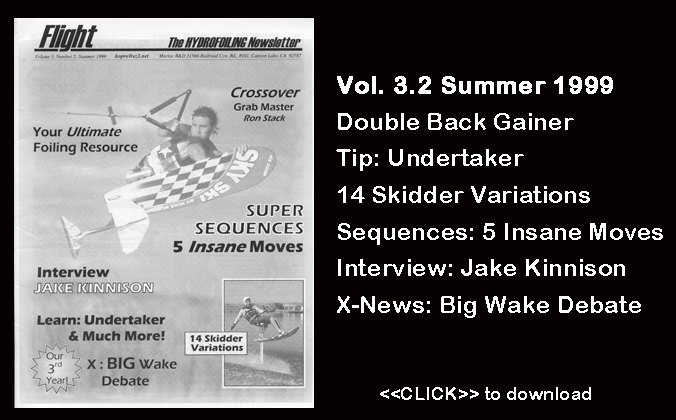 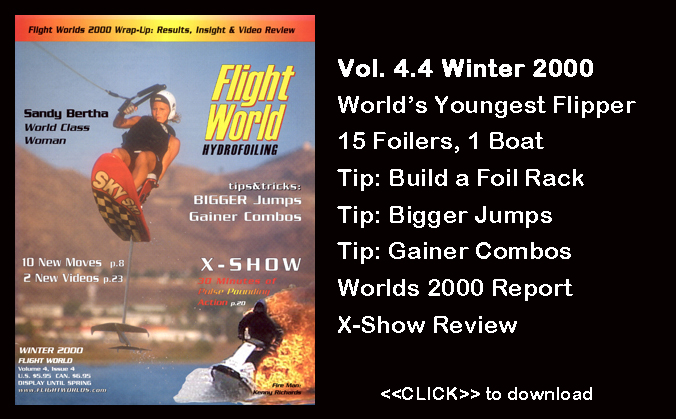 The first issue in the summer of 1987 featured my grandmother on the cover with the headline “Sport for the Ages.” The feature story was on the first Worlds. I eventually put out 16 issues over 4 years, and it was just the vehicle the sport needed to spread the word. The final issue culminated with coverage of Flight Worlds 2000, an event that was my biggest by far, and a near disaster. The Worlds coverage in the first and the last 2 issues of my newsletter was a nice pair of bookends for a time in my life filled with hope and promise for the sport I was passionate about.