Adventures in Water Skiing, Hydrofoiling. Welcome to My Worlds.

Adventures in Water Skiing, Hydrofoiling. Welcome to My Worlds.

WELCOME TO MY WORLDS

I was impatient for hydrofoiling competitions. Most people recognized me as the top all around rider in the sport since my coming out party at the first Fly-In in 1994, and I wanted to prove it.

Usually when you want something done, you have to do it yourself, and this was no exception. Going into the 1996 season I discussed the idea of holding a big competition with super-dealer Tommy Phillips in Denver, CO. He was already a pioneer of kneeboarding and wakeboarding contests, so it made sense he should host the first hydrofoiling Worlds. Tommy made it simple: all I had to do was come up with the rules and help promote the event. He would take care of the rest. 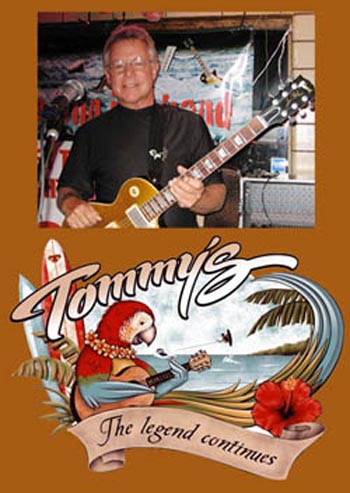 Tommy Phillips has been a driving force in the watersports industry for 40+ years.

We set a date and there was immediate interest. Riders from the United States and Canada packed up their gear and headed to Soda Lakes near Denver, CO to compete in the event. The world’s best riders were all on hand. 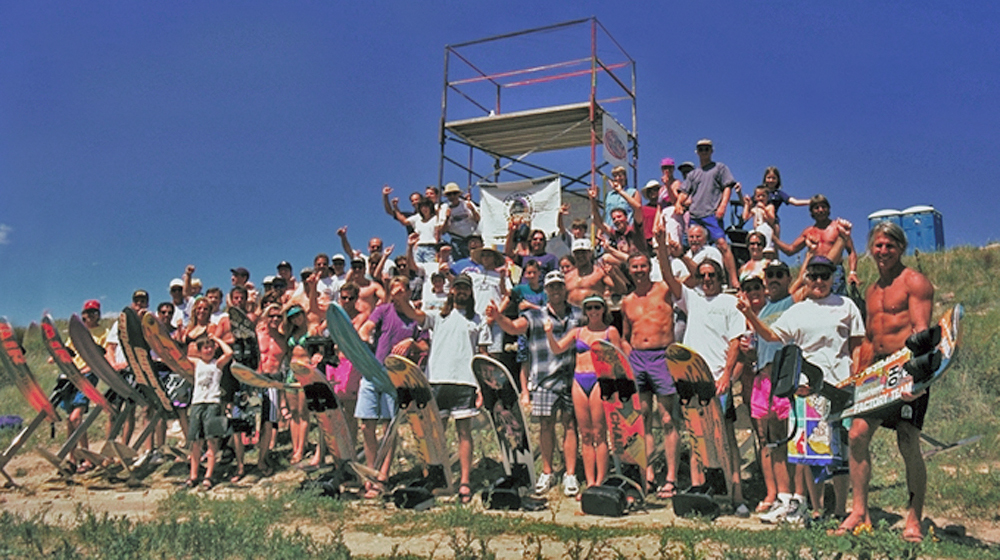 At the first World Hydrofoiling Championships in 1996.

The rules were pretty easy. I was in the midst of organizing the Hyperlite Wakeboard Tour for HO, so it was a no brainer to just use our wakeboarding competition formats as a template. Uncle Mike agreed, and I ran everything by Ron Stack and Mike Mack for their input. We used two formats: Tricks and Free Ride.

In Tricks riders got 2-25 second passes to do a total of 10 maneuvers in order that were written down on an attack sheet. Wakeboarding had a Wild Card trick for a bonus if you completed the second pass, but we substituted the Dismount, with points awards for the trick itself and how close the rider ended up to the dismount buoy. I added the Dismount for a couple of reasons. First, it was a spot close to shore that everyone could focus on at the end of a rider’s run. Secondly, we placed the dismount buoy in a spot that was a safe landing area. It was also in an area that facilitated a smooth transition to the next rider.

Free Ride was just that: three minutes to impress with tricks, style, and air. Darin Shapiro acted as our chief judge. Highlights included Ron Stack with his unique style and grab moves, Jon Wilborn’s huge laid out air gainers in the flats, and Bob Garlick’s wake gainer that was perfectly straight back. Many future champions competed in the inaugural event including Geno Yauchler, Damon Moore, and Todd Kyser (Ron loved to call his inverts “Kyser rolls”). 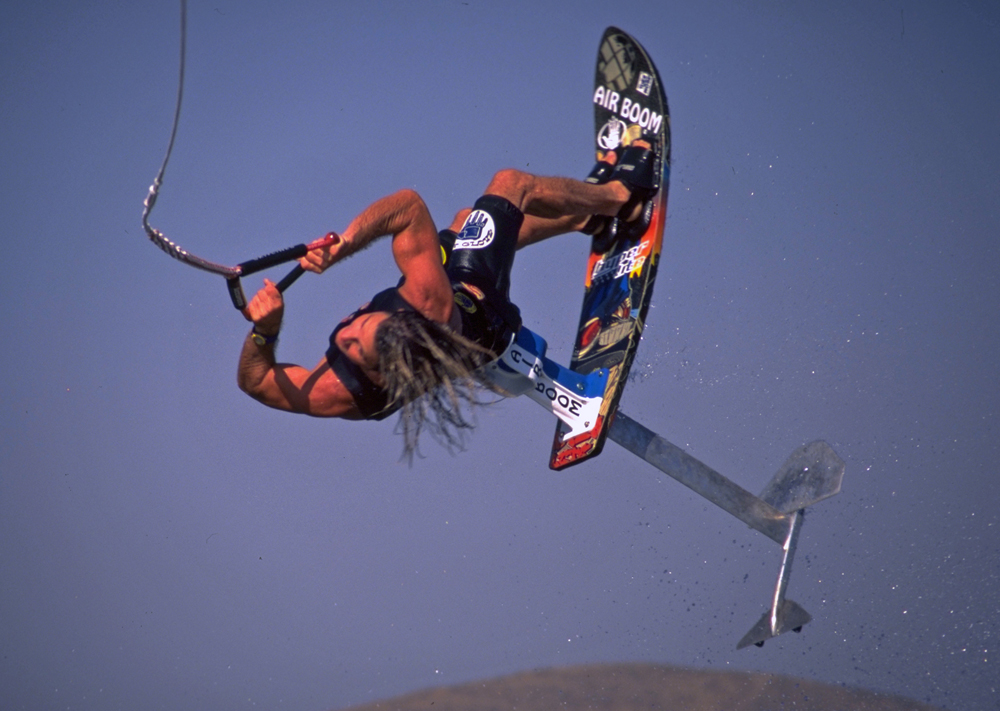 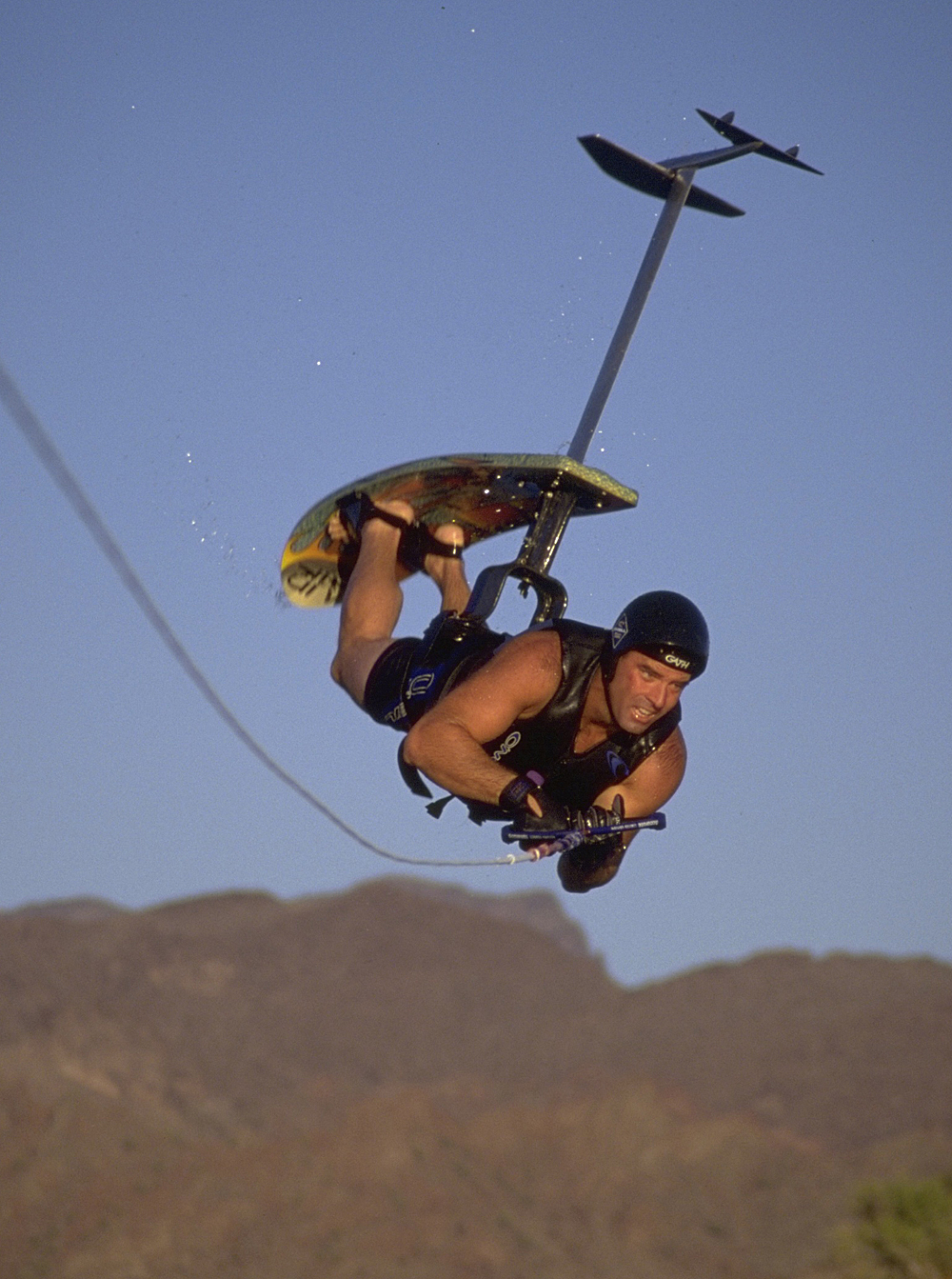 Jon Wilborn made waves with his laid out gainer. (Klarich, 1996)

I took first overall in the pro division, winning Tricks and Free Ride.[i] My wife Shonna won the women’s Free Ride. While my first place finish was not a surprise, uncle Mike’s performance in a close second was. It took every trick I had to overcome Mike’s manic riding. He packed more tricks into three minutes than most riders in three days. 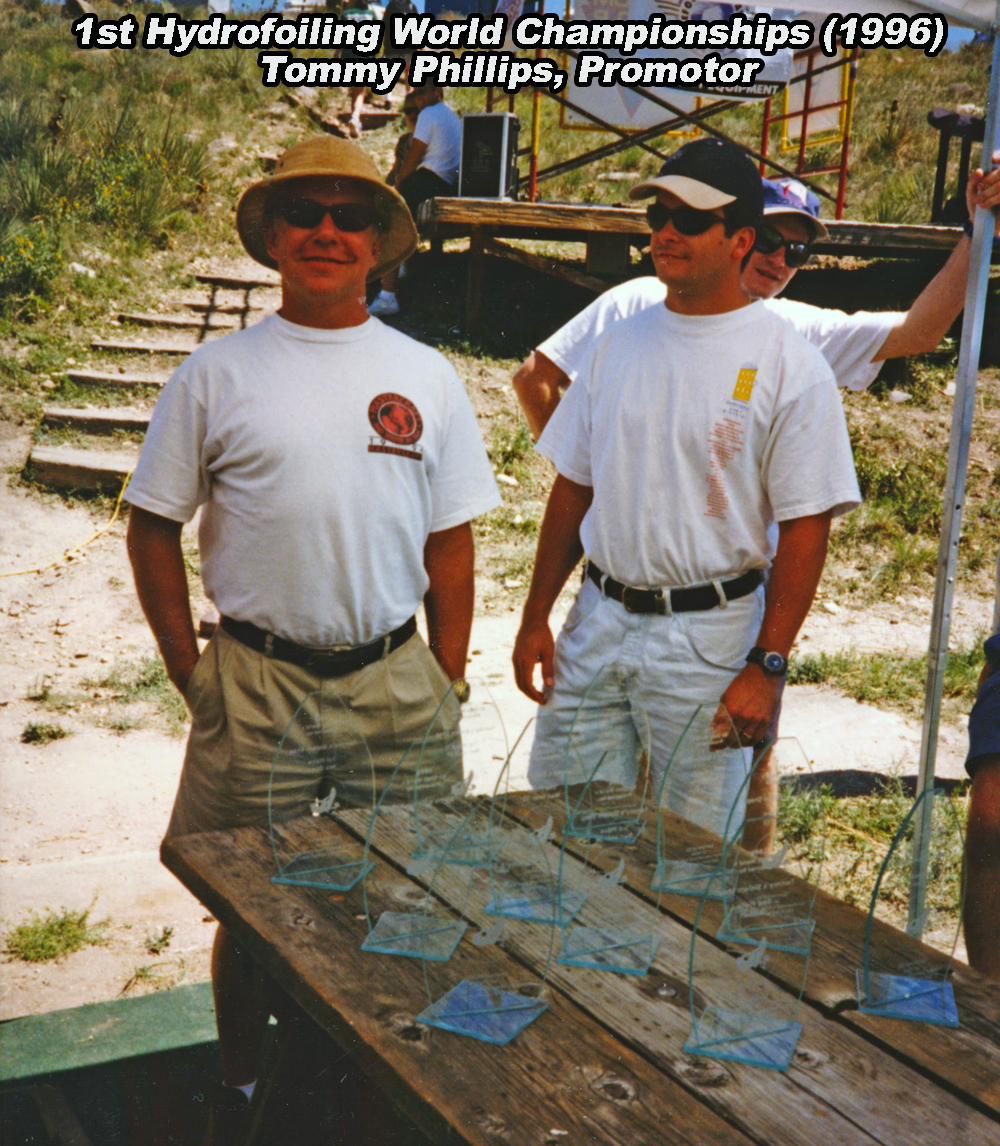 Tommy Phillips gets ready to hand out the awards. 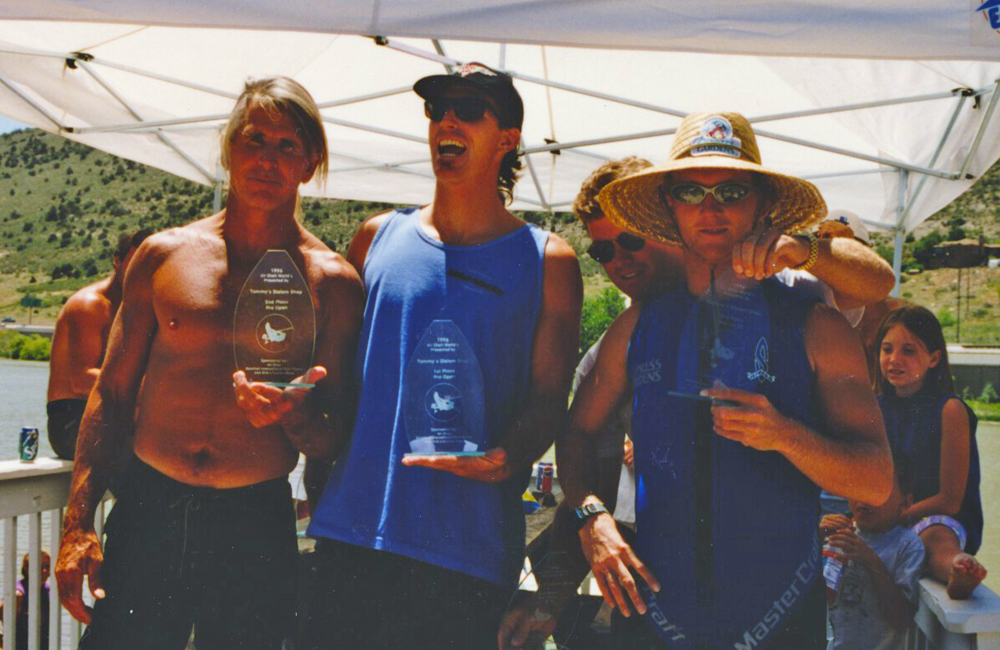 Tommy Phillips initiated a Hydrofoiling Hall of Fame, and deservedly inducted Mike Murphy as the first member.[ii] The entire event was a crowning success for foiling, as riders got pumped up on the idea of competing and learning new tricks. Everyone went home with fire in their eyes, ready to tell their friends and do it again.

1996 was also the year that the Pro Water Ski Tour had a 4-stop series of competitions for hydrofoilers. Air Chair put up the cash to sponsor the event, and the overall grand prize was a 3-person sit down Sea Doo. I competed against Dean Lavelle, Zane Schwenk, and Geno Yauchler. We used the Tricks format, which was the same one being used by the wakeboarders on the Tour. That made it easy for us as the riders, but more importantly smoothed the transition for the judges who were seeing competition foiling for the first time. The crowd reaction was very good, and a few of our runs showed up on TV. In the end I won most of the stops and the overall Tour Title.

Suited up to Air Chair at a Pro Tour Stop on Blue Lake Park, OR (with support from Team HO/ Hyperlite riders Wade Cox & Darin Shapiro). My Air Chair is at bottom left, 1996.

At a layover on the way home from one of the Tour Stops, I watched as my Air Chair deck get wrecked. I was very fortunate through the years to have had very little damage to any of my equipment during flights: except this one time, and I saw it happen! I kept my Air Chair in a bag designed by Charlie “Chaz” Saunders. To pack the bag the foil assembly was removed from the ski, and placed in padding with the strut through the seat tower. Once packed, the bag looked a little odd. I would get queries all the time at airports about what the heck it was. People guessed everything from a dog sled to the Little Old Lady’s giant shoe. I got asked so often that carried a picture of the Air Chair in action to whip out and share. 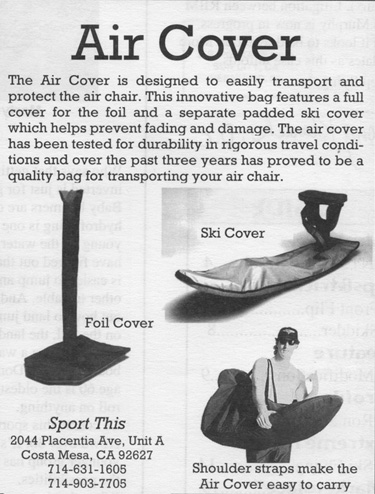 On the layover in question I was sitting at the window seat watching the bags come down the conveyor belt from the belly of the plane. I saw my black foil bag rolling down and so did the baggage handler. He got a funny look on his face, and when the oversized bulky bag came to him, he swung it around and gave it a big heave. It looked like the hammer throw in the Olympics. Sure enough, I found that the unkind toss had completely cracked the tail of the deck and ruined the board. The airlines did pay for a new ski after I explained what happened.

Most of my flying for water skiing took place in what I consider the glory days of air travel (prior to 9-11). I usually arrived in my car at LAX just 30 minutes before a flight, and still had plenty of time to spare. I checked my bags curbside, parked across the street, and hightailed it the gate. There were plenty of times I got to the airport 15 or 20 minutes before the scheduled departure and still made my flight.

Checking my big bags with the skycaps was the easiest way to get them on without paying for excess baggage. I often travelled with well over a hundred pounds of gear. A nice tip to the skycap always got the bags on, no questions asked. But whenever I had to check my ski gear inside, I developed a neat little trick to avoid the excess fees.

The ticket agent at the counter would invariably ask what was inside the bags. I soon discovered that the answer “an Air Chair” raised more questions, brought in the supervisor, and cost more money. The best answer to “what’s in the bags?” was always “ski equipment.” The airlines do have a code for that because of all the people travelling with snow skis. That nifty little trick almost always got my gear on for free without any more questions.

It was directly after the first Worlds that Geno Yauchler came to the Parker Strip to try and break Mike’s consecutive flip record. Geno was a Cypress Gardens skier who was also a regular on the 1996 Pro Water Ski Tour as hydrofoiler and freestyle jumper. Geno had been practicing for the flip record while using a harness and release that he could use to hook in and rest his arms during his runs. Unfortunately for him it was ruled that he could not use the harness for the record attempt. I think it was very smart for Geno to have come up with an ingenious system to get some relief during record attempt, but Air Chair had every right to specify the rules since they were putting up the cash and prizes.

Geno still had a few tricks up his sleeve. He had learned from Mike’s mistakes. Geno started early in the morning, took water and apples for nourishment, and fueled the boat on the run. He did battle with the ever-present riverweeds, and almost fell in the first few minutes because of them. But he fought through it and continued rolling on the River for more than four hours. When it was done he completed an astounding 1,416 consecutive flips without stopping or falling. In fact, he never fell. Geno just called it quits when he reached the goal of exactly doubling Mike’s previous record.[iii] His amazing accomplishment earned him the promised $1000, a free Air Chair, and payment for all his expenses. He got a great round of press coverage for his amazing feat, and a huge amount of respect in water skiing circles. I was happy for Geno. It was his breakout performance as a hydrofoiler. 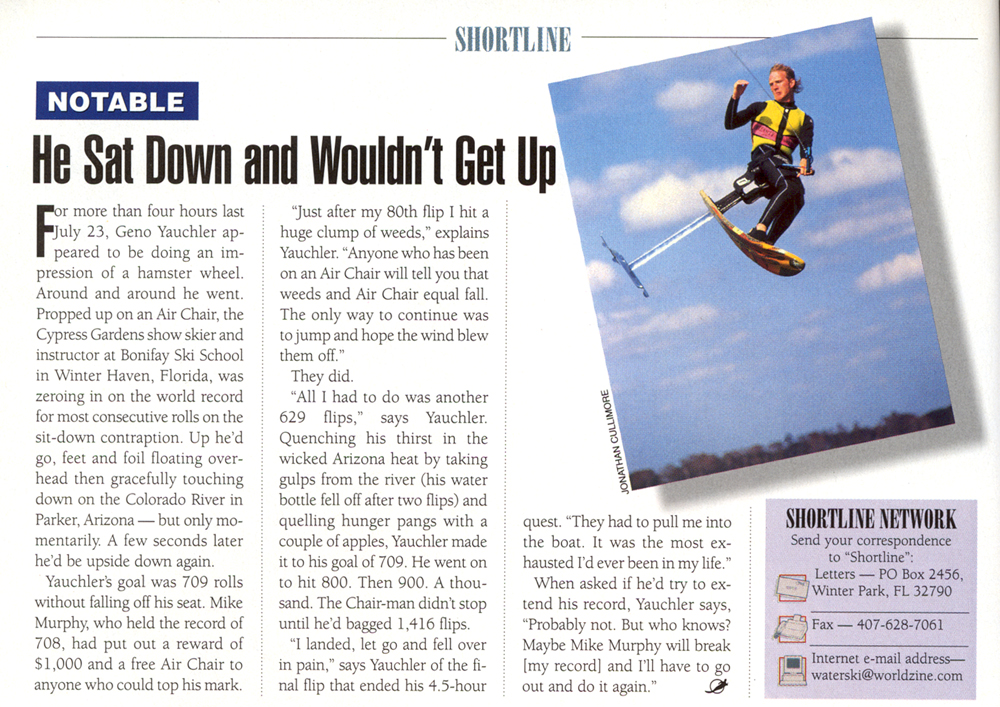 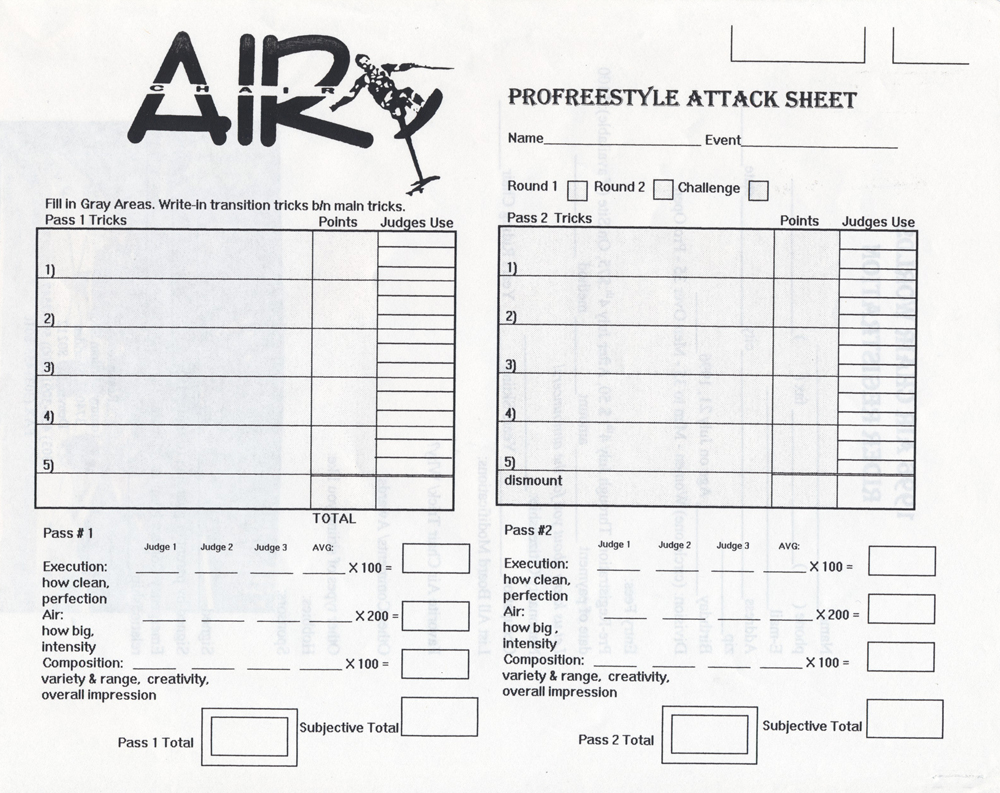 Attack Sheet for the 1996 Season

In 2014 Tommy Phillips was the leader behind the foundation of the Wakeboarding Hall of Fame.