A trio of riders from North Carolina refused to roll over for the wakeboarding juggernaut. Jonathan Macdonald and his brother David were joined by Billy Rossini in an effort to resurrect kneeboarding.[i],[ii] The triumvirate of tricksters pushed kneeboarding into a new direction that was based on big air. Not the big air that posers flippantly brag of. It was the kind of air that made even seasoned skiers watch in shock and awe. It was the kind of air that caused spectators to reach for their own knees and backs in sympathetic pain. Their pioneering style was motivated partly by a desire to prove that kneeboarding could be still every bit as exciting as wakeboarding, and partly just for the thrill of creating something new. For David Macdonald and Billy Rossini, it was also a way to gain recognition without submitting to the limits of competition.

It all started with the wake. Lots of skiers and boarders had already figured out that adding weight to a boat made a bigger wake. But Billy and the Macdonald brothers took weighting to the extreme. They filled every nook and cranny of Jonathan’s Malibu Sunsetter with lead and concrete; almost a ton of extra ballast. The boats of the day were not even tested to withstand the loads they routinely rode with. Their boat was so heavy they had to get a new prop just to get up on plane. Now the Carolina crew was getting the kind of air that made heads turn and jaws drop. 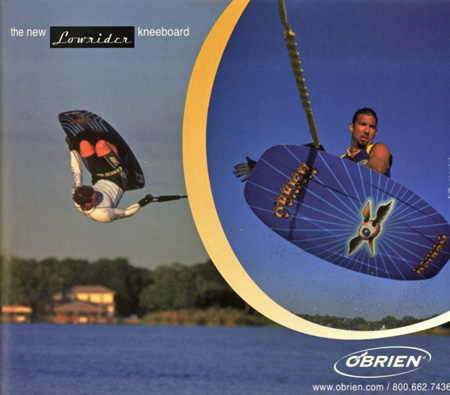 The highlight reel was no longer the quick wake-to-wake maneuvers of timed trick runs. The state of the art was longer lines, faster speeds, and balls out cuts into a massive wake. The result was a considerable increase in time aloft. More time in the air opened the door to a plethora of new tricks.

Jonathan, David, and Billy were a team, working together to pioneer a new way to kneeboard. One of them would come up with an idea, like a front flip with a half twist, and then they would each take turns until one of them landed it. The others would soon follow.

The cross pollination that spread from kneeboarding to wakeboarding now reversed its course. Wakeboarding influenced kneeboarding. Jonathan added grabs to his insane layouts. No one went bigger.[iv] Billy busted it big with the S-Bend: an Air Raley with and overhead 360 while extended.

The crew went combo crazy, switching the direction of rotation on their f lips between the head high bounces. The boys were breaking boards, right and left. Jonathan went through more than 30 in one season. They just weren’t made for this kind of air.

“I never knew you could ride a kneeboard like that,” was commonly heard at the time. Even wakeboarders like World Champion Dean Lavelle had never seen a boat weighted to such an extreme. Dean nicknamed Jonathan’s boat the Tsunami, and the name stuck.

The new style of kneeboarding led to disagreements on the Pro Tour. Jonathan wanted to showcase the new style, but not everyone wanted to follow his brash lead, submit to his head start, or subject themselves to the abuse of the new style.54 Nonetheless, something had to be done because kneeboarding was loosing ground fast. Jonathan’s supporters saw the new style as a way to inject life into a dying sport. But change was not easy with the AKA Tricks competition format firmly in place. The AKA formats that were the backbone of the Tour now became a limiting factor. The Pro Tour kneeboarders needed freedom of expression and the ability to adapt quickly in order to have a chance of competing with the wakeboarders.

In 1995, the last year of kneeboarding on the Pro Tour, things finally opened up. “For once, new tricks were approved,” said Mario Fossa.[v] Air and style were king, and new tricks were encouraged. Anyone could pay a hundred bucks to get a challenge ride on Friday in the qualifying round, but only 10 kneeboarders showed up while there were 100 wakeboarders.

Even so, the crowd response was enthusiastic for the wide-open style. Unfortunately it was too late. Money had already switched to wakeboarding, and at some of the events the kneeboarders did not even get filmed for TV.

The end of the Pro Tour heralded the demise of kneeboarding, but David Macdonald had one more breakthrough move to fire as a parting shot. The race for the first double rotation flip off the wake was a highly prized honor that was yet to be claimed. I saw Ted Bevelacqua beat himself silly trying double back rolls at our shoot for The Kneeboard Authority in Florida. Darin Shapiro was another fellow HO/Hyperlite rider who I saw attempting double front flips off the double up on Radar Lake in Washington.

Ultimately it was David Macdonald who claimed the prize; the first person to ride away from a double off the wake.[vi] Shapiro was just a week behind. David Macdonald got the cover of Water Ski magazine, but Darin Shapiro’s “Speedball” gained wider glory as an iconic move in watersports and beyond.

Even as kneeboarding was in a definite decline, a contingent of big air riders continued to go off. “Pistol Pete” Parrillo landed a triple wrapped wake 1080, and Rob Donisi performed the first double front flip.

The trend towards air and style also caused friction between the old guard of the AKA and the new riders who wanted to take the sport in a different direction. The continuing conflict further hastened the fragmentation of the sport. Eventually a Free Ride event was added to the AKA National competitions, but attendance was lukewarm at best. In recent years Mike Marchand, son of kneeboarding pioneer Lonnie, became a 3-time Free Ride champion.[vii] One of his biggest moves combined various elements into one huge combo trick. Mike started with an Air Raley, turned backwards in the air and landed blind in the flats. He bounced and immediately went into a backwards back air flip.

[i] Interview with Jonathan McDonald – February, 2010.