Because I have skied on so many different things people often ask, “What is your favorite ride?”

So here’s the answer, and 9 more of my all-time favorites:

My uncle Mike Murphy was the co-inventor of the original Air Chair in 1989, so the sit-down foil has been a big part of the family tradition for more than 25 years.

Why do I love foiling so much? It really is like a magic carpet ride. The foil cuts through waves and chop, and it’s easier to flip than anything else I ride. Not to mention the jumps are bigger and the landings are softer.

Now don’t get me wrong, the possibility for injury is ever present when you have 40+ pounds strapped to your lower body and you are flying 10-15 feet high and more than 50 feet. But I have been riding for so long that the tricks come easy, and I almost always avoid hard crashes. The sit-down foil is by far the easiest ride to flip on, and I hope to do it at 100 years old!

2. Hot Dog Slalom Ski.
I’ve always loved doing tricks on a slalom ski. I followed in uncle Mike’s footsteps (he is considered the Father of Hot Dog Slalom Skiing), and made a name for myself inventing dozens of new moves in the 1980s and 1990s. I love the speed and technical aspect of hot-dogging. And even now so few people do it that it still gets the crowd going.

With my recent switch to the HO Freeride ski, I have never been more excited about slalom tricks! The Freeride is literally the best ski I have ever ridden for my style of riding. More on this amazing ski in a future post…

The Best How to Hot Dog Video Playlist on YouTube

3. Wakesurfing.
For ease of use and low speed fun, wakesurfing with a 20-25 foot rope has been a family favorite for years. It’s great when the water gets choppy in the afternoons, but still requires just enough skill to be engaging.

4. Picnic Table.
I wasn’t sure what my grandmother would say when I asked to ski on her picnic table. “Of course you can Tony”, was her sweet reply! The red table sat on the family back patio for years, and has been the gathering place for many a meal. Now I take it out for the occasional ride, and it’s always so special because it was my grandmothers. It’s really quite easy to ride, but the unexpected nature of the table always brings a smile.

5. Back Barefoot Step-Off.
I always get a little knot of anticipation before kicking on the flip turn ski. The 180 turn from front to back at 24 mph is just as hard as the actual barefooting, but the thrill starts after planting a foot and coming up to 40 mph backwards. Then there’s the moment of truth while kicking off the ski and planting both feet in the water. Even now I wonder how in the heck it’s possible, and I always feel like I just got away with something. 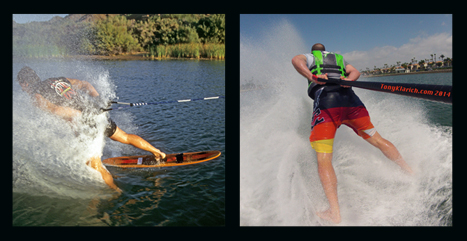 6. Ice Chest. I don’t exactly remember, but my first impulse to ride a cooler may have come from a picture in a ski magazine. Not really having any idea how to do it, and then figuring it out has been a fun part of the journey. The opposite foot forward start with the cooler on my head is always fun. With smooth water, a solid step-off ski, and my new ice chest, this has become one of my favorite rides. The added bonus is the always-amazed crowd response!

7. Guinness Book of World Records.
Guinness turned me down in 2004 for the “most ski rides on different things in one day”. They said my attempt was “a little too specialised for a body of reference as general as ours.” A couple years later I had the idea to try to ski on a book, and it wasn’t long before I figured out which one it should be. The only question now is will my “50 for 50” ride on the Guinness book be a ride of celebration or a ride of protest? Only time will tell!

8. Disc & Ladder / Disc.
I was introduced to discing by my friend Doug Pearce who did it will his dog. Maude climbed up the ladder herself and sat on the paint step while Doug got ready to climb. Forget about the flipping humans, dogs always steal the show! Doug taught me how to ride, I made my own disc, and have been having fun ever since!

9. Paling.
There’s something pure about riding on a 1″x 4″x 5′6″ piece of wood with no bindings and no fin. It is a bit tricky to make the start, and if I don’t ride for a few months it may take a few times. But somehow that oak board often finds its way into my ski bag.

10. Pyramid.
My hometown started a new show ski club this year (ShowCal Skiers: California’s only USA Water Ski Show Team), so I’m back to building pyramids after 30 years. It’s a challenging and rewarding experience to do a seated dock start with a girl on your shoulders, then coordinate with a team of six to build a three tier pyramid. But it’s not a true success until everyone is down safe and back on shore with a job well done. In my professional show ski days at Magic Mountain near Los Angels the guys just wore jump skis. Our club uses “show boards” which are much easier because they are so much bigger and wider. We look forward to taking our builds to even greater heights next year! I’ve never been involved with a 4-tier pyramid, but am looking forward to the opportunity. 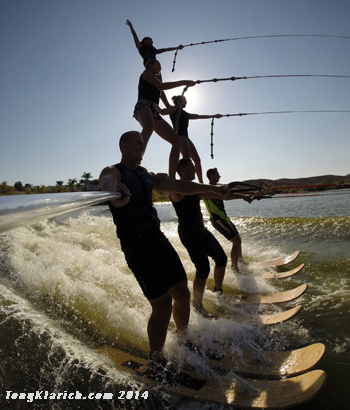 Grandma Murphy on Inside Edition