After I saw Mike make those first rolls at the Marine Stadium in 1991, I was on a mission to do them too. Mike was always an inspiration to my riding, and now he had a 3 year head start. It was time to fly!

1992  interview with Mike Murphy : The father of hot dog slalom skiing & the  co-inventor of the Air Chair

I knew that my background in kneeboarding and freestyle jumping would be a huge advantage. I decided to ride for one year before trying a flip. I had a healthy respect for the Air Chair after my injury riding the prototype, so I figured that really learning how to control the foil during jumps and recoveries would be key to my future success.

In the early 1990s I spent a lot of time skiing in “the hot water channel”, a 200-foot wide brackish ski spot that was a favorite of Long Beach locals. The nearby Edison factory pumped in water from the channel, used it to cool off their generators, and dumped it back into the channel. The water was warm, even in winter, but we tried not to think about all the pollution from the urban runoff upstream.

It was a big temptation to try some flips before my year was up, but I kept to the plan. My day finally came in 1992 with a ride on Canyon Lake, CA with uncle Mike. He had left the River, and was living in Canyon Lake. I started out by trying a trick that no one was making on the foil: a wake frontside roll. The motions were just like on a kneeboard, but the takeoff was delayed and the hang time was much longer. I landed my third try, and in less than a lap I figured it out while making a dozen in a row. It was exhilarating to be the first one to land a new trick, and I already knew that many others would do it too in the years to come.[i] That same day I also landed Mike’s wake backside rolls and air back rolls; all with no major crashes. All my work leading up to my big day of flipping had paid off.

With my first taste of real success on a foil, I was on a mission to surpass Mike once again. He led the way, and I followed. It quickly became apparent to me that I should be wearing a helmet. The height and hang time on the jumps reminded me of what I was doing as a freestyle jumper off the ramp. We wore helmets during the freestyle jump act at the Magic Mountain Ski show, so it made sense for me to do the same thing when hydrofoiling. The only problem was that jump helmets did not provide ear protection. I was concerned about ear protection because I had already broken an eardrum skiing. That painful injury came at Magic Mountain, as I was doing a long line front to back barefooting. That was a move I was already very comfortable with, and one day during a practice run I just lost my focus. That was not good at 40 mph. I caught me foot on the turn and launched. I came down head first, with my right ear leading the way. It hit flat on the water as full speed, and I got knocked a little silly while I floated in the water. When I gathered my senses and pinched my nose to clear my ears, the air just whistled right through my eardrum. Ouch!

Working at the Magic Mountain ski show in the mid 1980s was great training for foiling.

With that as my background, I thought about where I could find a helmet with ear protection. I had worn a modified football helmet as a helmet cam for photos with Rick Doyle, so that was the first thing I thought of. We used a football helmet because Doyle shot pictures for the San Diego Chargers, and they set him up with one of their old ones, lightening bolts and all. A friend of mine at work on the docks was a football coach, and he agreed to get me a football helmet. The look was complete when an Australian ski mate of mine, Brownie, painted “Air Head” on the back. 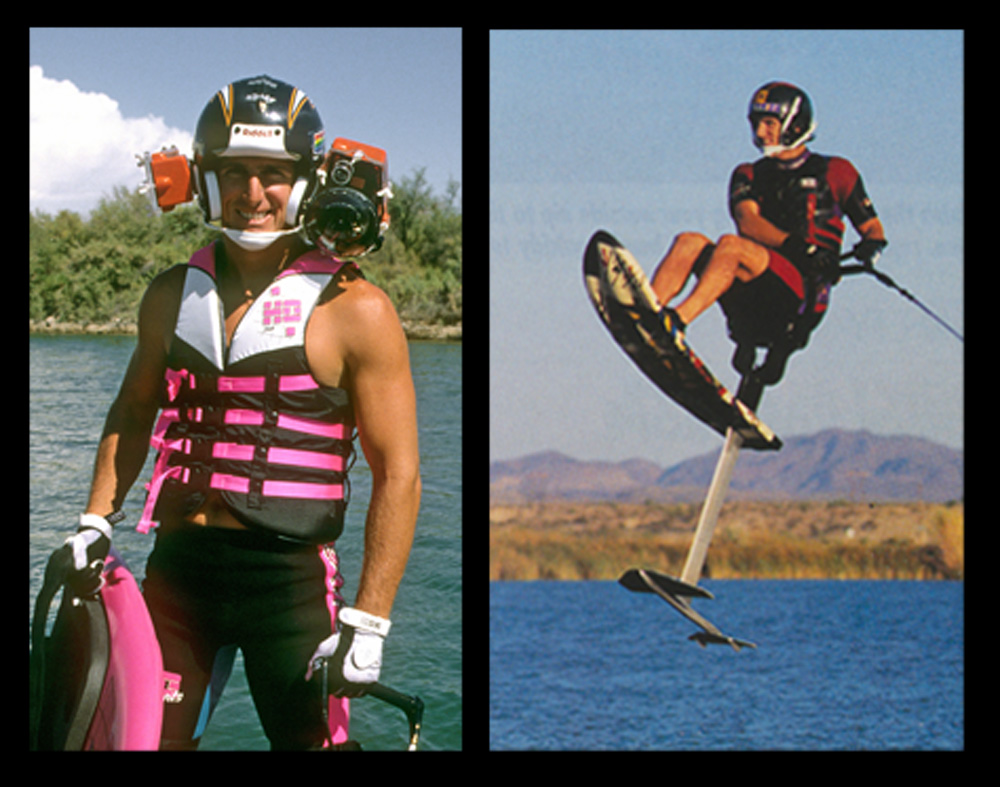 I wore that heavy helmet for about a year. The thing was so hefty that at times it seemed as if the weight was causing more injury to my neck. So I added a thick neck roll designed by Charlie Saunders for ski racers. That set up felt pretty good. It was very comforting to strap on my brain bucket and have my thick neck roll cinched up tight.

Mike hated the fact that I was wearing a helmet. He told me that it made the sport look dangerous.

I had already been saved during a gainer fall when my feet came out of the bindings (even with footstraps), and the seat tower and seat belt acted as a pivot point. The foil came all the way around and hit me squarely on the back of the head. That was the one fall that made me forever a fan of the helmet for foiling.

My next trick was an adaptation from freestyle jumping; the air wrapped helicopter. Mike was the first one to make hand-to-hand helis, but the trick was a hit or miss proposition for him. Unfortunately the misses weren’t simple falls. They were body-smashing slams that hurt just to watch. By 1993 Mike had pretty much retired his helicopter for everything except big shows and videos. Watching him crash and burn repeatedly made me pretty nervous about the heli. But my plan was different. I thought of the wrapped heli as a single over criss-cross on jumpers off the ramp. In that act I would wrap up, then get a good jump off the ramp before spinning, to get enough height to clear the two guys criss-crossing underneath me. I was convinced it would be the same on the Air Chair. Wrap up, cut out to the left. Jump first, then spin.

I should never have been so nervous. I came right around and landed perfectly on my first try, but lost the handle because I wasn’t ready to ride away. I made the second one, and by the end of that ride it felt like I had control of the trick. [i] It was my second big new move, and for years I was the only one doing helicopters consistently. 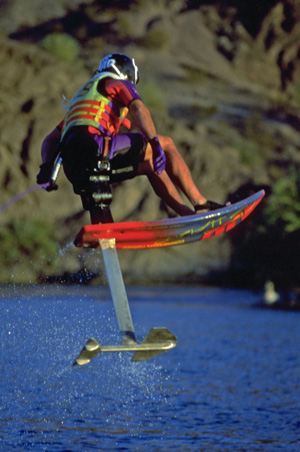 The air wrapped helicopter was easy for me to learn. (Doyle, 1993)

Sometimes the inspiration for a new move comes from watching someone else ride. I was at the Marine Stadium one day, foiling with my fellow “Stage Red” rider Roger Crocker. Roger was about 10 feet outside the wake on a boat turn and did a little jump. When he came down his wings bounced on the water for a couple seconds before he sank back down. He didn’t do it on purpose, it just happened. I instantly knew it was a new way to ride. I told Roger and got right to work. I didn’t know it at the time, but the reverse lift of the rear foil made the Skidder tough to learn. The rear foil was mounted upside down, so when the foils skimmed on the water, the rear wing pulled the foil down. But not knowing this I stuck with it. That was always one of my keys to learning a new move. Whenever someone asks me how to learn a trick, my first answer is invariably to keep trying. I took my own advice, stuck with it for at least ten minutes of each ride, and after a week or two I was able to hold my “Skidder” for 5-10 seconds. I kept my new move top secret for a couple of weeks, especially from uncle Mike. My plan was to unveil it at the upcoming shoot for the Air Chair promo video, and if Mike found out he would be on that move “like stink on shit,” he always said. The hardest thing about coming up with the Skidder was just imagining it. It is yet another example of a new move that most intermediate riders can master once they see someone else do it. It is one of the moves I am most proud of because it went out of the box to define a new way of riding, was accessible to the average rider, and was eventually worked into a myriad of combo moves. [i]

Grandma Murphy was training for the promo video too. Her big trick was learning how to ride. Mike wanted the video to show how easy it was for all ages to enjoy the Air Chair, so he spent hours in the boat and on a sit down PWC teaching her. Grandma loved every minute of it. Her endurance behind the boat was legendary, and she put it to good use learning to fly the Air Chair at age 75.

>Next Chapter: Shoot To Kill

Being a competitive kneeboarder was a great foundation for hydrofoiling

“Stage Red” (1991) In the days just before the rise of foiling,my local crew did some of the biggest moves in skiing.