The History of the Kneeboard, Knee Ski. Adventures in Water Skiing, Kneeboarding

The History of the Kneeboard, Knee Ski. Adventures in Water Skiing, Kneeboarding

1: THE HISTORY OF THE KNEEBOARD

Kneeboarding has had a rocky road on its way to becoming one of the mainstays of the water ski industry. 2013 marks 40 years as a commercially produced product. That’s been enough time for the kneeboard to grow from a fad in the 1970s, to public darling of the 1980s, and then mature in the mid 1990s as the Rodney Dangerfield of water skiing. And through it all kneeboarding continues to hold its own with sales of about 100,000 units per year.

The creation of any new sport is usually a drawn out series of events with an interesting cast of characters, and the development of kneeboarding was no exception. As far back as the early days of water skiing, riders experimented with kneeling down on round plywood discs. There were many others who fooled around with kneeling on surfboards and even people who rode on kneeboards made specifically for riding waves. But it was not until the early 1970s that a new product, the water ski kneeboard, was to emerge.

The development of the modern day kneeboard all started with a chance meeting between my uncle, Mike Murphy, and Bud Hulst. Hulst operated El Paipo, a manufacturer of kneeboards for riding waves in the surf. His El Paipo kneeboards had a hand shaped foam core with a fiberglass wrap. A pair of rope handles was glassed into the top of the board so riders could grab them during hard turns on the waves. Each El Paipo board came standard with a single nine-inch fin and thin neoprene pad.

Mike and Bud’s first meeting occurred after Hulst attended a wave-riding contest near San Francisco, CA in 1971. The event was blown out so Bud took the opportunity to visit the nearby ski show at Marine World. Bud hung out after the show and watched as Mike, Gary Warren, and a few other Marine World skiers took turns wake surfing for a photo shoot. They towed up on a surfboard, and then let go of the rope to catch the endless wave behind the boat.

Bud wanted to try it on his kneeboard, and talked his way into a ride. When he was done, Mike tried Bud’s El Paipo kneeboard too, getting pushed by the stern roller without the rope. The two men parted, but both were thinking about the possibilities of kneeboarding behind the boat.

A couple of months later Marine World became Marine World Africa, USA, and the new management had some bad news: all the runoff from the animals had contaminated the ski show site. Skiers could stay if they wanted, but Mike chose to head south to Los Angeles. Mike had thought a lot about his kneeboard ride on Bud’s board so when he got back to Southern California he went to Bud’s shop, and told him his ideas for a brand new product. Mike thought that the kneeboards made for surfing could find a much bigger market as a towable for water skiing. Mike wanted to take off the fin so riders could do surface turns just like trick skiers. He also wanted to add a thicker pad and strap so riders could jump the wakes. The strap would be easy because the turn handles in the El Paipo boards were already the perfect attachment point. Bud agreed, and the two men decided to create the world’s first production water ski kneeboard under the name of Knee Ski. 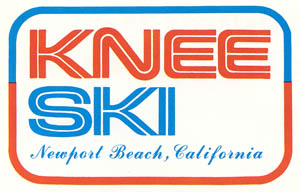 By late 1972, Mike had designed a board that would perform surface tricks, and still carve surf style turns. Knee Ski ran their first magazine ad in early 1973, with Mike launching over the top of the photographer by using a ski jump ramp.[i] The first boards had a pintail shape and were hand shaped from foam and fiberglass. 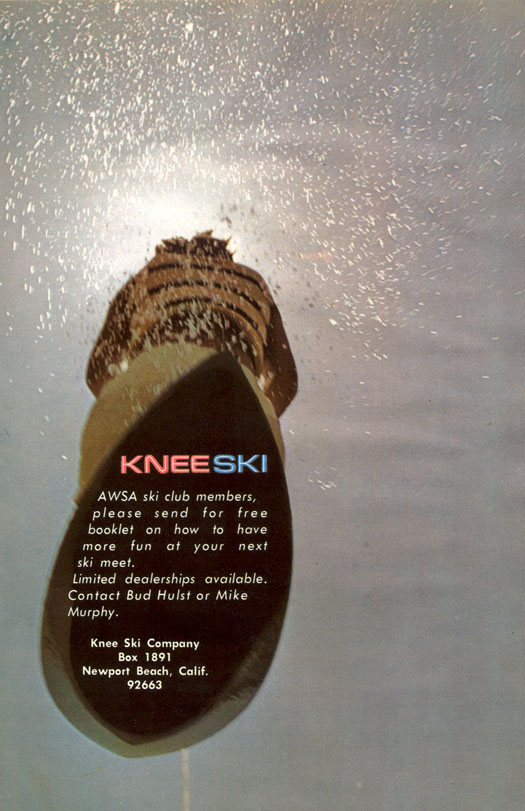 Mike Murphy Flies off a Jump Ramp on a Prototype Knee Ski, 1973

Mike rejected his original pin-tail shape because it caused too much drag, and he didn’t like how the foam boards floated so much. So Mike redesigned the board and Knee Ski switched to a neutral flotation model that was made from laminated fiberglass, just like a boat hull. Each Knee Ski had a flat neoprene pad covering the entire deck, and a Velcro strap. Now riders could jump and spin in relative comfort and security. 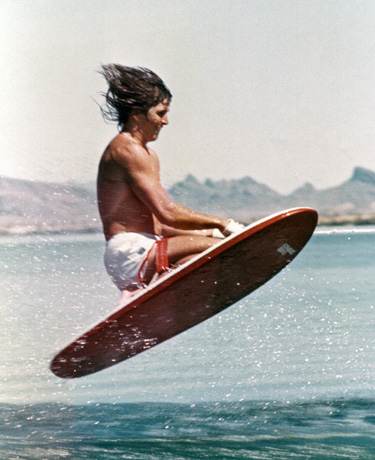 Knee Ski was on the market, and Mike hit the road for a year to promote the new way to ride behind a boat. In 1973 the production boards were being demonstrated at Marine World.[ii] Knee Ski also produced a booklet titled “Our Story” with tips, tricks, and illustrations. But with all this promotion the high price, $125 in 1973, met with small success and Knee Ski faded from the picture.

In 1973 I took my first kneeboard ride on one of Mike’s Knee Skis. We were at the Marine Stadium in Long Beach, CA and I easily did a sliding start off the sandy beach. But uncle Mike expected more than just simple riding and cutting across the wakes. He wanted me to do a 360 spin. Didn’t he know I was just an eight year old having fun keeping it simple? I didn’t want to do a 360, so I got a little upset about what he was trying to make me do.

Uncle Mike made it clear that my choices were simple: make the spin or swim in!

There was a moment of indecision. I was a pretty good swimmer, but we were a long way from our camp. So I got back up on the Knee Ski, and after a few tries the 360 was mine.

Uncle Mike led the way, and I was compelled to follow. I watched what he did, and copied. 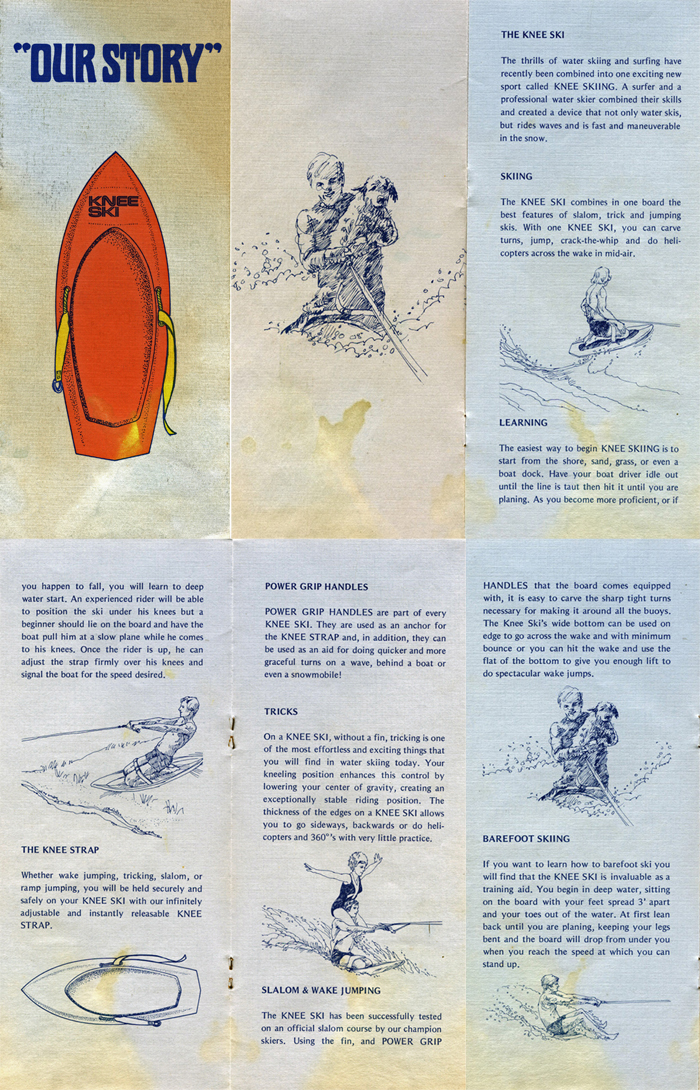 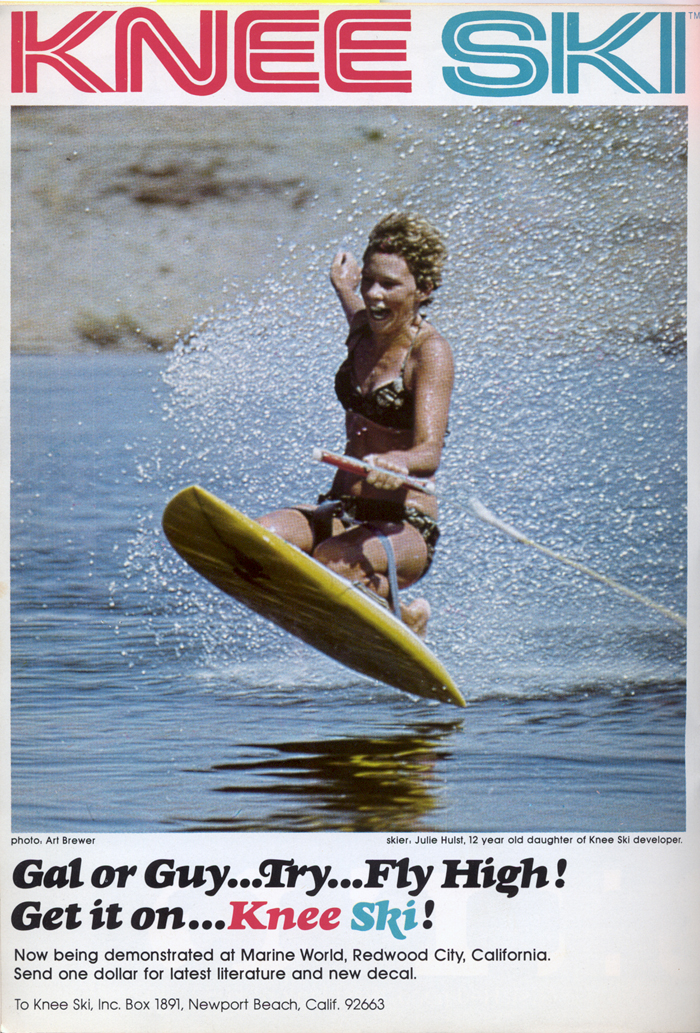 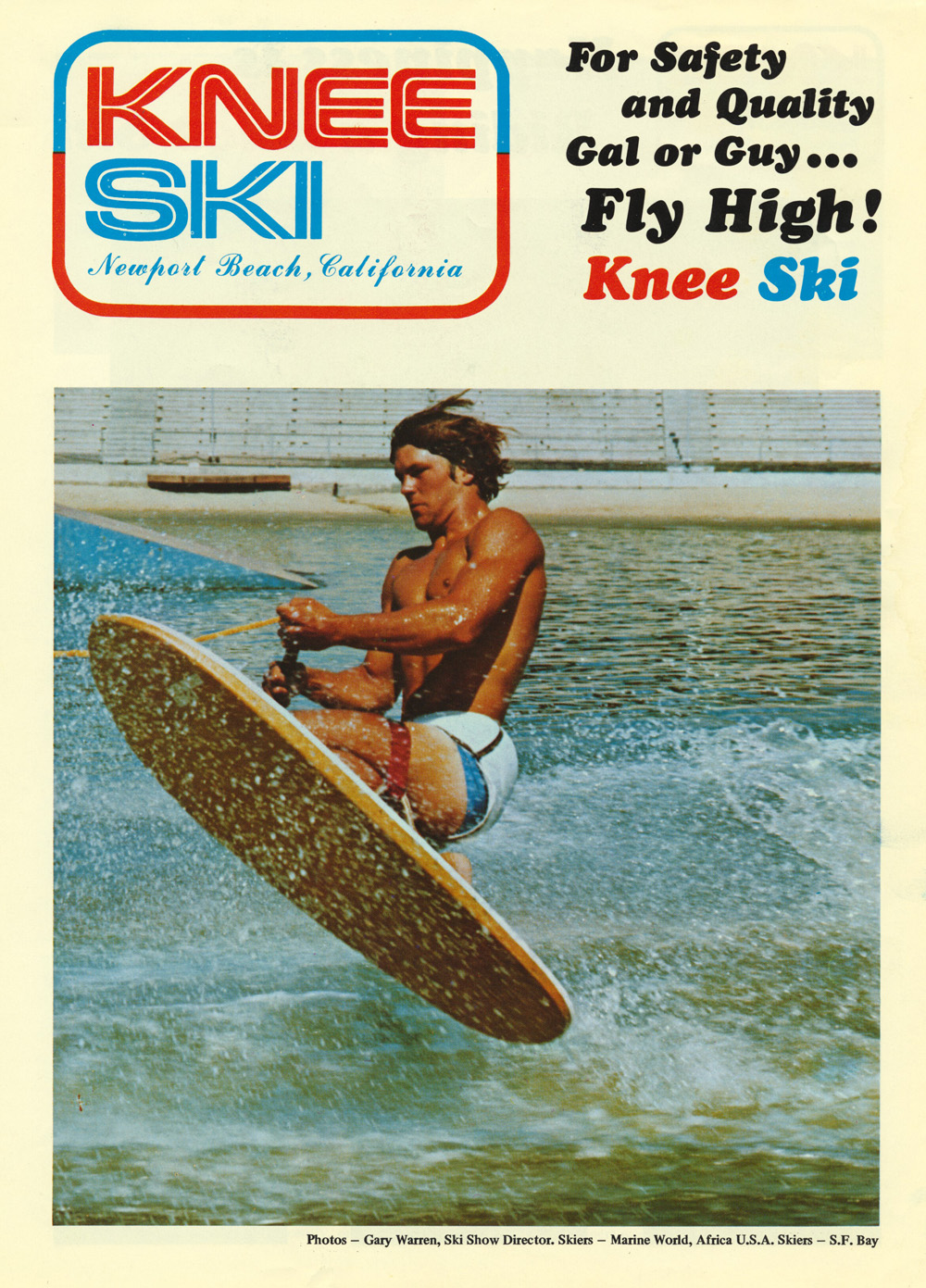 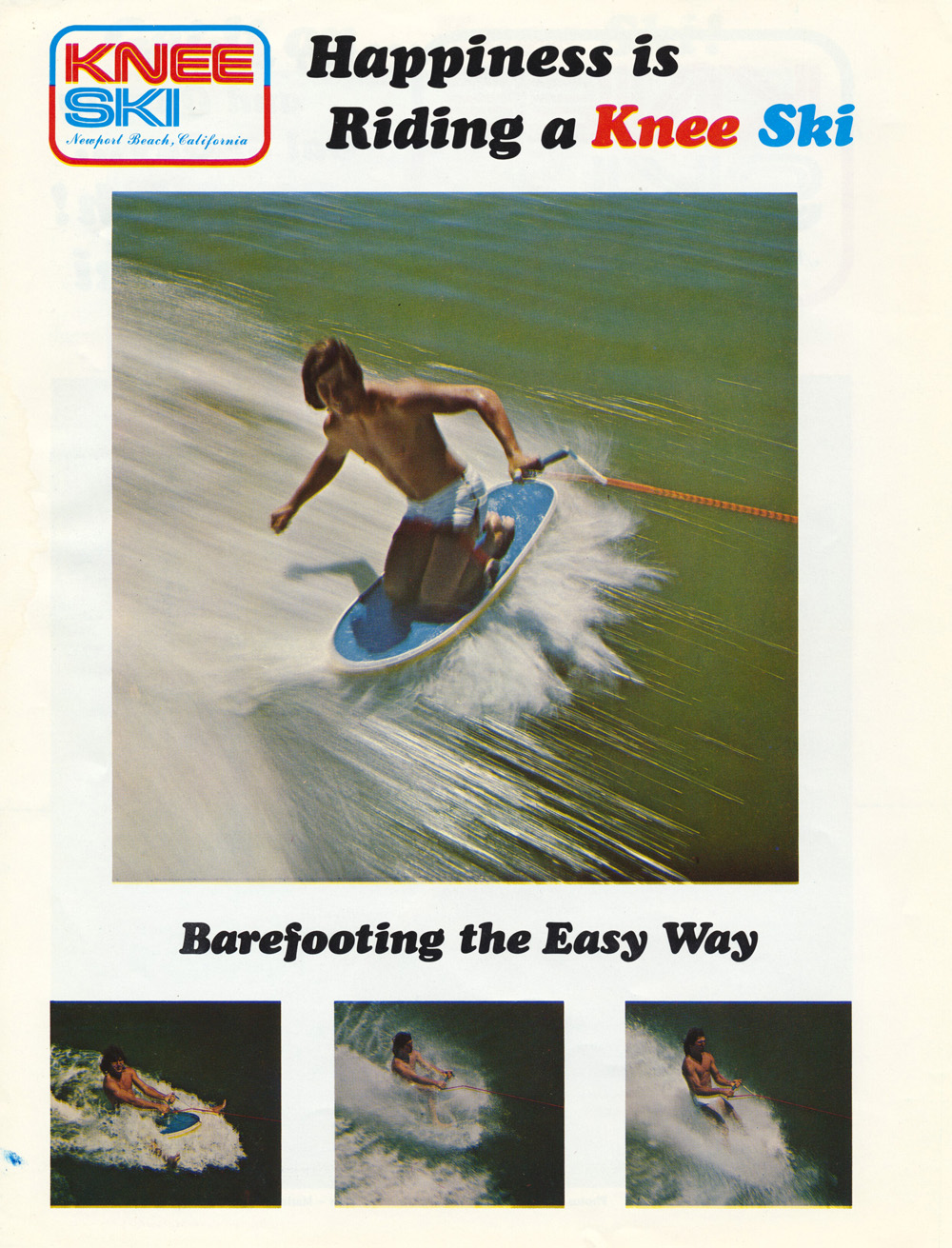 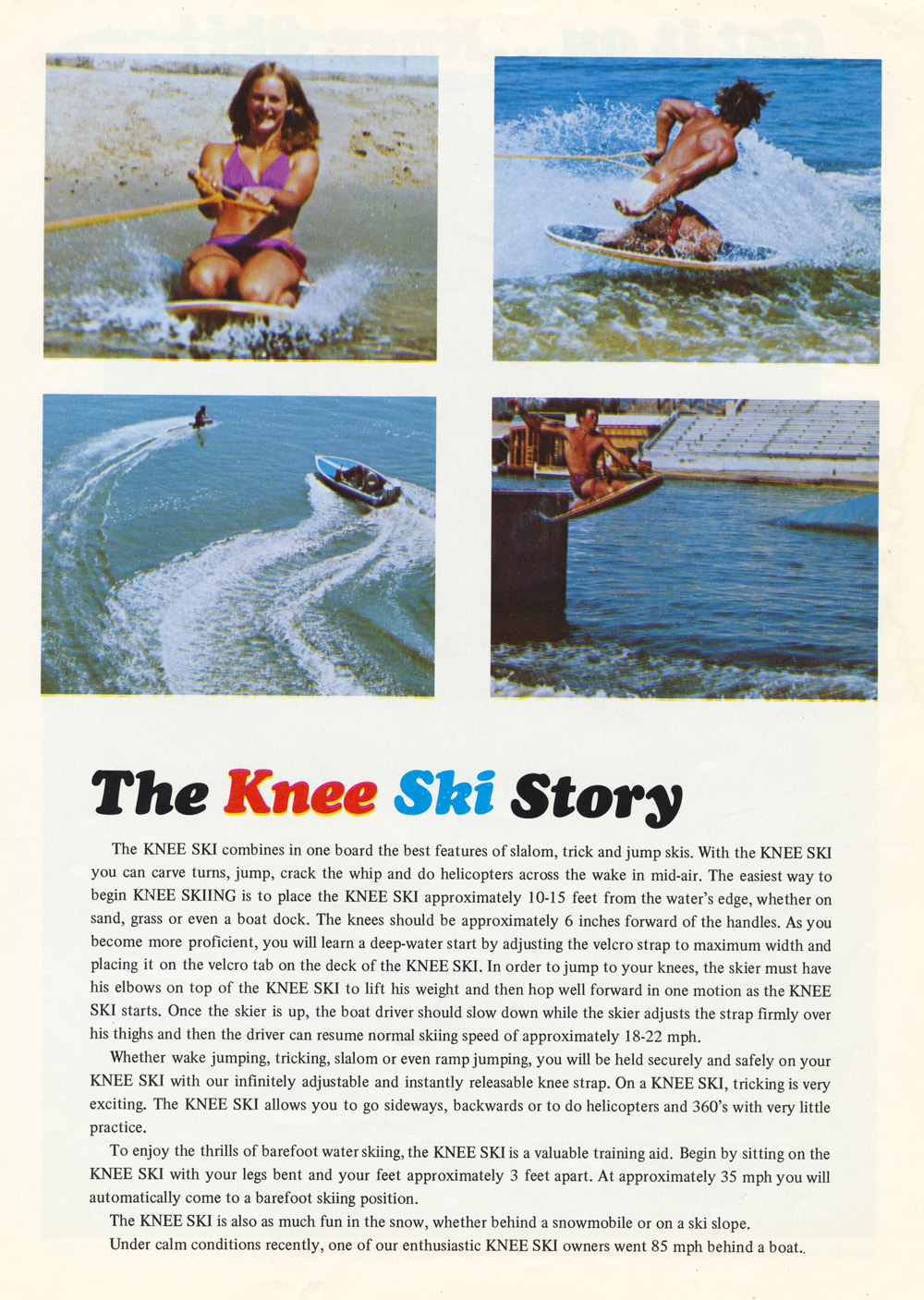 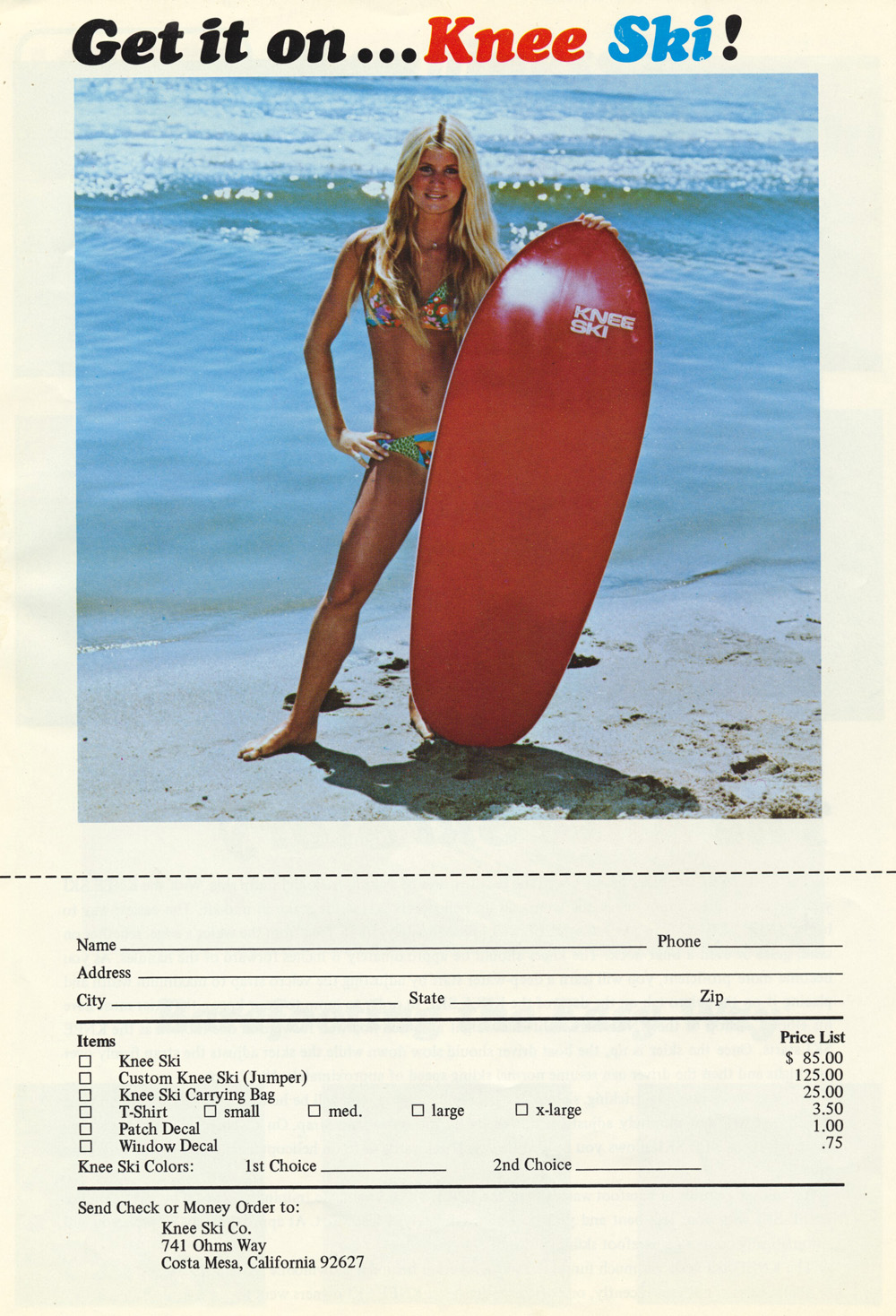