It all started with my uncle, Mike Murphy. He played Aqua the clown for the Tommy Bartlett Ski, Sky, and Stage Show in the late 1960s. One of Mike’s photos was used as a postcard, and as a cover photo for the yearly program. A framed 8×10 even hung in the Water Ski Hall of Fame for several years.

During my formative years Mike’s smiling face stared at me from the mantel of my grandparent’s fireplace as a constant reminder: costumes are memorable. 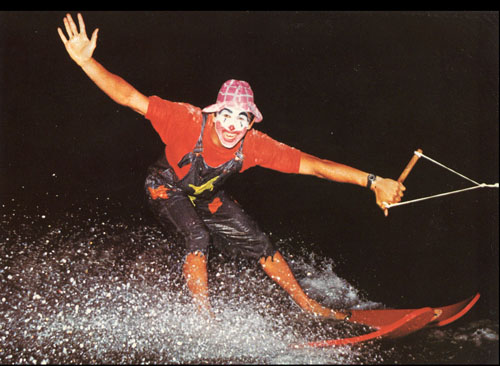 Uncle Mike as Aqua the Clown. Circa 1969

In the mid 1970s Mike taught his girlfriend Randi Tetrick how to ski, and she later went on to play Wonder Woman in the Sea World Ski Show in Orlando. Even though they were broken up by then, it was cool to see someone I knew dressed up as a superhero! 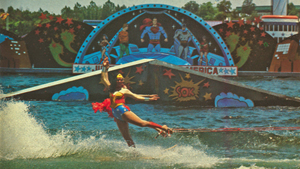 When it came time for my turn at professional show skiing in the 1980s, I was stuck with a pink dress, a wig, and a bonnet…playing Hildegard (who chased all the handsome knights) at the Magic Mountain Ski Show in Southern California. 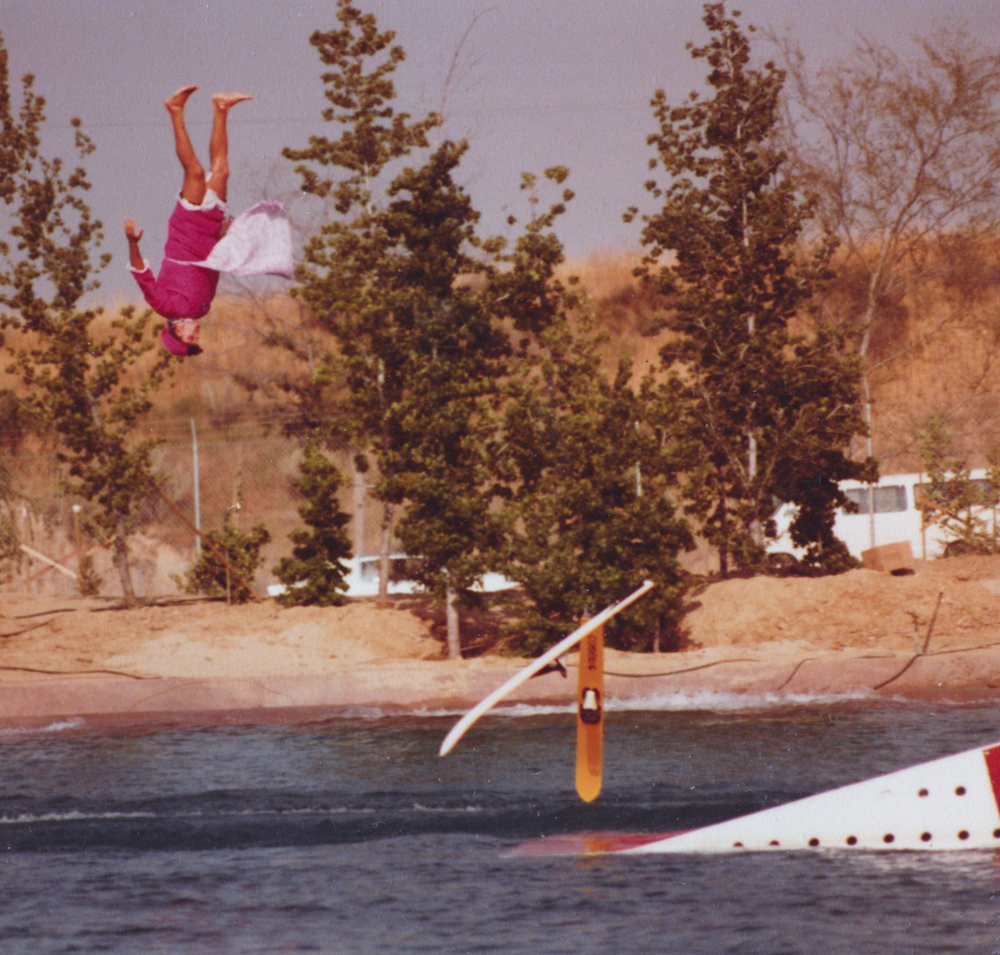 In 1994 I designed the Joker kneeboard for Herb O’Brien at HO Sports, and after first seeing the graphics, knew I immediately would transform myself into the character. Even though my outright skills as a kneeboarder were on the decline, the colorful shots earned me a magazine cover, and a popular full-page ad  for HO. It was my first realization of the power of “smoke and mirrors”. 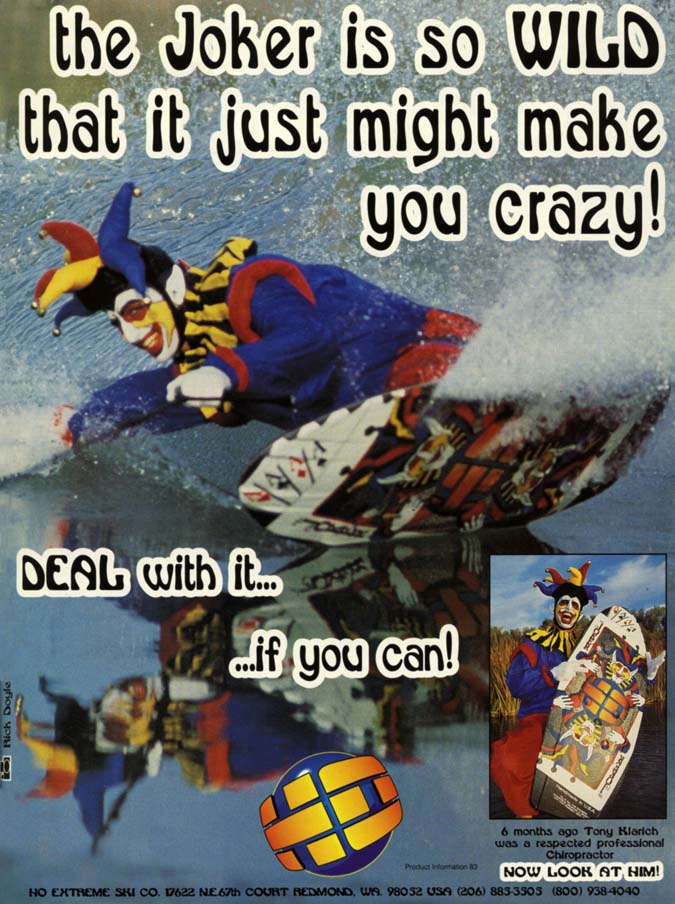 The next revelation in my journey came after a web search for “Alfredo Mendoza water skier”. He was one of the world’s top male all- around skiers for almost the entire 1950s. He is also credited with inventing the double wake cut in jumping.

The top photo in my Google search was Alfredo dressed as a witch flying on a broomstick off the ramp. This really got me thinking. One of the best skiers in the world, and his most famous photo is as a costumed water skier?

It gave me inspiration to try and recreate the 1953 photo as a way to help remember this Hall of Fame water skier. 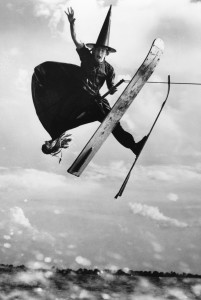 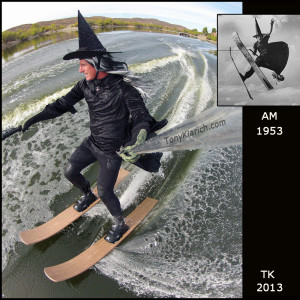 The ah-ha moment came after a trip to the thrift store to dress up my suitcase ride. I had been working on putting together some costumes to dress up my “50 for 50”.  Tony riding suitcase was mildly amusing to the Long Beach Marine Stadium crowd. I could almost here the “that’s nice” from up on the beach. But the when I transformed myself into “Tony the Tourist”, and landed on the beach with a case in hand finish, people literally came down to the water’s edge to take photos. The smoke and mirrors was working again. 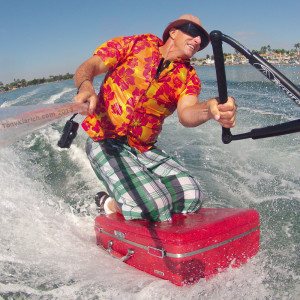 Since then I have added costumed rides as Pukie the Crossfit Clown on a plyometric box as, Baby New year, as Tony Finn (co-creator of the Skurfer), and more.

I’ve even hired a costumer who is now working on a gold morph suit for a “trophy series” of photos, Human sized Twiggy the Squirrel, and Skip Gilkerson style one piece green jumpsuit for a shoe ski tribute ride. 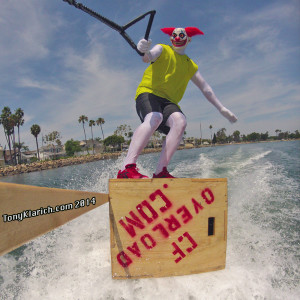 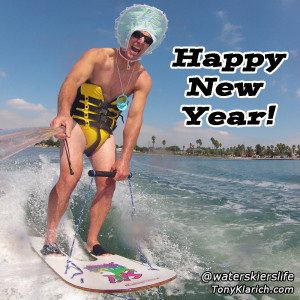 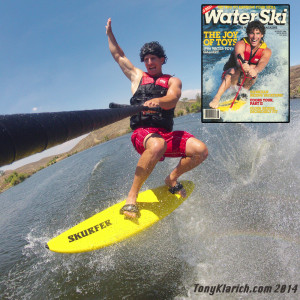 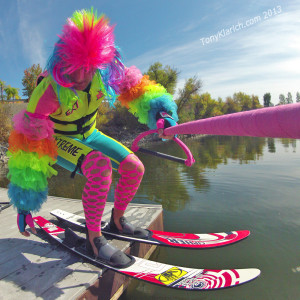 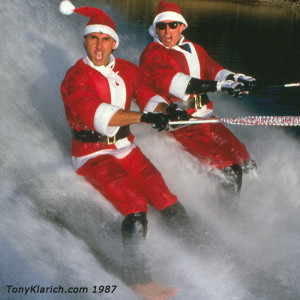 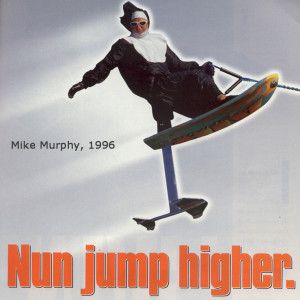